I'm going to report with screenshots in the 2nd post

So it was a very good match for me as I managed to wrestle back the victory from a very bad start and a near defeat around turn 39! I have not yet mastered Dreadnought but I'm getting better at it! But actually, my Theo and Druid heroes play a very very big part in my victory, thanks guys, I love you!

Neither Eskild nor I took a screenshot of the strategic map zoomed out, it's a shame because it would have been great to explain the moves!

I started UG in the East, and Eskild started on the surface in the West.
I played very badly in a Lost Library, like I often do (did the same in my tournament match against Lightform in our first game) and lost all my armies. I don't remember if my leader died or not. But basically, I had no unit left. At that point (around turn 10), if Eskild had been more aggressive, he would have won. But he tends to be too cautious.

I was very lucky because my Dwarf vassal gave me a full stack of units, something like a T2 Cavalry, a Dwarf Priest and 4 T1. The same vassal did this again later in the game and provided me with a stack which lasted until the end of the game. Very nice vassal!

I met Eskild around turn 20 with a Spy Drone. 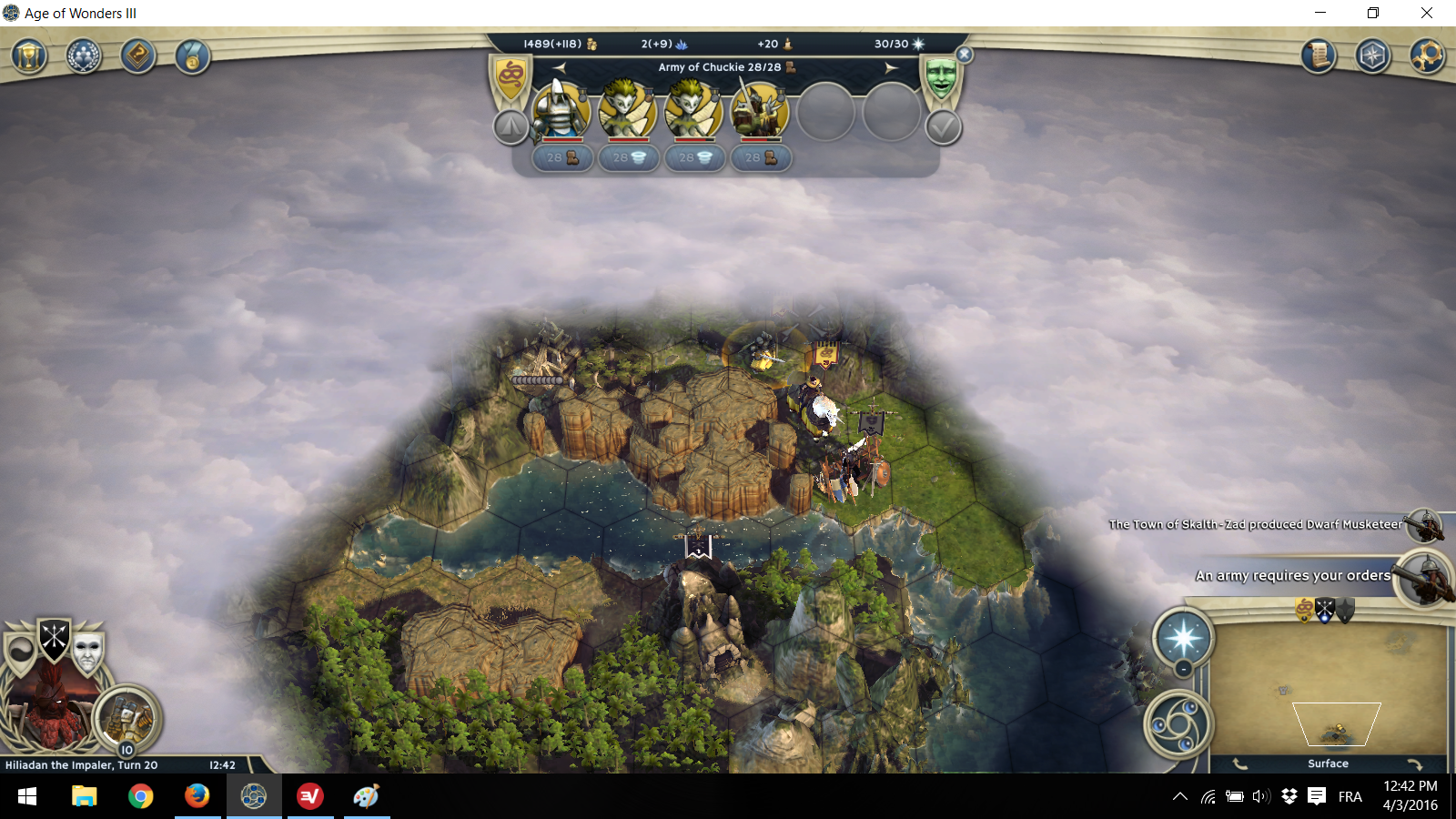 One turn later, I found his second hero (we played with 2 heroes + leader) so I had a good idea where his armies were and it reassured me to develop without pressure.

I kept an eye on his heroes through my Spy Drones. 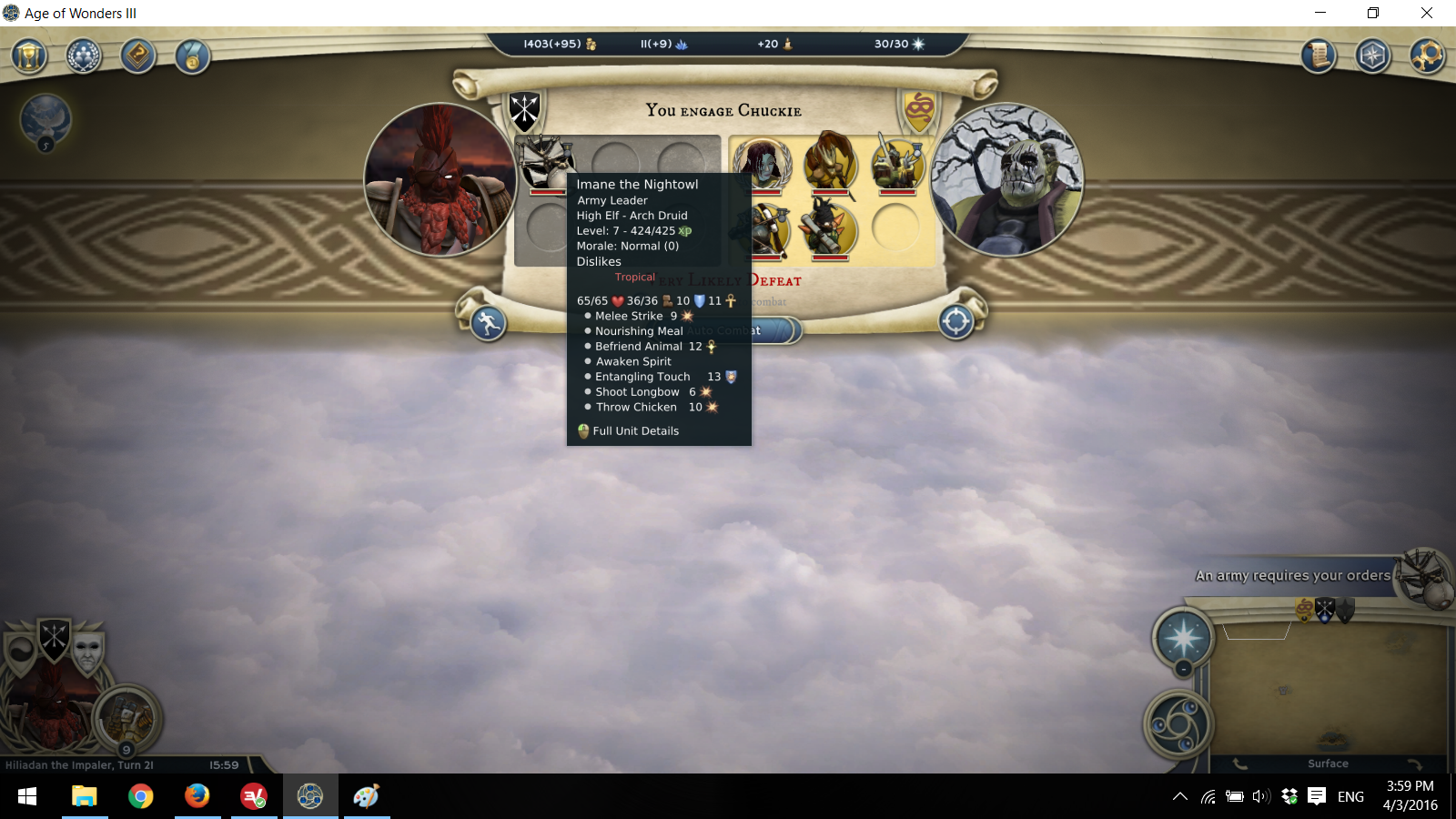 On turn 24, one of his Cherub was spotted near my throne while I was doing some clearing with a newly recruited AD hero (which would later become a hero!). 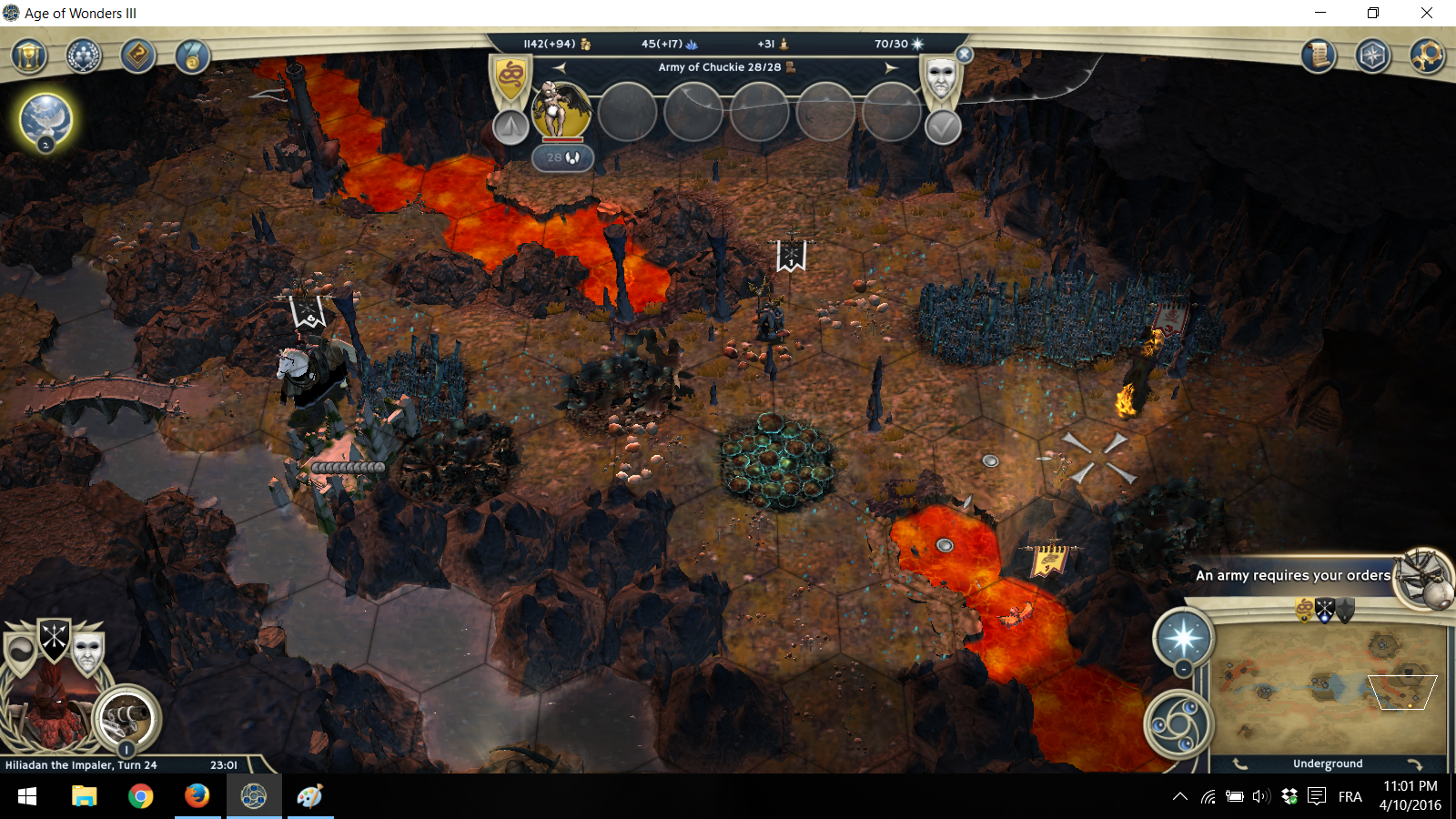 At that time, my leader was at the other side of the map, with my Theo hero and I was getting close to Eskild's throne when I met a Boar that he was using as a scout. I tried to hide my armies but I assume he saw most of it. I killed the boar and then hesitated: should I go for the throne or not? I saw his hero, Imane, retreat, and I decided to be cautious as my recklessness cost me several games against cbower and one game against Eskild before. So I moved back toward my throne in the east, clearing sites on my way back. 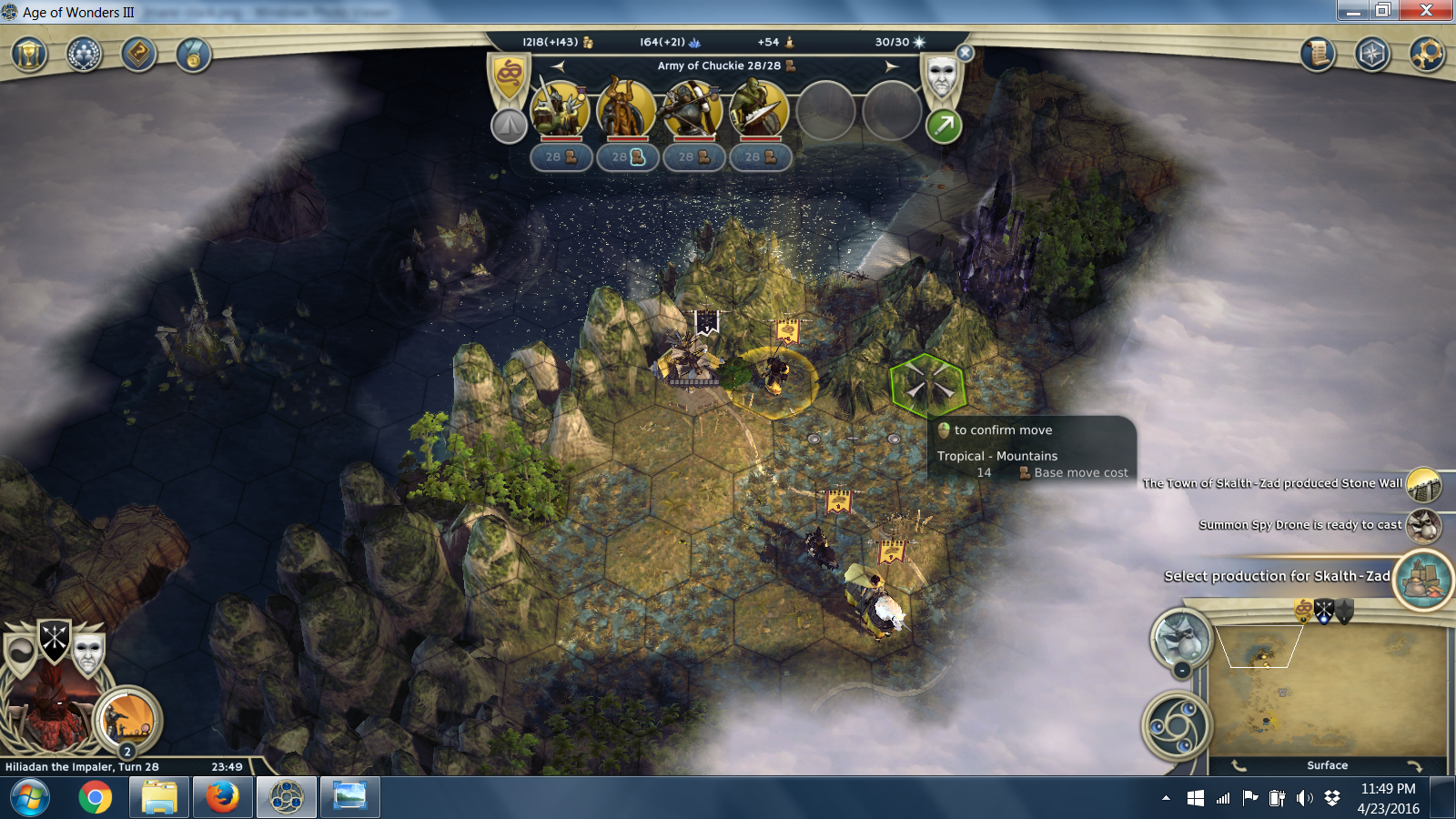 I eventually killed his Cherub near my throne after a chase and the recruitment of an Eagle Rider from an Inn. I thought I was good but the thing I had not expected that early was that Eskild's main stack had moved toward my throne from the surface. I saw his armies appearing and trying to hide near the entrance. Unfortunately, I couldn't really stop it because my AD was with only one stack and had the enemies between him and the throne, and my leader was still far away.
So I prepared as good as I could for the First Battle of Skalth-Zad, my throne. I positioned my units at a narrow passage where only one of his stack could attack. 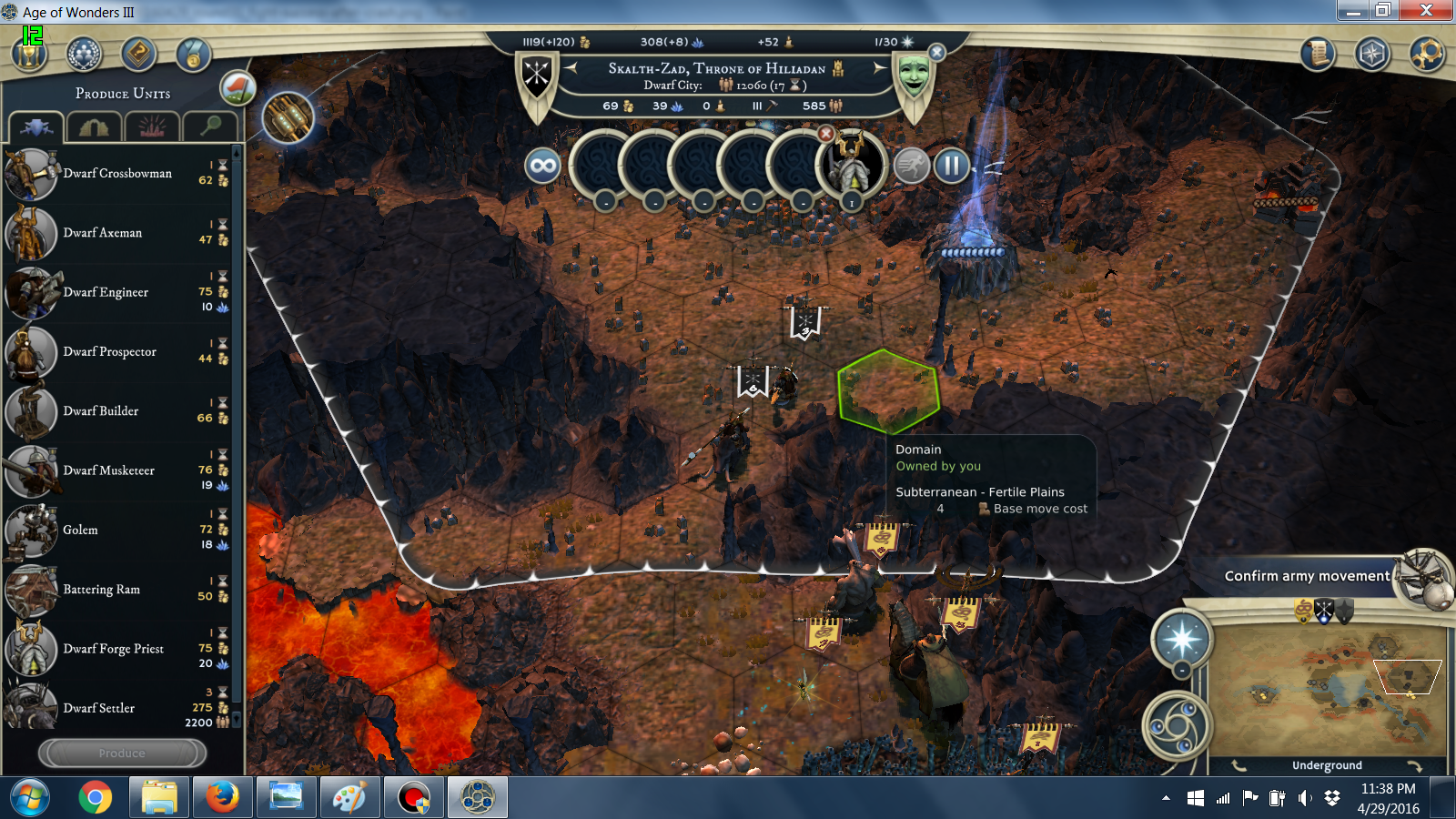 The result was pretty bad for me and I soon lost my throne.
My leader was still only mid-way and I decided to move course as I could not beat Eskild's army at that point, so I moved toward the Center and South. My aim was to regroup with my AD. 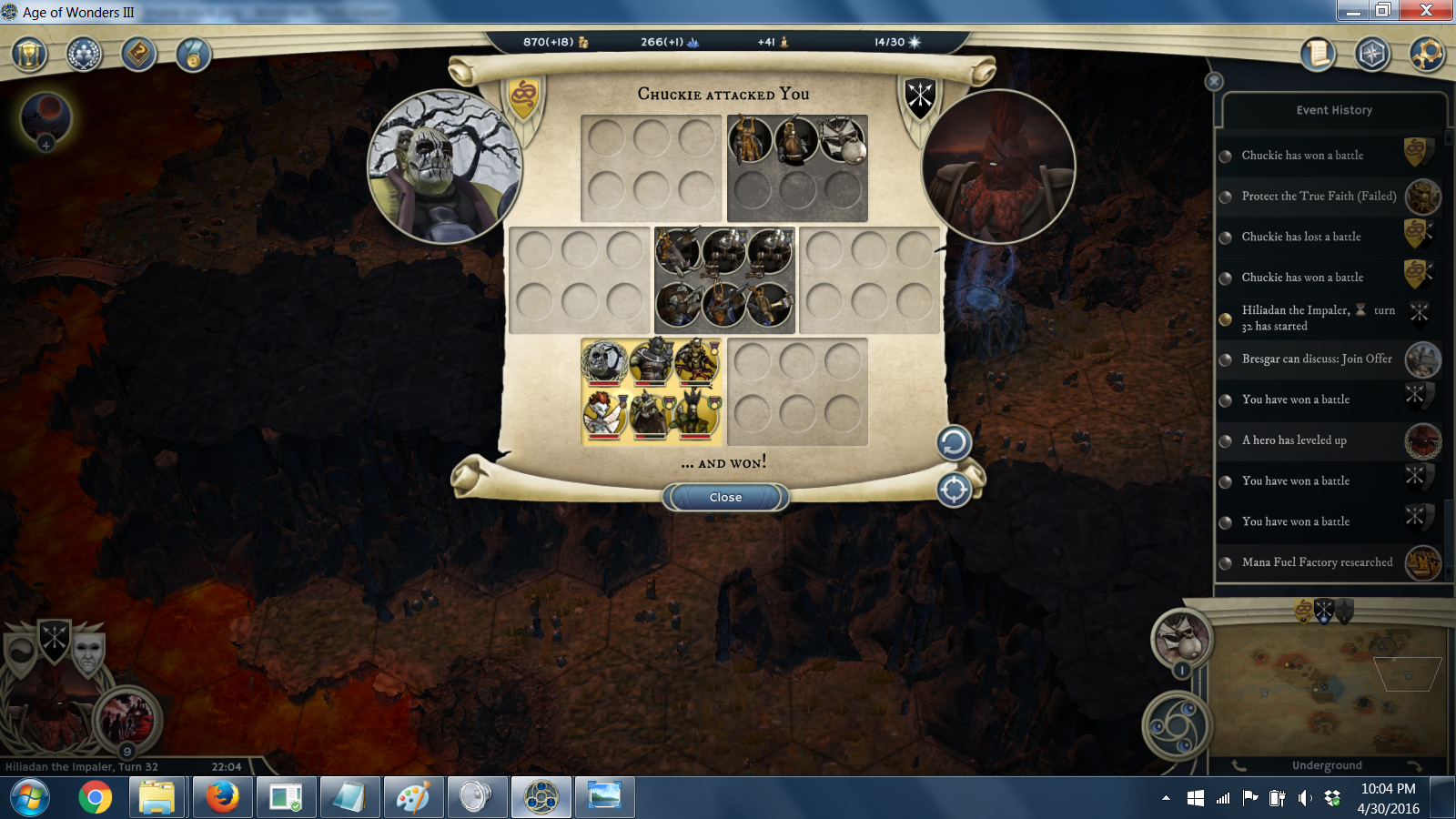 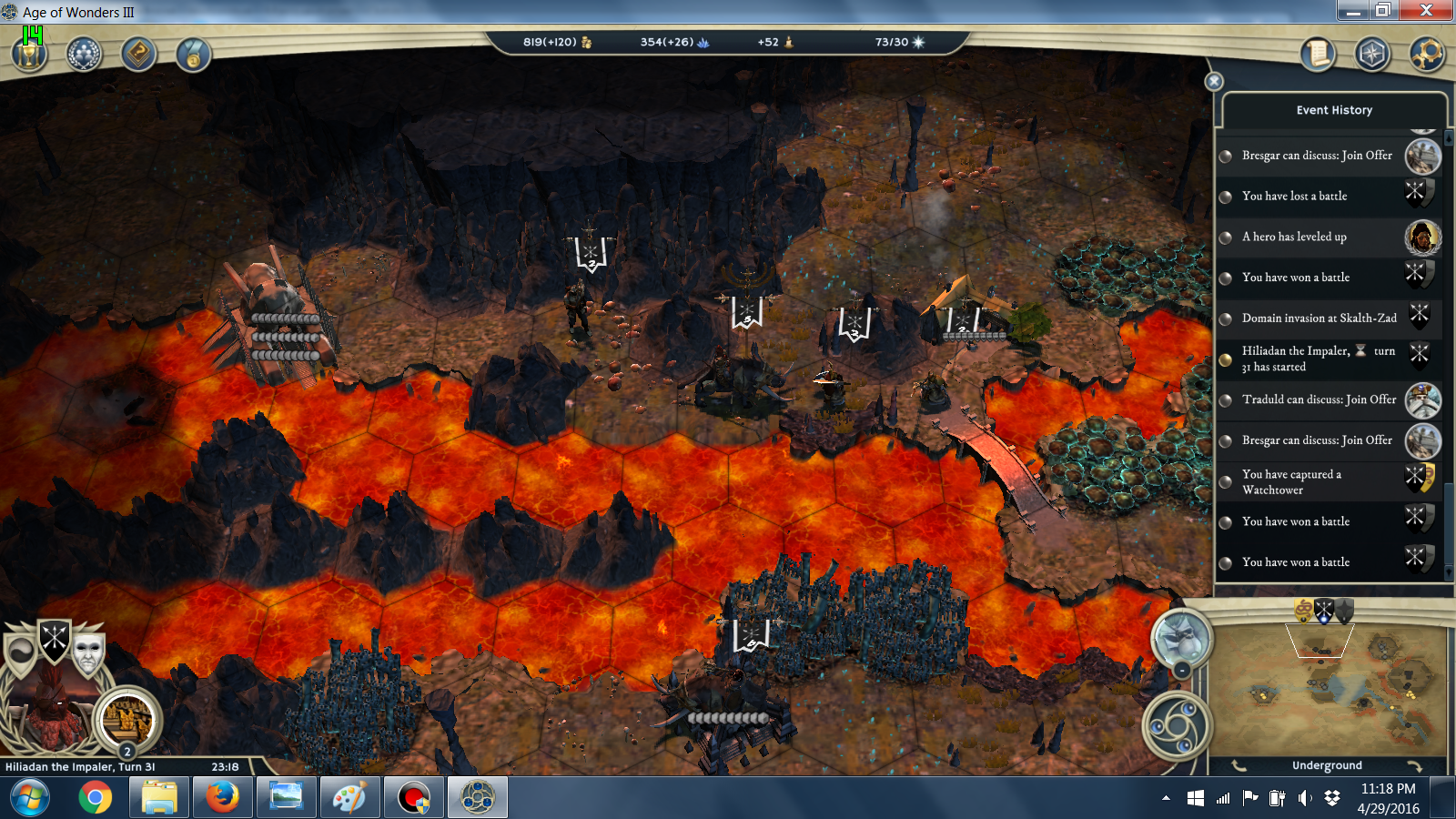 I arrived just in time, when Imane was trying to enter the Underground. Eskild did a mistake in his moves, believing all the adjacent stacks would defend 3 vs 1 if I entered the surface. We replayed it and I let him change his move, but it was still not enough. I had collected some T3 from Inns and I bet him with minimal losses (1 Draconian Flyer was resurrected by Divine Justicars).
I was able to buy units at Inn because I had collected a lot of money when I had few units and I had been Wealthy Empire for many turns.

At the same time, Faeron, his Rogue, took my Draconian vassal in the east. So I had lost almost all my cities and vassals... You can see from the score below that I was almost dead.

However, having beaten Imane and his other stacks being all Underground, I was able to take Eskild's cities without much issue. I secured them (with some mistakes which delayed me) with my flying units, and sent my Theo East to burn his Fairy Dwelling.
My leader was moving UG, benefiting from Dwarf's Cave Crawling, to reach his cities from the North-West and provide units to garisson them.
My scouts in the East showed me some troops moving toward my newly acquired cities in the West. So I decided to burn them down, except ne, and I started to move UG again to take back the Draconian vassal from Faeron.
At the same time, I gathered my flying and floating units (I had gotten Air Elemental from a Pyramid - I think) with my Swimming and Free Movement AD and moved to the North-East to take back my throne. I thought this double attack + Eskild moving with his armies to take back his old cities would probably benefit from him stretching his armies and not knowing where I attack. It worked well!

On turn 48, I was back to business with one city absorbed, my AD quick-attack force close to the UG entrance and my leader + Theo hero starting to move toward the UG.
(+ a Resurgence item for my leader, who had no throne!) 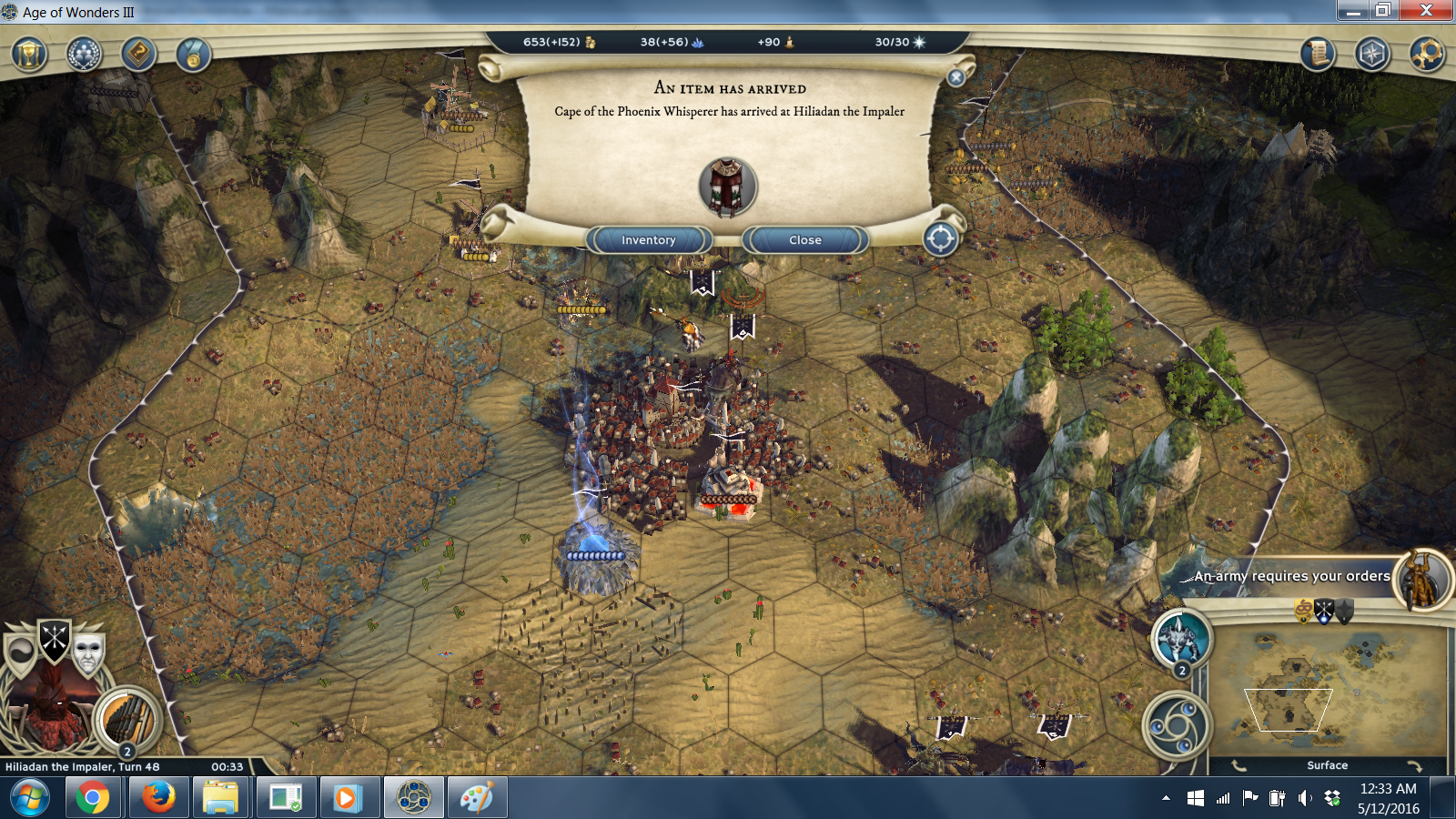 I was able to ambush the troops defending his throne (he had taken Skalth-Zad as his throne, the vile!) with my flying units and took it easily. 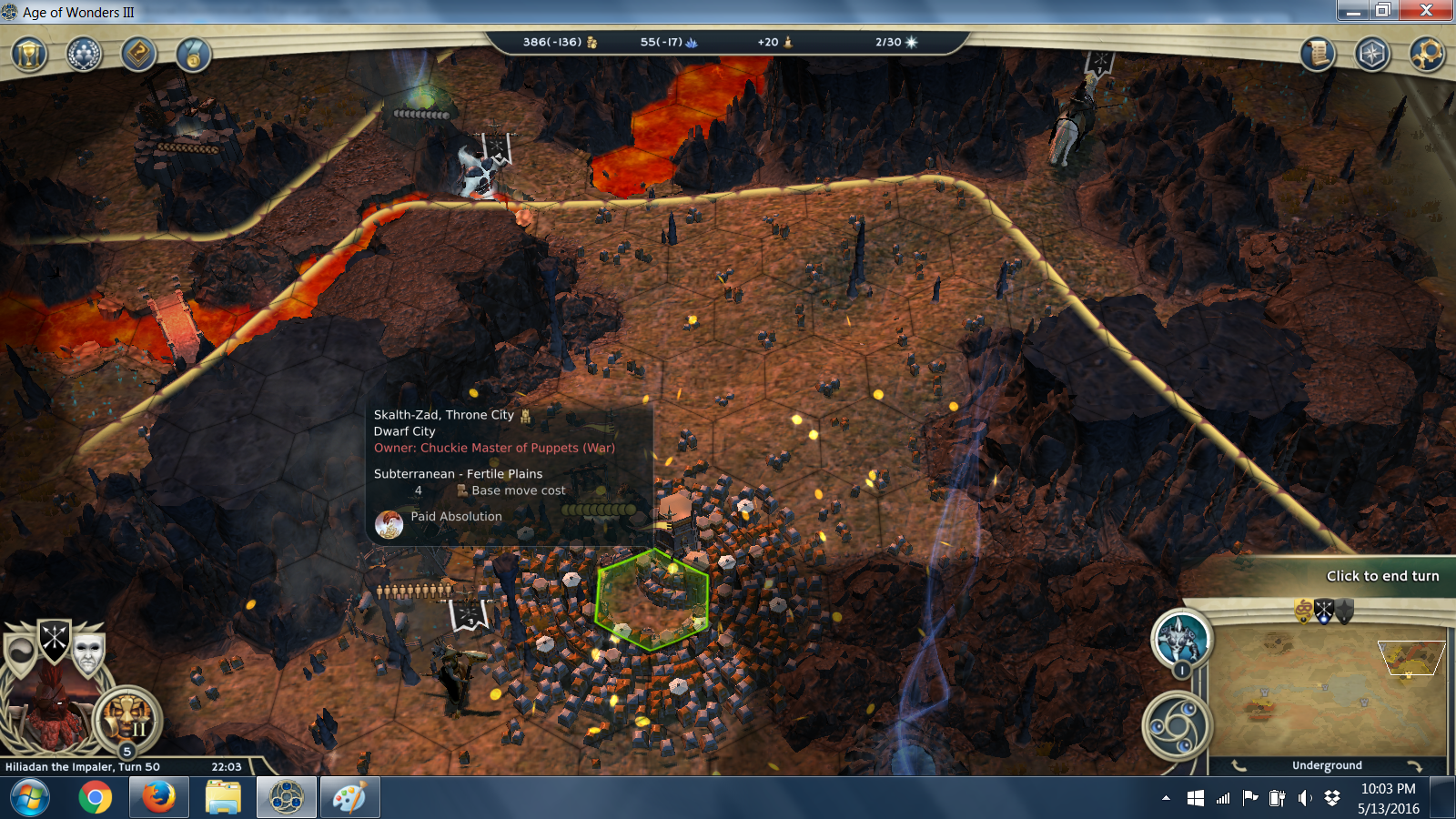 I was regularly checking the progress of his army on the surface and I saw that he detached a rapid-intervention force to try to get back his city as fast as possible. I tried to defend by building Orc's infantry (to benefit from the +1 armour of Dread and because I could 1 turn them) + summoning an elemental but it was not enough and I lost the city.

My AD's stack moved quickly out of the dangerous area near Skalth-Zad and Eskild took it back.
I spotted Faeron who had wandered away from the Drac city. I took the city and moved quickly toward him, using the tunneling of 3 units to position my Theo's stack in front of him in a narrow corridor which allowed only 1 vs 1. Eskild lost his nerve and attacked with 2 stacks one after the other and lost all his units. After the defeat of Imane, it was a serious blow. 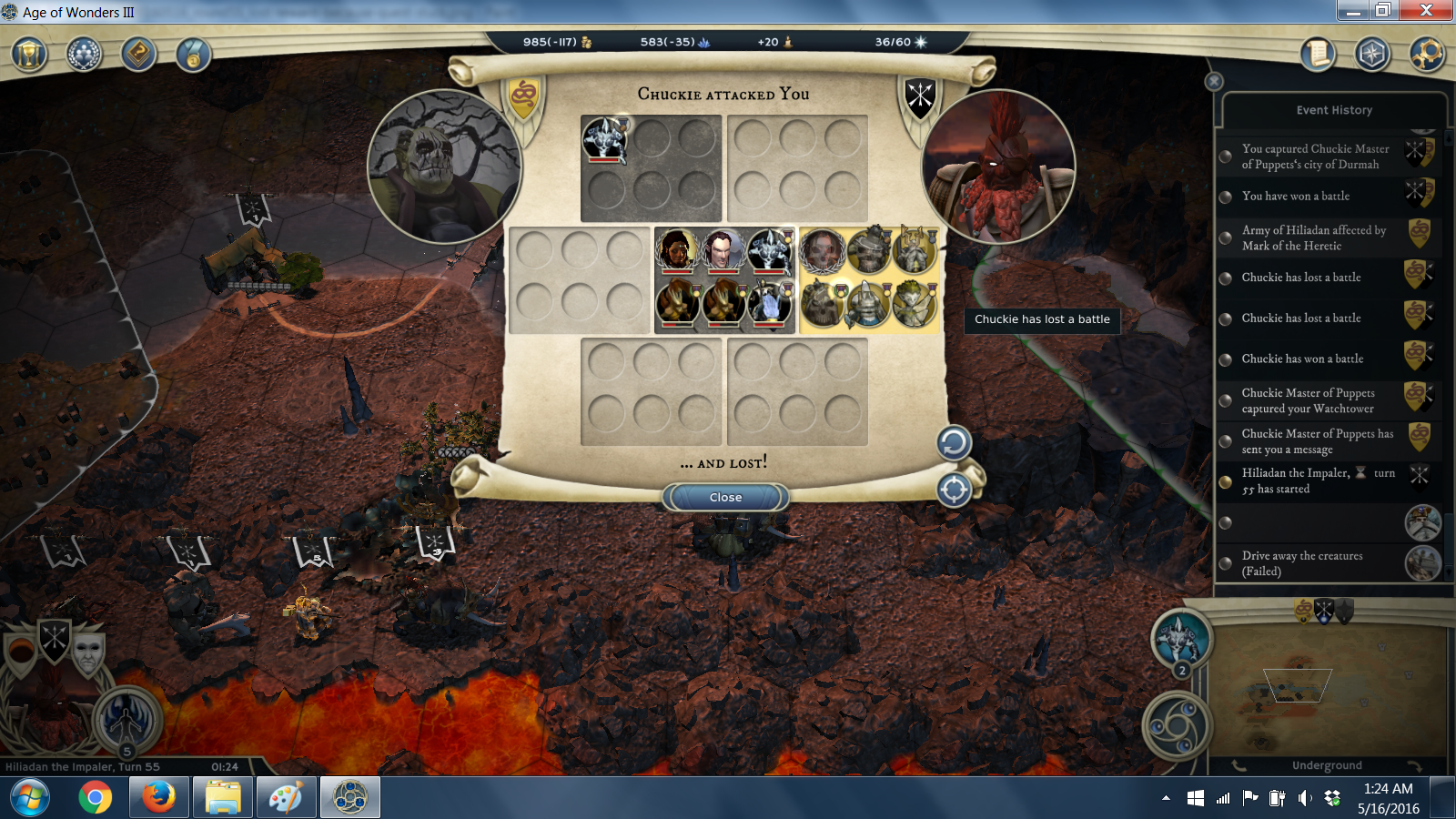 During the suicide battle, one of my flyer did 75 damages to an Orc Priest, I thought it was worth mentioning! 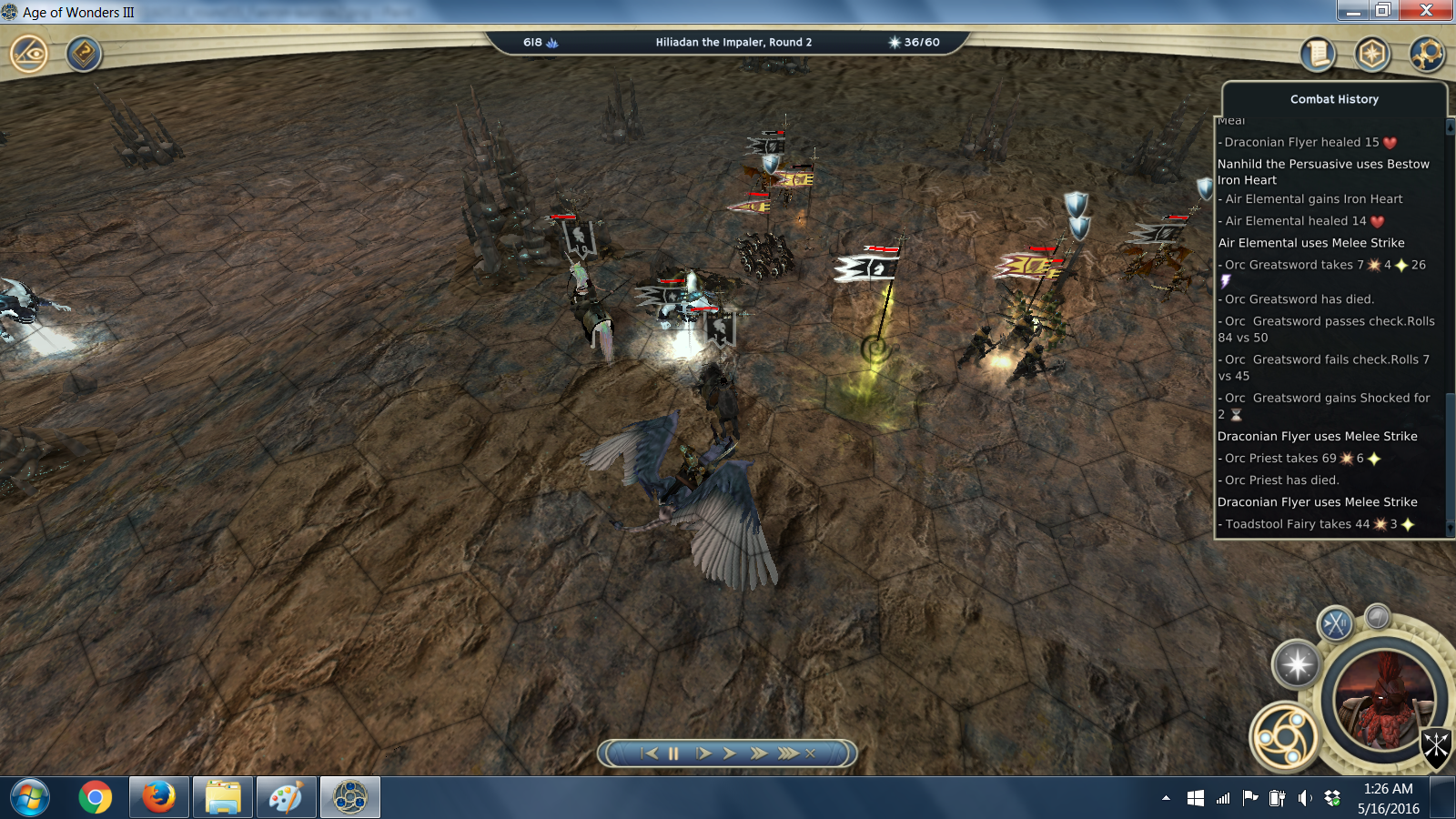 The rest of the game (turns 55 to 63) was pretty straightforward: I sent back my AD with the flyers and floaters to the surface to take back the only city left standing on that layer. The battle was tough and I didn't have one Lord of the Deep I just got from a Sunken City because I miscalculated movements, but I won. I was going to be short on mana and gold but I razed the Drac city with Hasty Plunder and was able to continue. My Theo and leader moved to take back my old outpost + my throne + my old Dwarf vassal. Eskild moved in the other way to meet me for a final battle at my vassal. It was almost close (his stack was good) but I was able to win without too much trooble.

First time I manage to pull out such a come-back!

I hope at least some people read this long report! 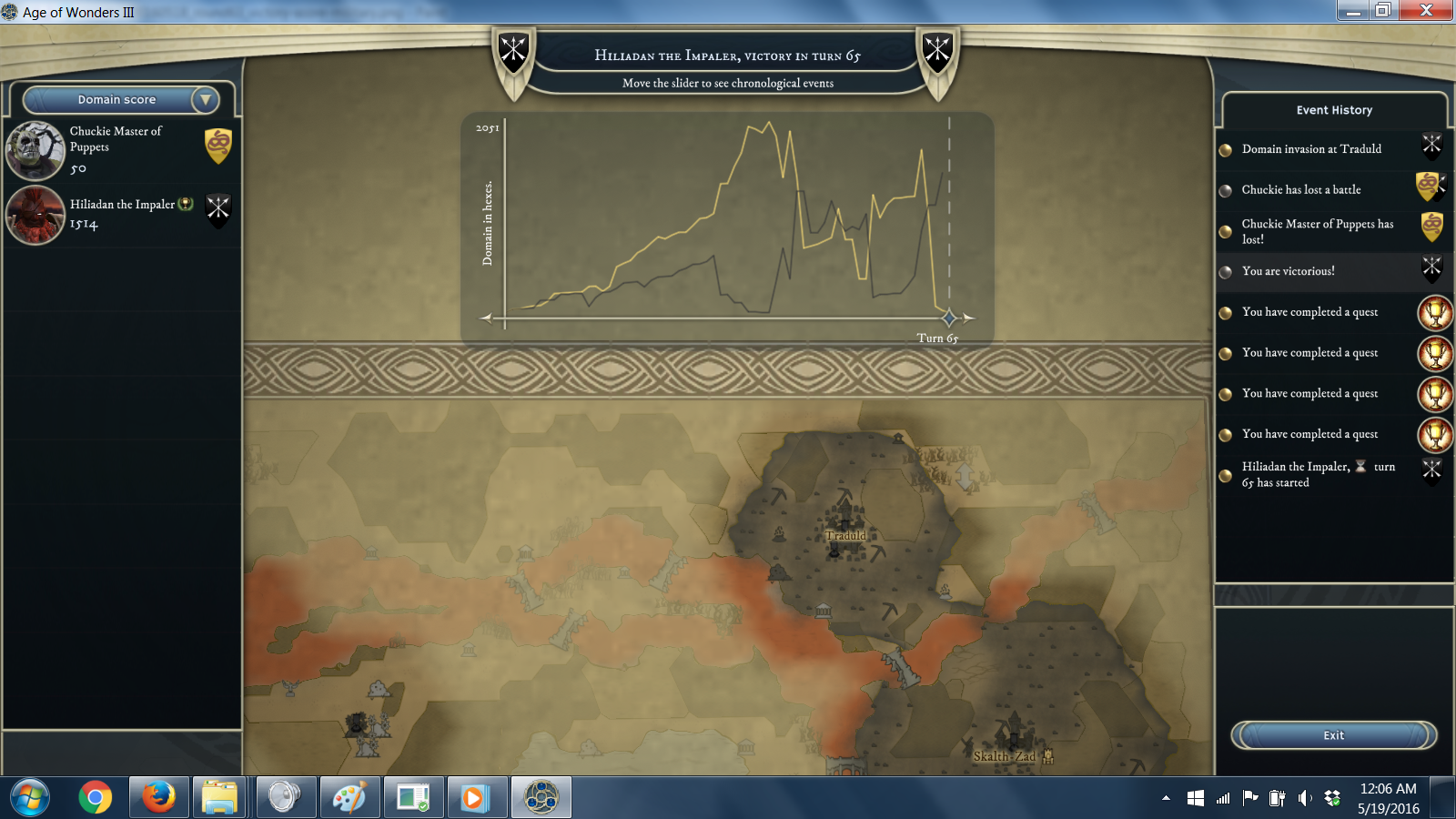 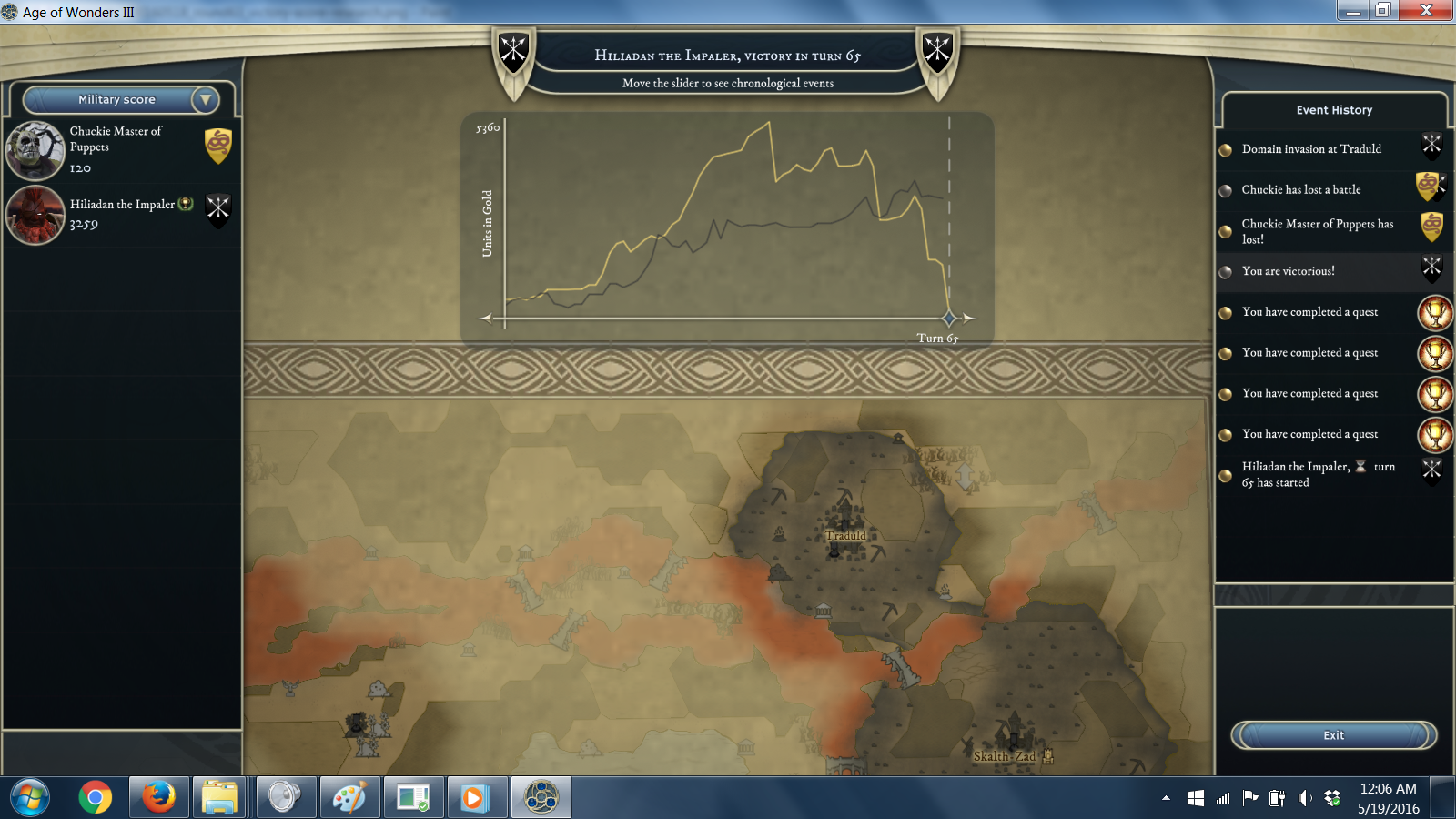 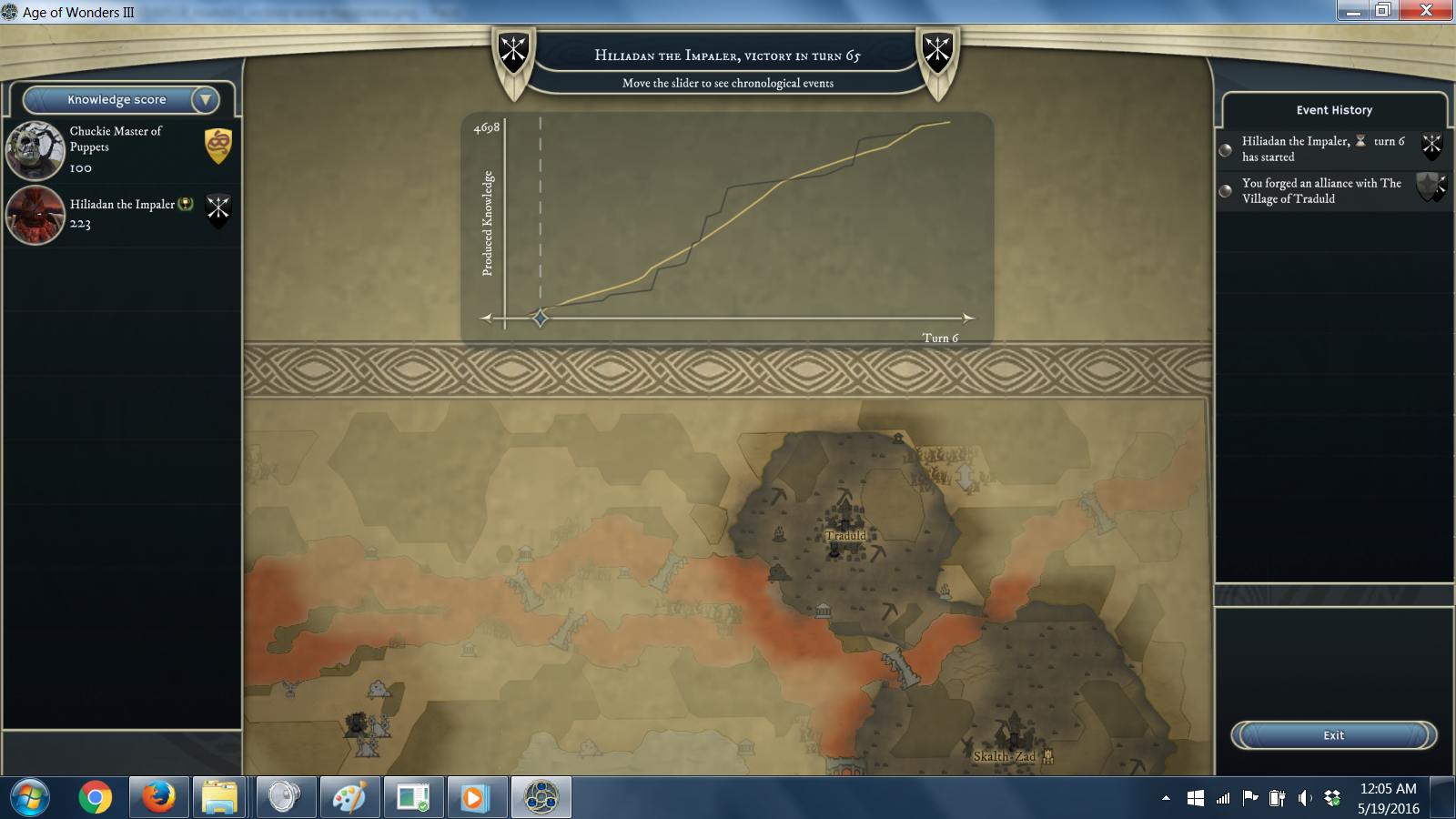 Global score before turn 39 when I beat Imane and reverse the tide! 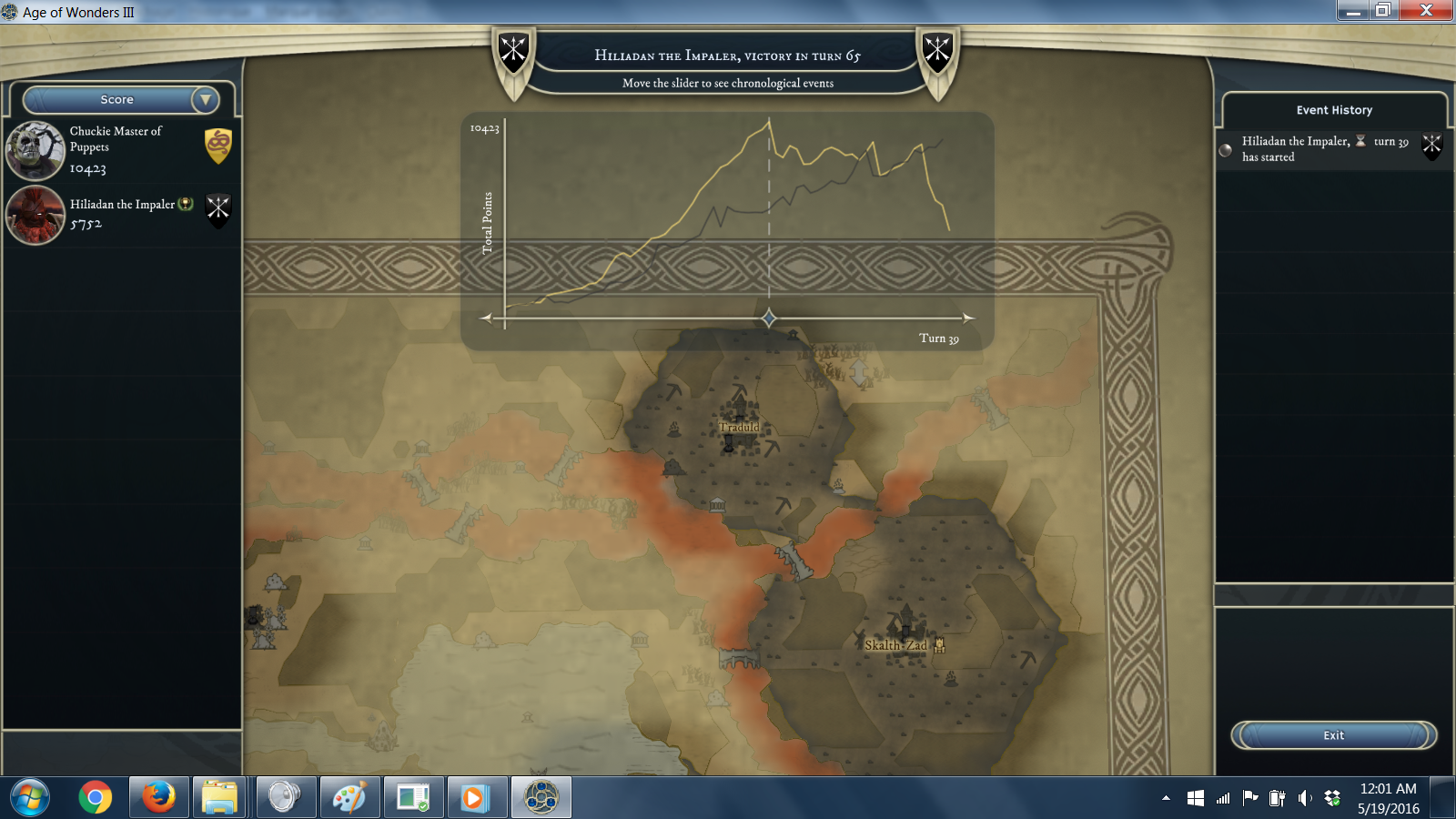 Match has been reported, please confirm!
Back to the game page

Same. Game crashed at the beginning of a fight when I made a click on an unit... Have screenshot but gives indications that should not be shared with you...
So reloading (it was one of the 1st thing I did in the turn so no big impact).

Game crashed in the middle of a fight... I've got a screenshot but it shows my army.
Fortunately, now I'm used to crash and I had saved just before the fight.... Not nice to redo it though because it was pretty though............

Standard settings for PBEM duel tournament. Password is "Hafnium"
Back to the game page