AD is strong due to it's several good point.

But long strider+25% upkeep bonus for animal and summon+serpent evolving+40movement hunter and shaman+heal from shaman has synergy.

Nerfing shaman to t2 building cause almost no difference.

Anyway I doubt balancing ability of community cause they nerfed rogue heavily at 1.29 and still don't want to buff socerror.

To come back to the "main" discussion. I don't see that AD is much stronger than theo but obviously these 2 classes are stronger than most of the others and the fact what makes them so strong is massive healing and conversion. On smaller maps it's not an issue but on bigger maps obviously it is. We nerved theo more than once and AD can be nerved heavily just by moving shamans to the racial t2 building. I made this proposal but atm it hasn't much support. I can't understand why because AD is the only class which get's it's racial t3 for the racial t1 building. Clearly unbalanced if you ask me...

I'm a little bit disappointed that you fall to the novo bullshit keika. Seriously: "If it is fit to process where you reviewing new proposals, it would be good to open discussion about these changes somewhere, so it would be understandable WHAT issue you want to solve and WHY it should be solved this way. And also have an ability to change your mind (3-5%) adding some thoughts.

>And maybe we could add a MCI battle enchantment in Dungeons to avoid the Troll mind-control.
It took a year since I flagged that (most likely someone else also did it and even earlier). So now you changed your mind from "having 3 warbreeds from dungeons before turn 20 is totally ok" to "maybe we could add MCI"."

I hope you are kidding.

Well.. no one focus on class balance.

This game wasn't ranked game but I wanted report it to show class balance.

So plz forget troll and see AD vs theo.

Those are nice tips keika (about how to take the Castle of LK). Thanks. I will try to see if I can apply some of those to my games.

>I'll push back those old proposals for v1.32.
If it is fit to process where you reviewing new proposals, it would be good to open discussion about these changes somewhere, so it would be understandable WHAT issue you want to solve and WHY it should be solved this way. And also have an ability to change your mind (3-5%) adding some thoughts.

>And maybe we could add a MCI battle enchantment in Dungeons to avoid the Troll mind-control.
It took a year since I flagged that (most likely someone else also did it and even earlier). So now you changed your mind from "having 3 warbreeds from dungeons before turn 20 is totally ok" to "maybe we could add MCI".

>If you play DN there is no problem with inflict dead at all
I absolutely don't understand that. Why don't they have issues with invoke death?
As DN you still have living heroes, race units, units got from rewards, living class units. There are few machines in your army for long time and even with them you most likely will not attack castle them alone.

Or you are talking about the stage where you have stack of flame tanks? Then yes, not an issue at all.

Since trolls are no longer available in farms there is no issue to fix with them. The "problem" with the castle of the lich king is not that important imo. No matter what class or race you pick you can choose a theocrat or WL as second hero. If you play tigrans you can easily get a whole stack with 80% spirit protection through a stack bonus. If you play DN there is no problem with inflict dead at all. So if you pick a class race which is vulnerable to spirit damage you should consider this when choosing your first hero.

Ok good point, I was thinking with a 6 unit stack mindset so I didn't see you can get 2 Strong Will which is enough for 2 units.

I had suggested giving -20% Spirit Weakness battle enchantment to the Castle, which would make it more dangerous for your combo, and for Warlord.

I'll push back those old proposals for v1.32.

And maybe we could add a MCI battle enchantment in Dungeons to avoid the Troll mind-control.

>About Castle of the Lich King, you don't fear Invoke Death from the Reapers?


I didn't expect this question from you, @Hiliadan. Answer is pretty obvious - theo has strong will skill and bestow iron heart gives 100% spirit resistance to troll, so it cannot be killed by invoke death and cannot be panicked.
With touch of faith troll has 16 resistance and get 1-2 damage from banshee (even flanked) and very little damage from reapers because of high res and posion resistance.
Well... just test it yourself and you will see.

For everything else it is just a lottery, impossible to take it without risk to lose units which often is not acceptable.
Probably you can take castle with one reaper and be ready to sacrifice some unimportant 1-2 units, but with two reapers I am not sure if it could be splitted and killed without risk. Only if you have some special items or units.

Elite golem with tireless and defender. Maybe will be enough even without force field spell, but didn't test it. will not work because of wail of despair

I don't know how people do the Castle of the Lich King. The Dread Reapers always discouraged me. Then one time in a team game I watched someone clear that site (I think it was Marky) and the Reapers didn't even use their special ability. Of course, when I tried after that, they did use it.. and I lost a T3.

This game never cease to surprise me.

I can barely look at mythical sites and here they just roll through them at the start of the game.

Thanks for the detailed report.

About Castle of the Lich King, you don't fear Invoke Death from the Reapers? And I don't get how just 1 Troll + 1 Theo can beat 2 Reapers and 4 Banshees? You manage to let them attack only the Troll?


First of all, I said AD would be the strongest in 1.30 even before it comes to play.

So ofcourse my  best class is AD now.

I have to say keika played really good in this game.

I lost by my stupid mistake but even without it, very low chance to win as score shows.

similar military with a lot army from MC, much slower units means no chance really without critical mistake from him.

My situation wasn't bad indeed but keika expanded much faster.

What I think the best is seperating t2+t1 units only stack and theo+troll stack.

Some notes about balance patch.

Regrowth is still OP and converting troll from farm is huge advantage (as well as almost guaranteed converted warbreed from dungeons with leader and 1-2 evangelists).

Flying and floating regeneration -12HP on water. Initially I thought that they will lose their HP on water, but it seems that regeneration could not be negative. If it is intended, it is not as bad as I initially thought.

I think this particular AD setup could be even stronger theo, so maybe we will see Novo switching his main class from theo to AD

This game has been played on medium size map and 1.30 beta balance patch.

I picked the very same specializations and race as Novo do with AD.

I basically copied Novo's strategy and tried to play similar to how he usually plays.

I managed to summon two serpents early and so I focused on evolving them. I think I got matures on turn 10 and kings on turn 14-15.
Focused on producing hunters with hurry 1 per turn in throne.

I was not really lucky with first hero I wanted to get, but picked rogue.
I skipped clearing one farm immediately near my domain to get level 7 on my rogue and I was really lucky to convert troll from it.

Quite early I splitted my army and build unit-only stack with befriended elephant, unicorn rider, 2 hunters, archer (from quest) and initiate. This stack was exploring one direction of the map far from my cities and managed to clear many treasure sites including one lost city.

Army at the end:

With leader, two serpents and 2 hunters I built stack which was exploring the opposite side of the map by water.
Cleared a lot of challenging sites quite early including hard sunken city and sanctum.

I was lucky to get second theo hero and with converted troll I build theo stack (?) with two units.

This "stack" followed the footsteps of my secondary army and cleared high lvl sites. Overall these two units managed to clean two castles of the lich king, ziggurat and wizard tower. The only risky fight was in wizard tower since there was small chance to be shocked multiple times in a row by king serpent, but troll had a lot of resistance with buffs and also fearsome, so I think it was really small chance to lose that battle.

At the same time rest of my army leading by rogue hero was clearing middle of the map and eventually went underground where I met Novo's main stacks with leader and sorcerer hero.

Clearing spring of life I got gryphon and decided to find Novo's cities underground with him.
It made great march using haste berries on his way and found undefended Novo's city.

I have captured it and casted scorched earth which I researched on the same turn with help of free research from sphinx temple and vault (had to research two techs to get it in book, but I think it worth it).

Next turn Novo made big mistake and left his throne undefended. There was martyr and evangelist in the throne, but evangelist was one hex far from central city hex (but next to martyr) and so I was able to capture throne with gryphon and spider without evangelist involved in the battle and also casted scorched earth and reinforced it.

I think he placed evangelist on that hex to be able to capture his secondary city if disjunct would be successful and didn't pay enough attention that throne could be attacked without evangelist in battle.

Anyway next turns he was not able to disjunct scorched earth and throne has been plundered.

On the same turn he attacked my secondary stacks with his main stack embarked from water and lost. 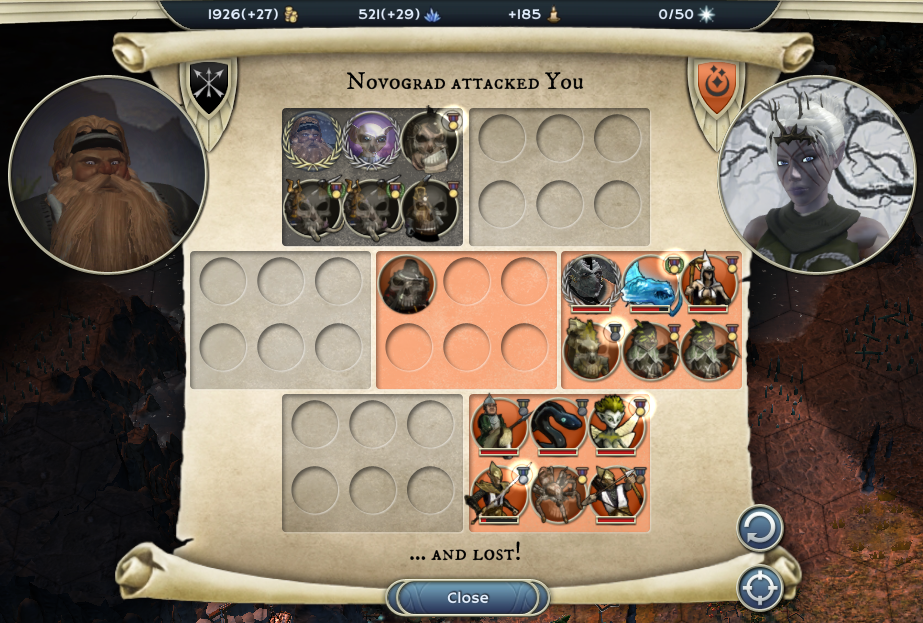 My final army at the end of the game: 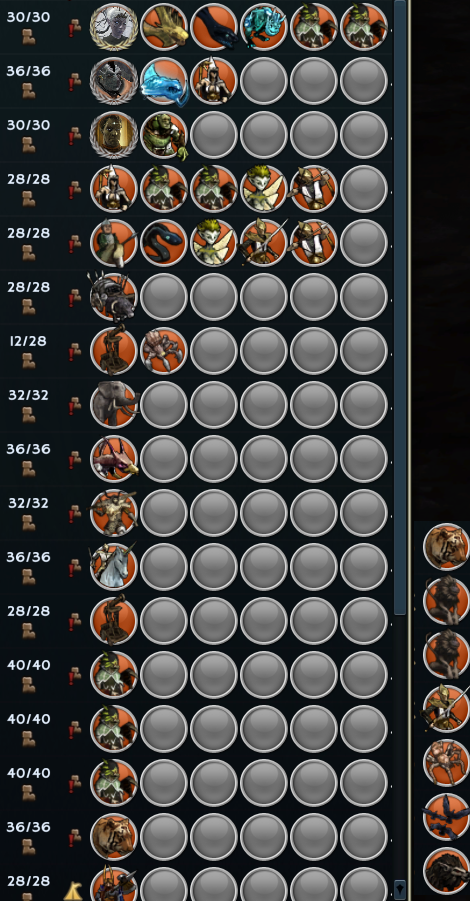 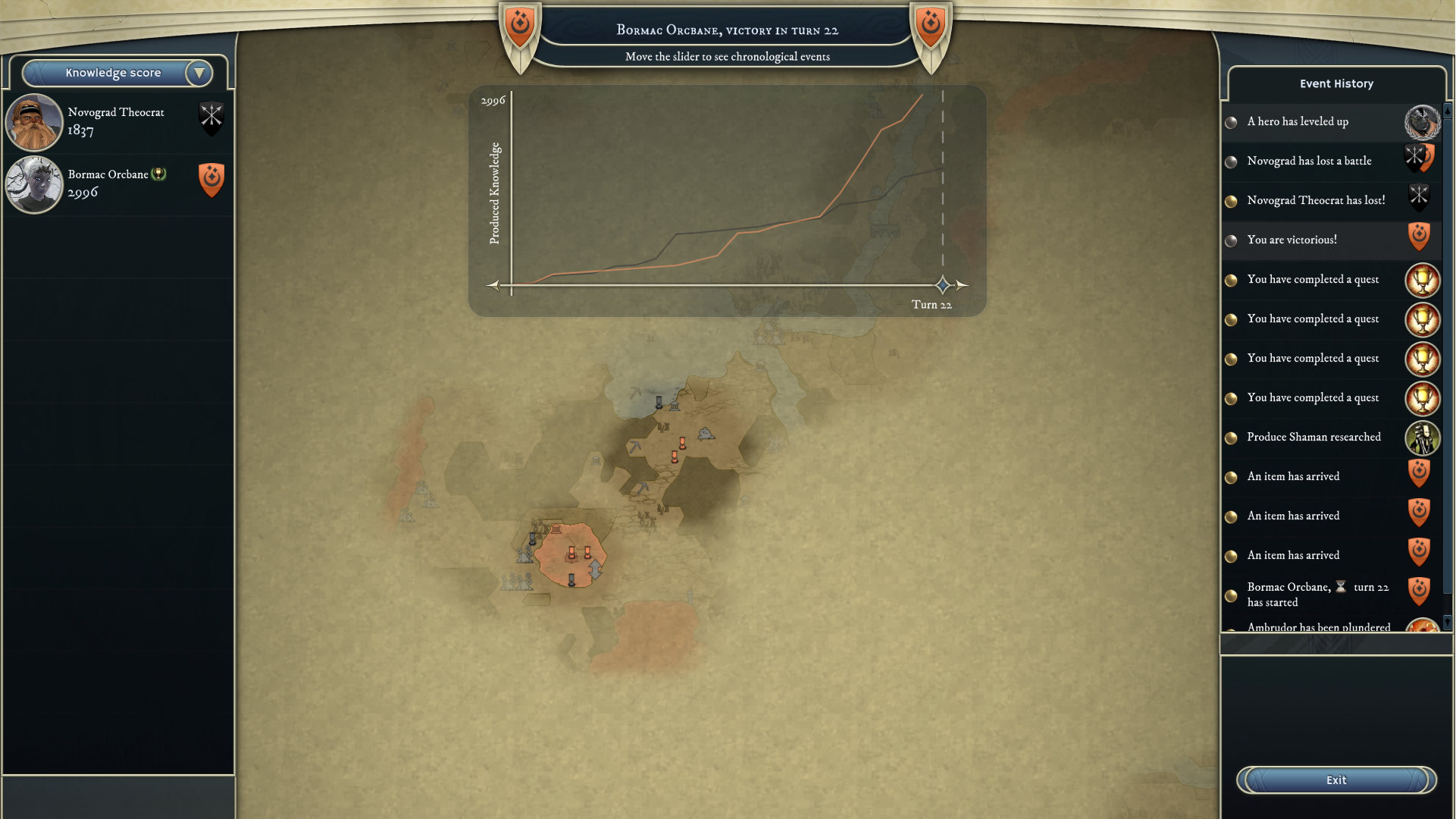 What I can say about the game... elves hunters are extremely OP. With 14 damage and 5 hexes non-penalty range on gold medal they just kill everything. One hunter can one-shot tier2 and two hunters can kill t3. With 40 MP with long strider, they are just super cheap killing machines.
Published on Tue, 29 Sep 2020 20:46:43 +0200