I think I lost this game due to poor strategic choices, I had a real good start, I was able to level my heroes and leader decently and didn't lose too many units. I was expanding rapidly and getting some good units from the dragon dwelling. I did all well until about turn 15, I started to get greedy with the structures I was taking and lost too many of the tier 2 dragons I got from the dwelling, also lost some apprentices trying to take a tomb. I couldn't scout Sin's territory very well so I was blind on how his economy was.

I think I had a better army than him when I attacked him the first time, but the issue was that I moved my units and found his army, I had no chance to run away, so I decided to attack.

I've been having a lot of issues scouting with sorcerer, the reason is, if I summon a Wisp, I sacrifice precious CP that I need for a phantom soldier or any other summon, I think the fact of not knowing what was Sin up to led to my defeat. Another issue I have with Sorc is that I believe from all the classes, it is the one that gets affected the most by losing your leader, those 3 turns after I got defeated in our first encounter felt like an eternity.

WP Sin! I think you managed the necro really well, I would like to play a 2vs2 as an ally with you to see what you do. I have no idea what to do with the necro!

I gave a go to Necromancer and Tigran. From the get go I was struggling with mana, even though I had a starting node and then another near my throne. Upkeeping the three Lost Souls took, more or less, all my income. Because of this I postponed researching Banshees, and went for passive abilities instead.

During my scoutings I spotted a Dragon Dwelling that was on DrLight's half of the map, and he was already at peace with them. Unfortunately I couldn't get to it to do their quest before he vassalized them. On my way there, halfway on the map, DrLight jumped at my army. I had seen sign of his army nearby but not that near. The battle didn't go well for him, mainly, in my opinion, because most of his units were already hurt. 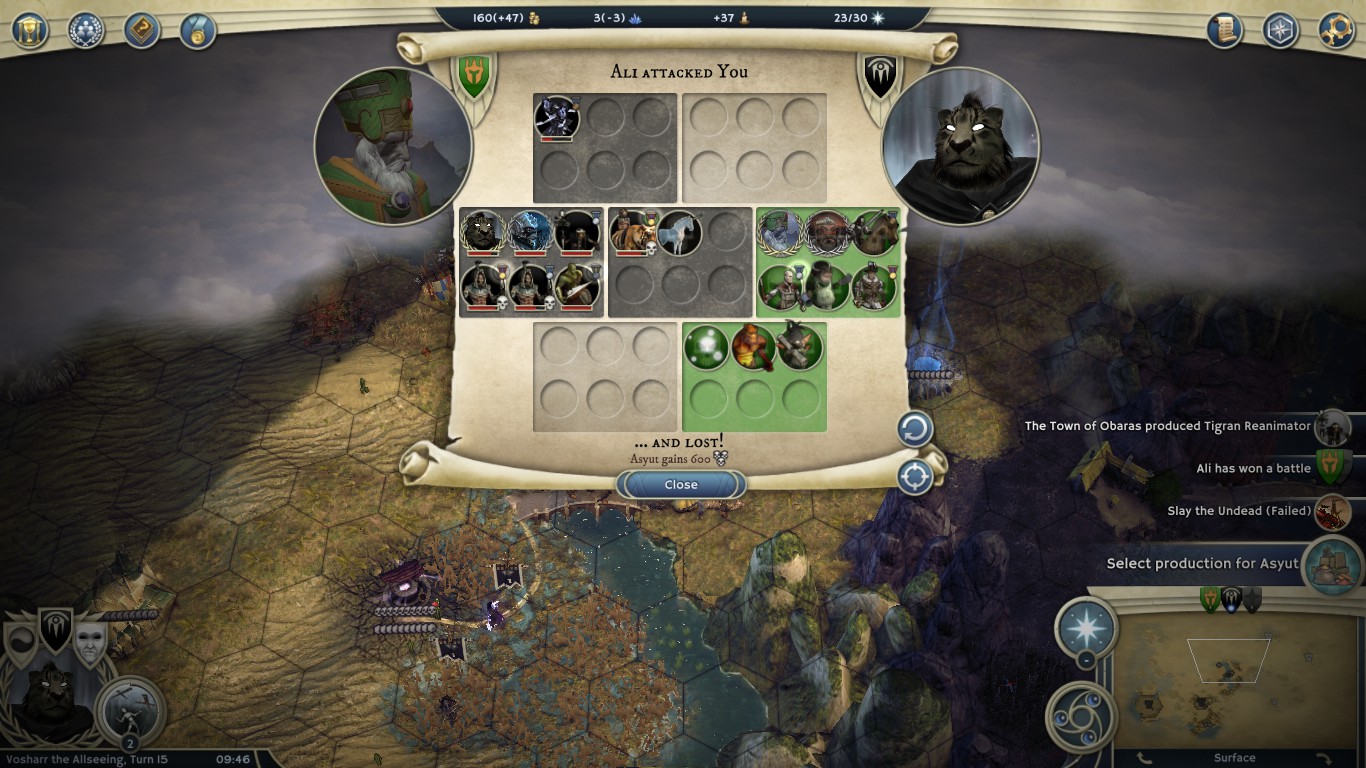 Since his main army seemed to be out of the way I advanced on his cities. I took two of them. I should have just tried to raze both, maybe then I could have done some lasting damage. As it turned out, he had a bigger army still, which, with his leader back from the void, he defeated mine. I also have to note that again I didn't know when to run. Or.. I knew but I still didn't, and took my chances. 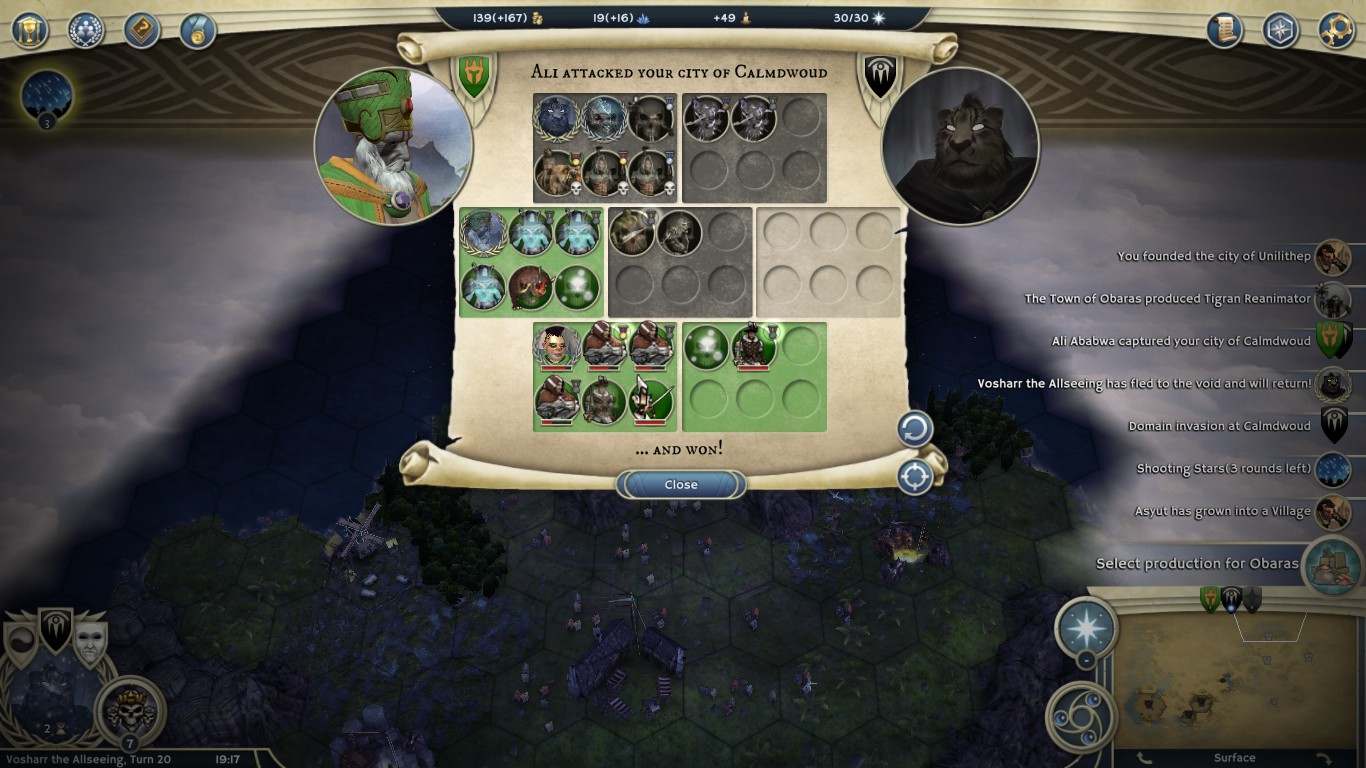 At this point, DrLight had two expansion and a dwelling, I was aware of. In comparison, I felt my economy (same amount but smaller settlements) was really bad, so I expected that on the long run he would out-produce me. I also had few units left after that battle but fortunately I could buy the T3 and a T2 from the Tavern, DrLight had cleared, sooner than he. So with those I thought I might have a chance against him if he marches against me immediately. He didn't.

I spent 10 turns clearing sites, upgrading cities, and replenishing my army. Then, pressured by the notion he had better aconomy, I started toward his closest city in hope I could raze at least one (before his army would show up). I spotted one of his heros south of the Dragon Dwelling, so I figured I had some time to take that one city. Around this time I also noted that his leader was in the void, and he cleared a Tomb.

I took the closest city. When I scouted further I saw the aformentioned hero, some Apprentices, and other smaller units running northward, all scattered around. I managed to catch them all. DrLight tried to exact swift revenge and attacked me with only what he had within a turn distance the turn after. 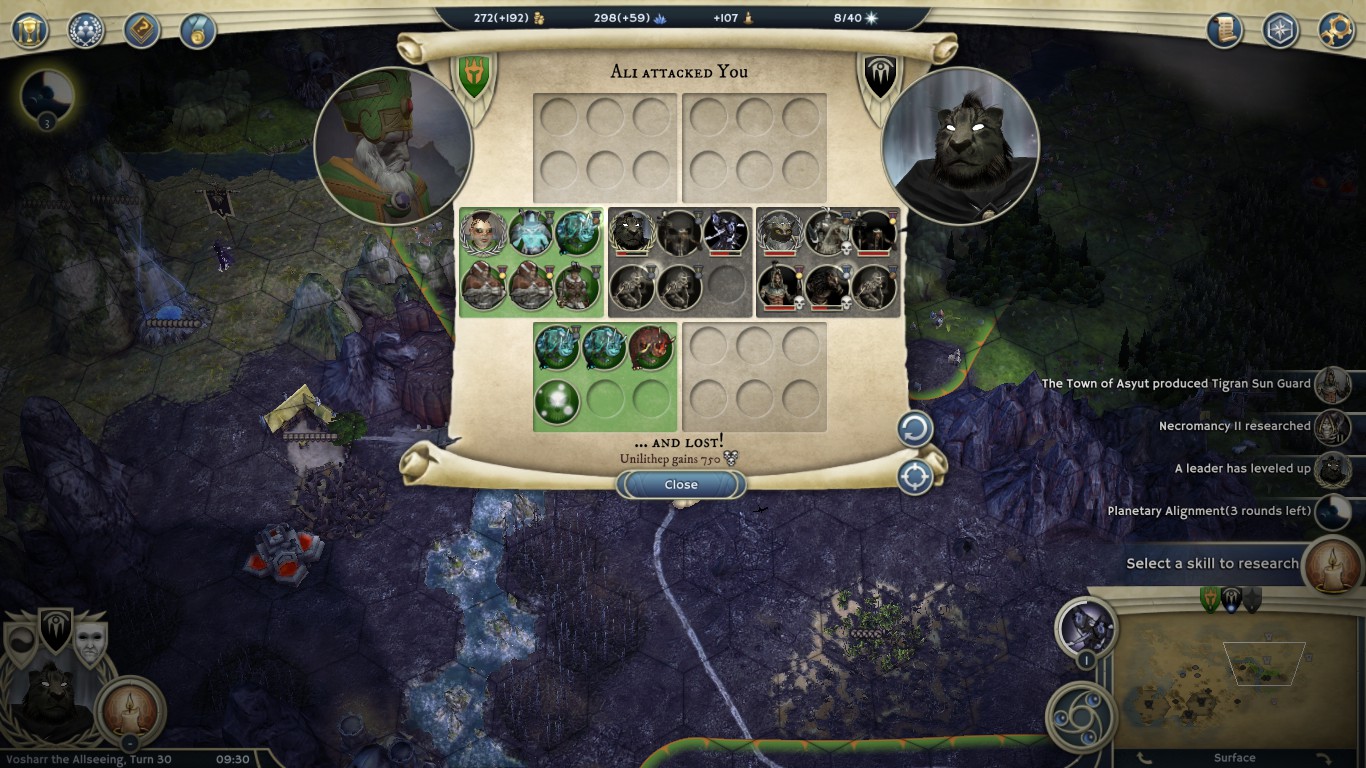 I think it was a grave mistake, considering he had more army showing up a turn later. So if he had waited two turns and united these two armies he would have been able to defeat my army, in my opinion. 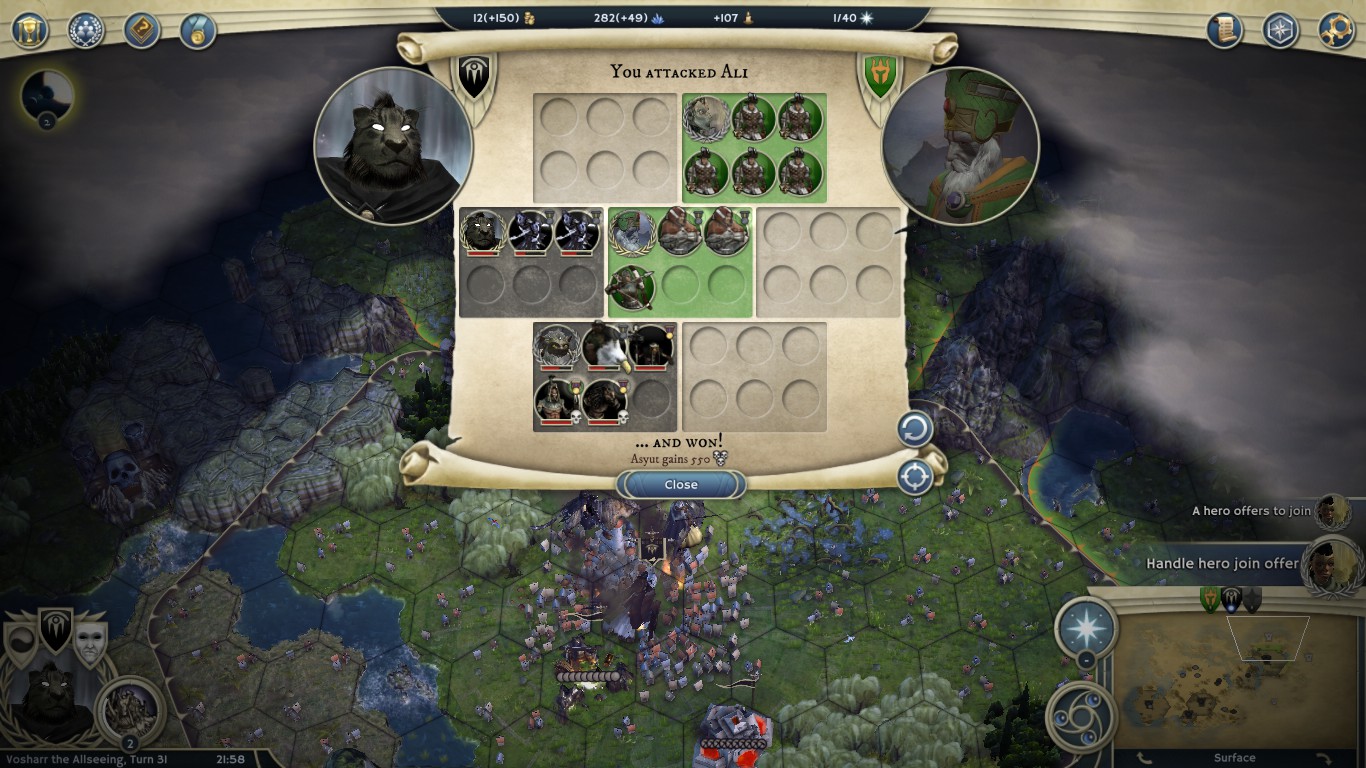 I think, overally, it was a good game. Thanks DrLight! 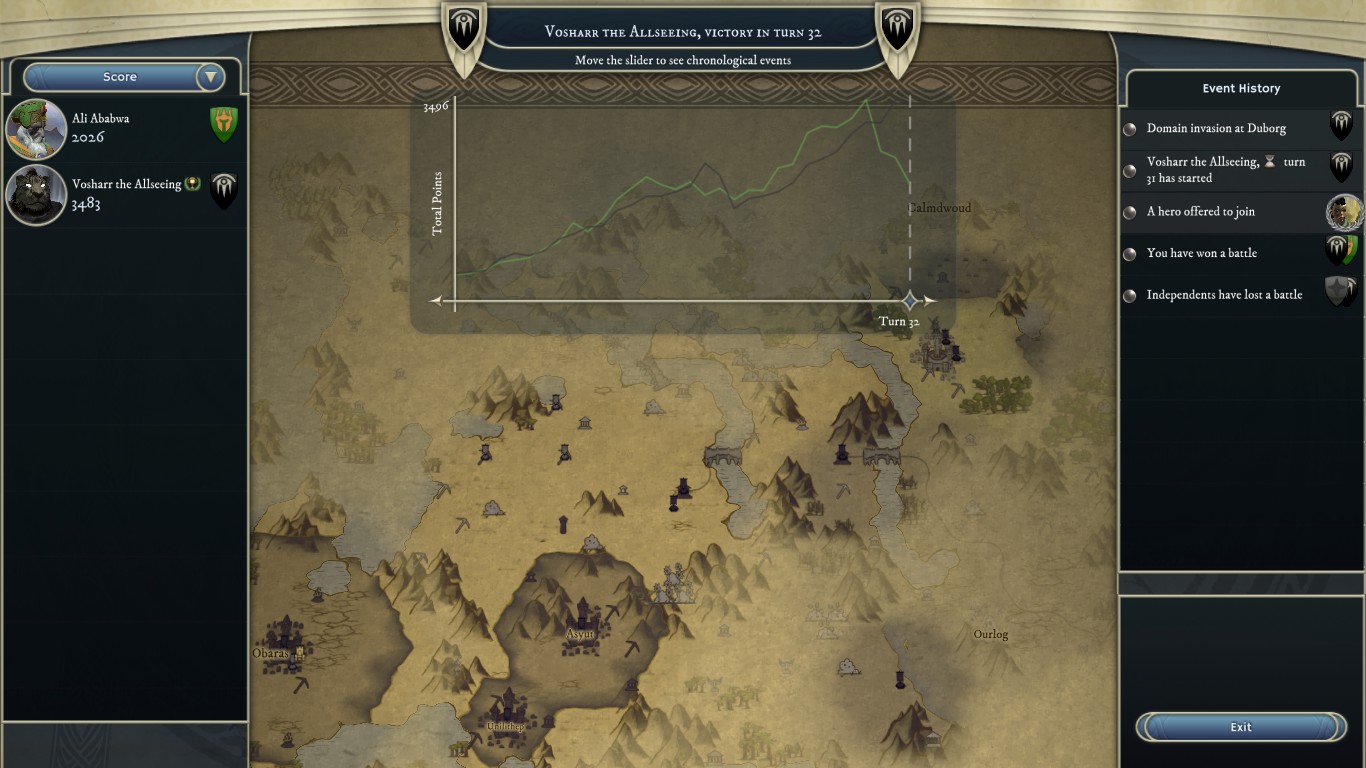 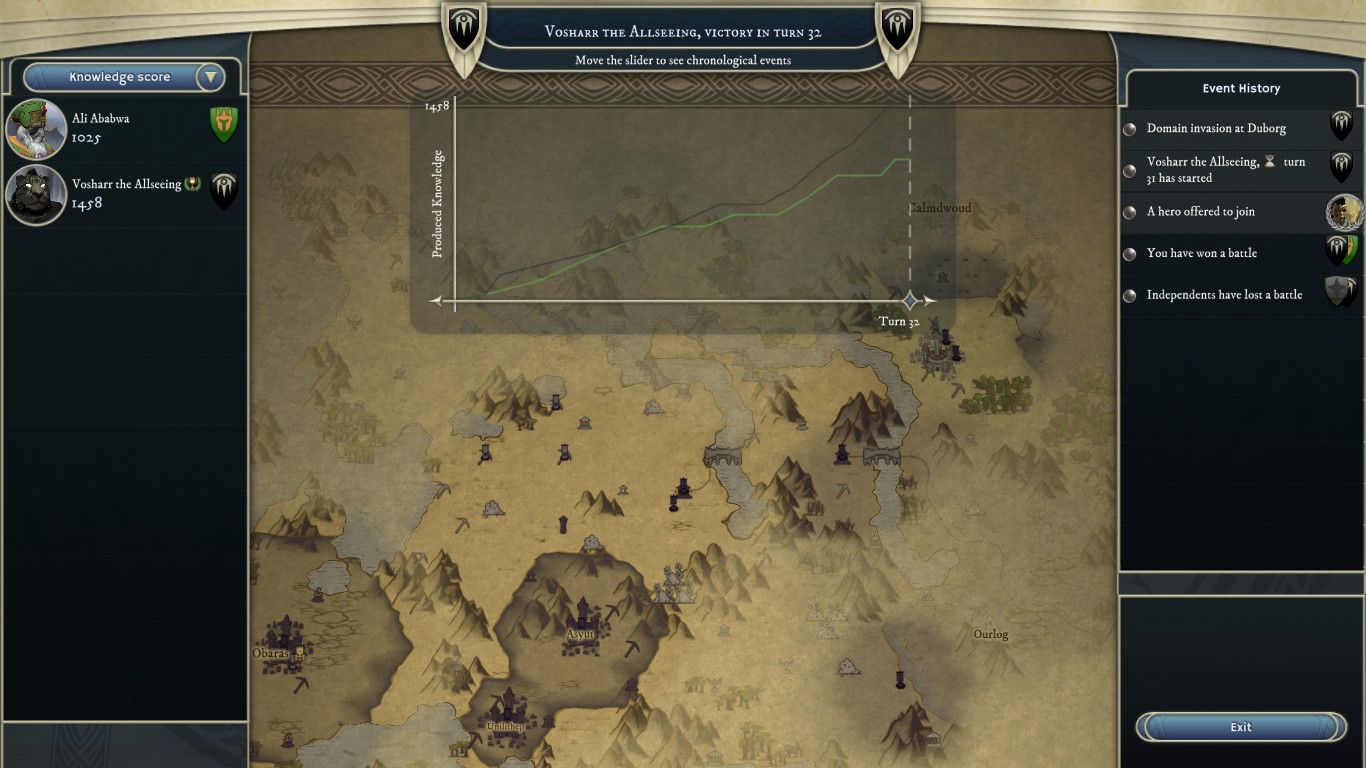 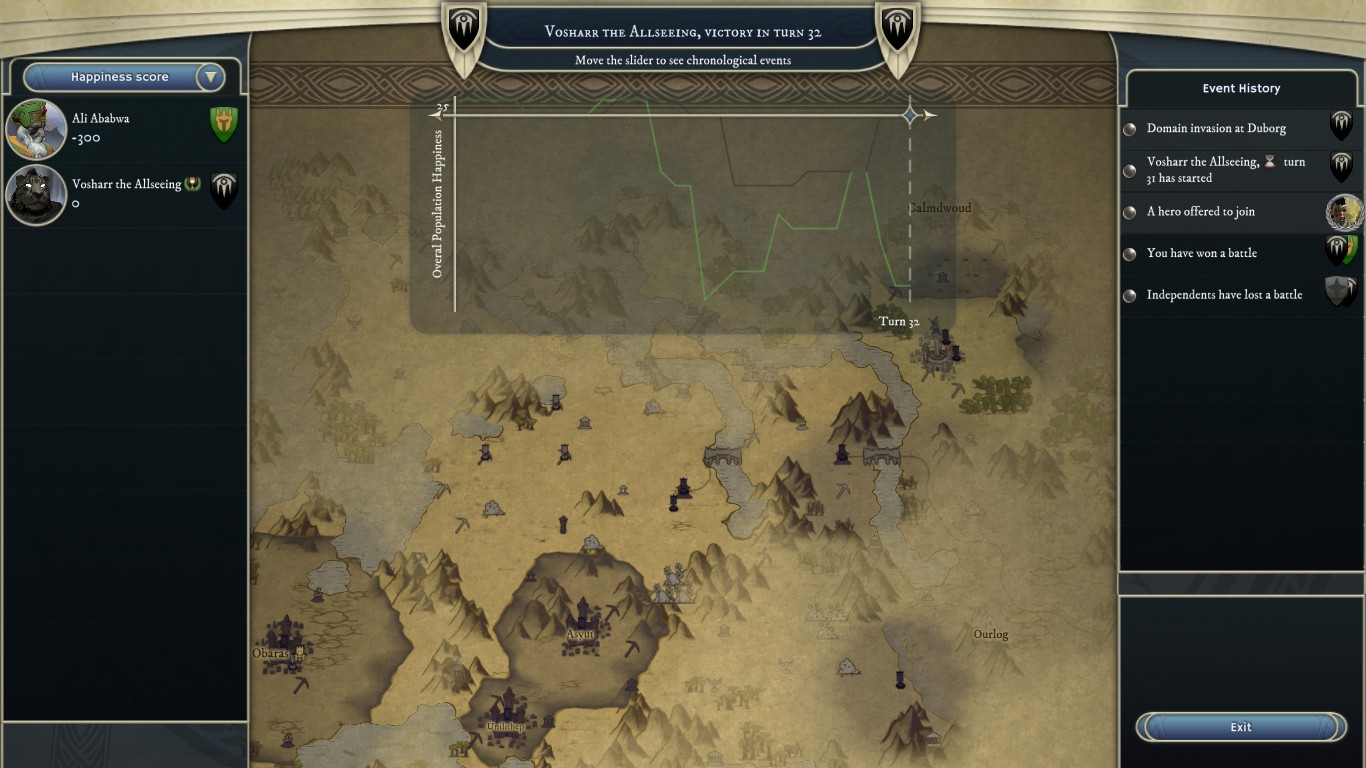 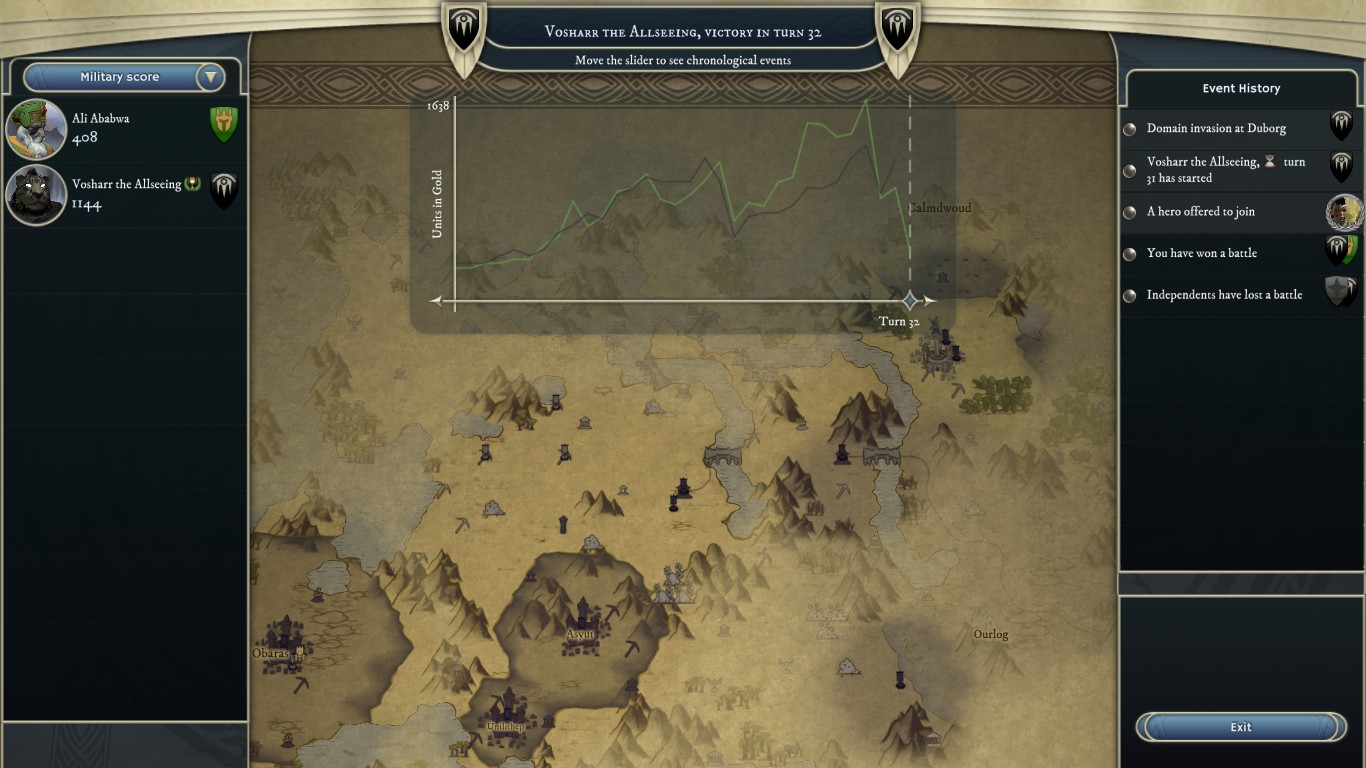 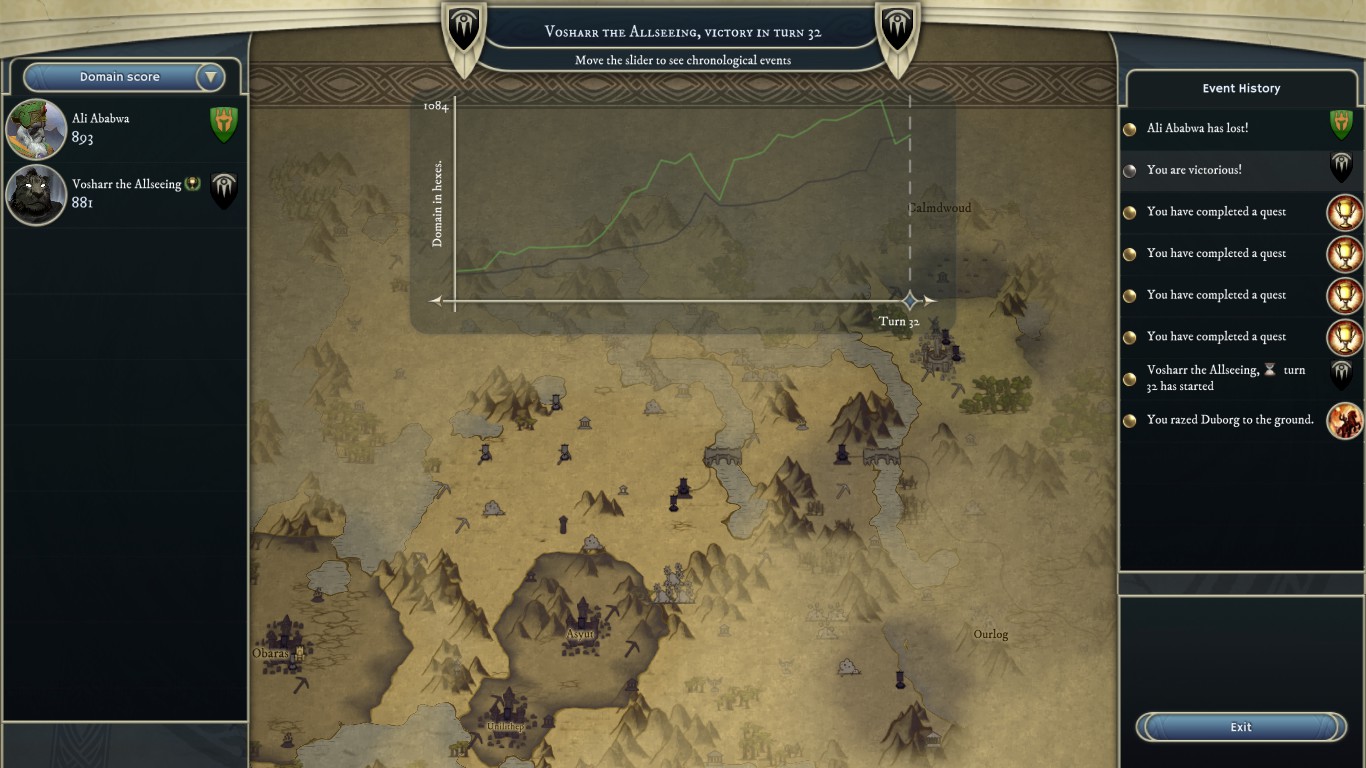