I never said anything about me vs novo.

You failed to qualify for the final (or at least stay in the winner bracket like keika), so you'll have to wait novo. I already explained that.

At least, we'll see me vs keika.

But I don't think I deserve my current #2. Neither do I think that novo deserves his #3.

But based on your results keika, I do think you are top 8. Winning based on opponents' mistakes is the main way to win.

To be honest strange to hear that. There are a lot of good players vs which we didn't play or played just a few games.
One game doesn't tell much, there are still a lot of random factors.
I can't agree with you that at least I am on top X at this moment. I have a lot of games (and this game as well) which I won just because of opponent's mistake.

And come on, Hili. Just play vs Novo.
He can play very good with many classes. If you don't want to play vs Dwarf Theo, I am sure he can play Archdruid vs you

I'm always ready to play with you Hili, but it's you who do not play.

Well, I have to disagree with you regarding novo. If we remove the Dwarf Theo games, he hasn't beaten any good player except mahimka and a few times vs keika. ^^

Congratulations, Keika! A very impressive win. Please, continue writing these reports, it's a very nice reading for me, more interesting than morning newspapers =)

To be honest, I would place Novograd and Keika on top 1-2 positions at the moment. They show great performance in every game.

No offence, Hili, but you still need to prove that you can beat these guys =)

I tried myself but failed. Gonna try again soon I believe (hope to beat Novo in my team game first...)

Nice, well done keika. I hope I put an end to your victories in round 7, otherwise you'll end up #1 in the ranking.

This game was also played on medium map.

Early game I leveled up my leader and necro hero quite fast and got two ghouling strikes.
Produced few reanimators and started raising mass cadavers and with inflict despair and curse started converting units.
I focused on leveling first hero and wanted to try a bit different skills set than usual.

On turn 13 I took dungeon with double marks of death and was able to convert warbreed.
Then I splitted my army. One stack leading by first hero was exploring left part of the map and again with mark of death took ziggurat and lost city.
Other army was cleaning halls of forefathers on the other part of the map.

On turn 16 I found Novograd and he already had veteran mature serpent and also gold and silver baby shock seprents which was not good for me. 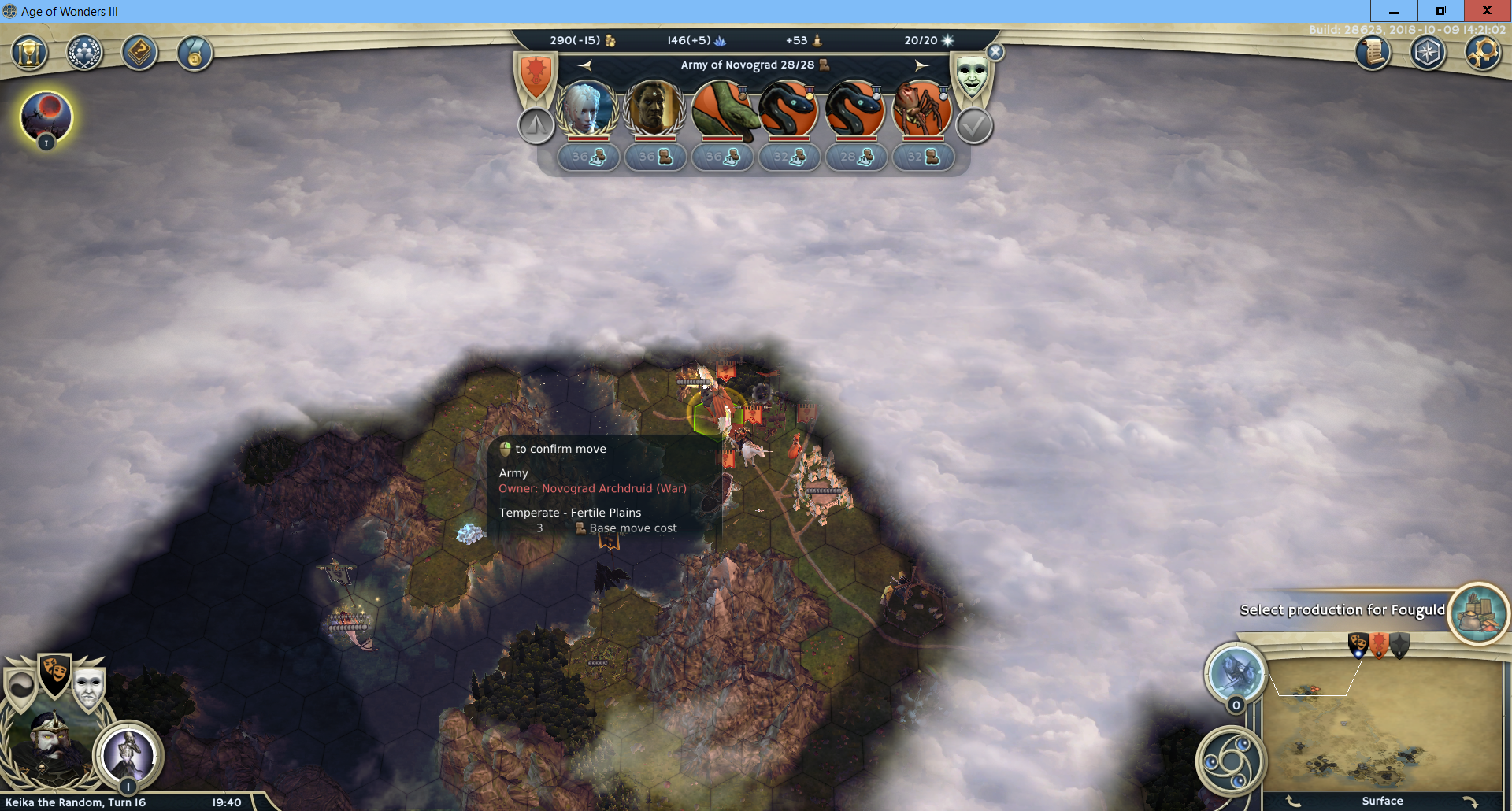 After I cleaned everything nearby, I planned to join my army and conquer archon dwelling between us, but Novograd did it first.
I already had negative gold income for long time and time was working against me, so I decided to try to raze his cities, raze my own throne and potentially cast animate ruins on his cities.

My scouts found out that he already has 4 elite or champion king serpents (2 reed and 2 shock) and also stack of converted units leading by theocrat hero.

I thought that he probably will try to defend his cities and at the same time will send some units to capture my throne and so I started selling buildings and was ready to raze it.

I recaptured archon dwelling and placed three of my stacks to defend it, while my other army was near trying to take another ziggurat.

I didn't know that his leader's army close enough and his attack was a big surprise for me: 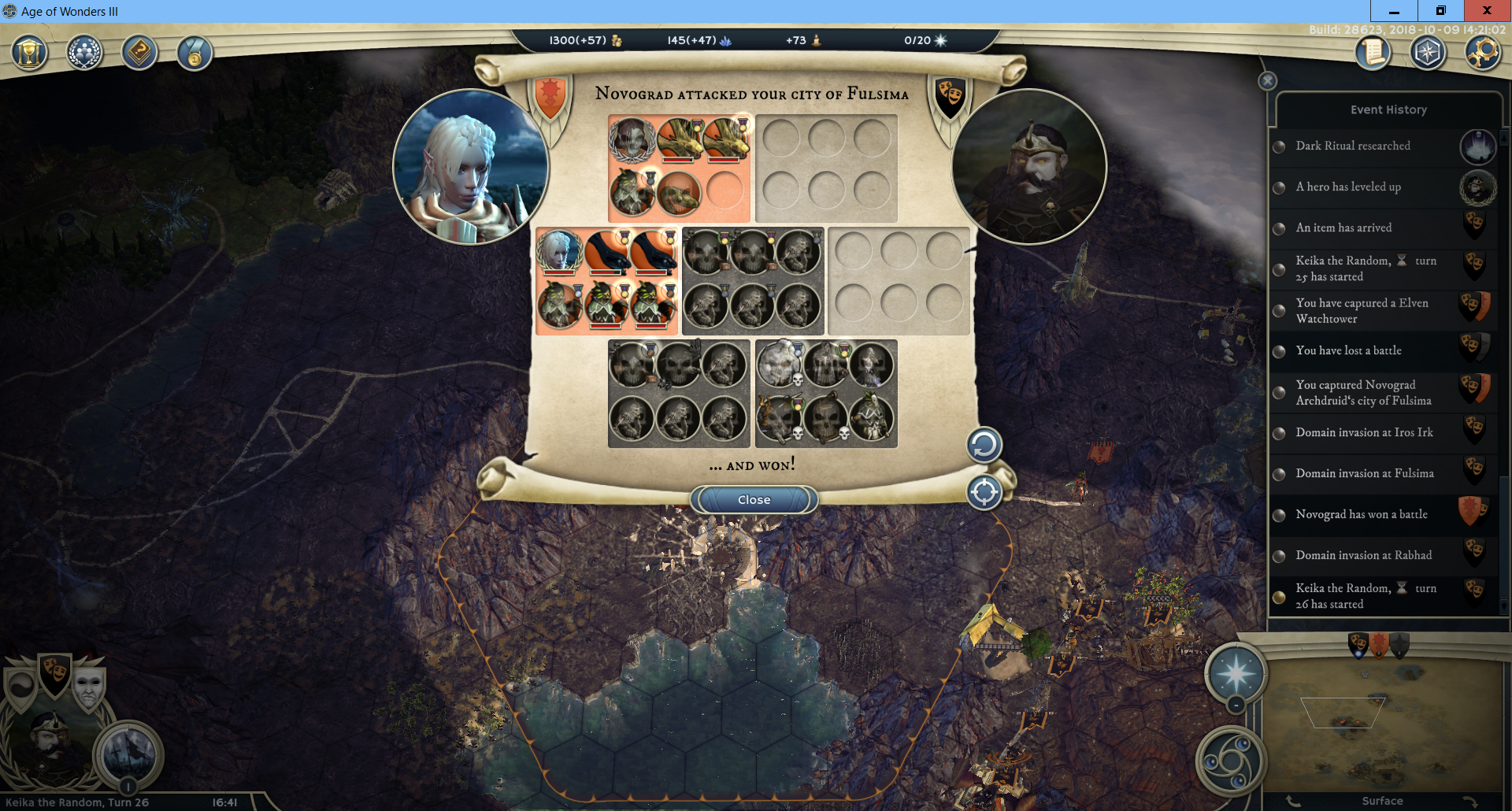 I lost that battle and killed only one important unit - his second archdruid hero while I lost some good units.
But my main army was nearby and I bought 4 more units from the inn and counterattacked him: 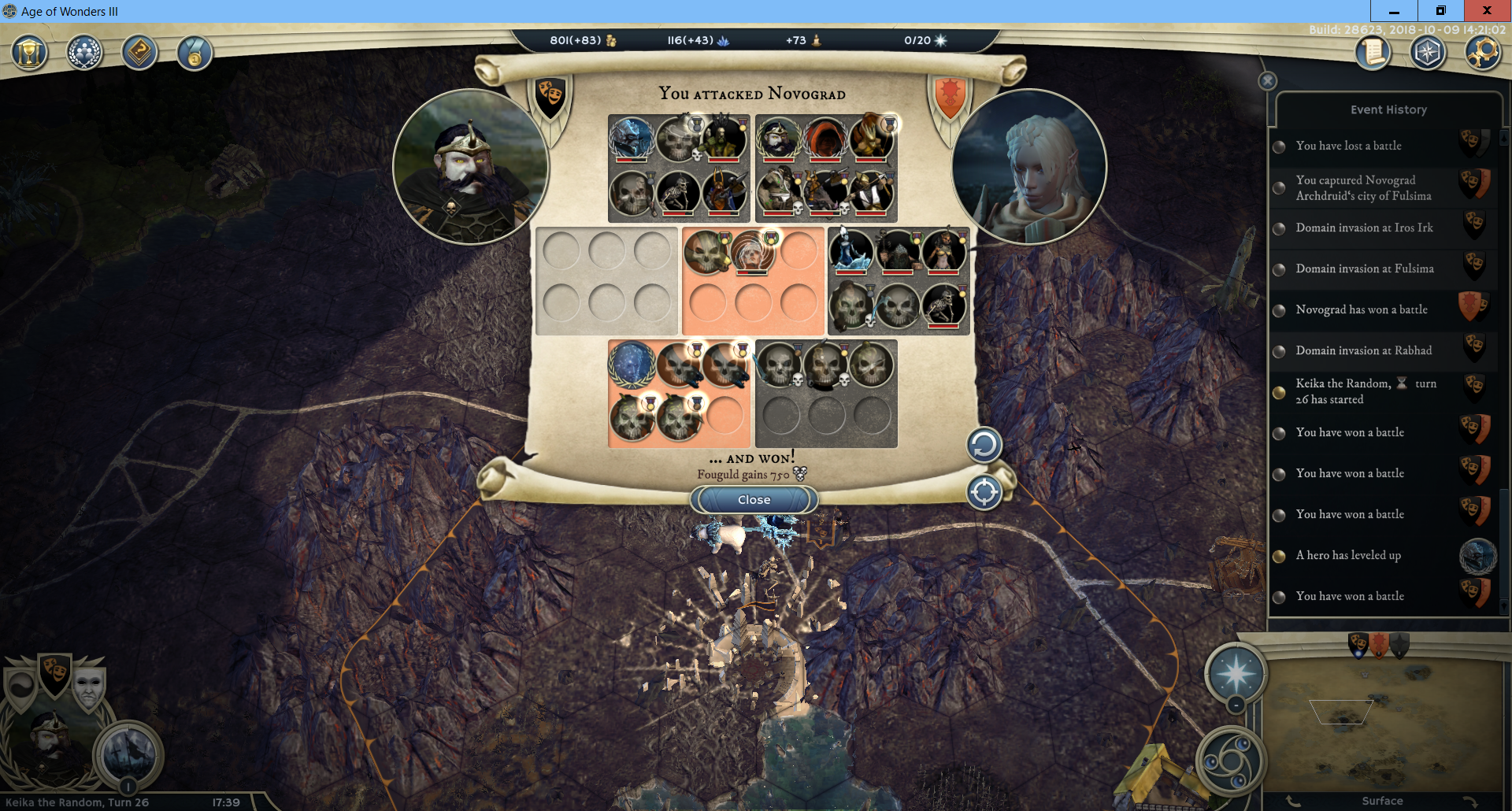 I think it was a mistake from Novograd's side, he was too confident to blindly attack me, but even with this major win, I still was in trouble.

His cities were far enough and he could build more hunters and either defend throne behind walls with mass hunters or just plunder his cities, run away and turn the game into attrition war with higher chances to win.

Anyway I had no choice and I went toward to his cities and razed my own throne.
I have captured few forts, took his vassal and with lost soul prevented his two cities from plundering by recapturing them for one turn.
After the game Novograd told me that his 3 hunters deserted him chasing that lost soul on blight terrain because of very bad morale

I splitted my army and with faster units I have captured his undefended throne and secondary city, while the rest of the army was holding his former vassal city waiting for plundering finished.

And in the very last turn he attacked them and lost the battle: 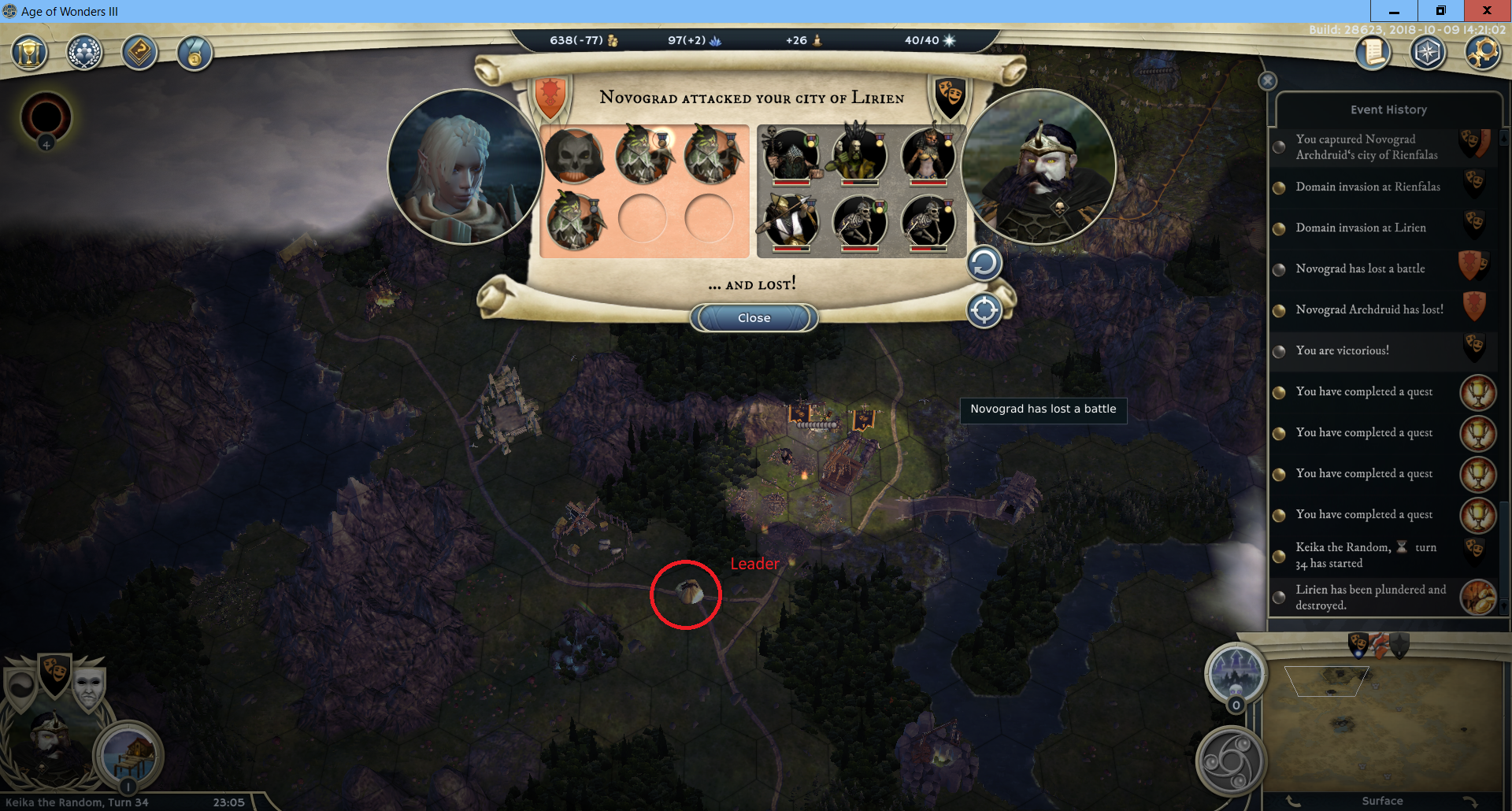 For some reason he placed his leader in three hexes from my units on ground and after losing that battle he surrendered considering that he will lose his leader next turn.

The funniest thing that we could continue playing the game, because on my turn city has been razed and also "dark sun" cosmic event was triggered, so I had only 1 vision range and didn't see his leader.