Before starting game, I was thinking to play depending on map, but considering early rush option as well as hit & run with scorched earth. Was lucky to get AD first hero in second try, because it synergizes well with that strats.

Tried to scout opponent early to decide what strategy it is better to play and found out that we both on surface (which was good for me) and also that he is playing archdruid elf. I expected to see a lot of swimming/flying units, especially hunters and started thinking about units to counter them.
My wisp has been killed and I discovered that Phiro was lucky to get shock serpent evolved to mature.
I decided to build draconian flyers and summon phantasms.

I think my early game was quite successful. One of my hatchling evolved to draconian flyer and I got another one from quest. Turn 10 I cleared dungeon and got more army and started summoning phantasms.
I had a lot of battles and tried to micro manage experience gaining as far as I can and was very successful. At the end of turn 13 I got both leader and hero level 13 (never had it before so early), two champion draconian flyers and gold medaled phantasm. One more stack of units leading by rogue hero was exploring another part of the map.

I had 8 vision range on draconian flyers because of shrine and decided to move closer to opponent and scout his cities.
Few turns later, I found a lot of built roads, cleared lost city and was able to see main phiro's stack.
I was very greedy and decided to steal nearby ziggurat, but battle went bad - guards attacked me on first turn, I was not able to prepare and got my leader heavely wounded by double breath, so it could not help in battle until the end. As a result I lost my champion draconian flyer and it was very heavy loss.
Nevertheless I decided to push forward, bought 3 units from phiro's inn and went to his throne by water.

I think I revealed my plan when I stole ziggurat and also cleared few sites nearby, so Phiro read it very accurate and was prepared. He ambushed units bought from the inn and also killed gold medaled phantasm, so it was a waste. What was good is he showed me his entire army and I was surprized to see 3 full stacks all near throne.
Anyway I was able to capture throne and casted scorched earth. At this point he still had only 20 casting points, so I had very good chances to raze throne. In theory I could take throne one turn earlier and he could not disjunct it in two turns, but I didn't want to do this blindfolded.

I had only 4 units in my stack after I captured throne and I had to evacuate them asap. I went toward to his last city to cast scorched earth and raze it as also.

I expected that he has negative income and also short on mana with almost zero income. I wanted to raze his city and force him to disband king seprent and some units, while I clear map and build counter units.
I noticed on the map that he splitted his army and with my secondary army I was trying to clean some sites before he reach them.
At the same time I was producing draconian flyers (as counter to his hunters) in 1-2 turn and already had 4 of them scattered on the map.
Last turn he moved his army to defend his city and I give me opportunity to kill his leader.

It was risky move, but it was good opportunity to finish game without playing hide and seek vs his swimming units for long time.

I attacked his stronger army 6 vs 9 with the only purpose to kill his leader and finish the game. I had thunderstorm, call lighting, double stun abilities on my leader, regrowth on my hero and also units which could flank and kill his leader.

My plan was that AI will move his leader forward and expose him to be killed. I expected that my leader casts thunderstorm on first turn and also hero casts "Revive Instinct" spell, so it would help to delay his 3 mount units from the back. I decided that his units will ignore my wisps and phantasm because of shock and physical resistance and most likely will ignore draconian flyer in guard mode because of high stats and projectile resistance.
I expected that his units will focus fire on my hero and leader and I have couple of turns for my wisps to teleport and flank his leader and finish him by draconian flyer.

First 1.5 turns went as planned - thunderstorm, revive instinct from my side, focus fire on my leader from his side.
He casted slayer's doubt on my draconian flyer and it could ruin my plan, also my leader was stunned by storm sister, but his leader tried to disjunct thunderstorm and got critical failure. On my second turn my hero stupidly casted root spears on hunter while I expected him to call lighting, but it was not really matter because my draconian flyer one shot killed his wounded and stunned leader. 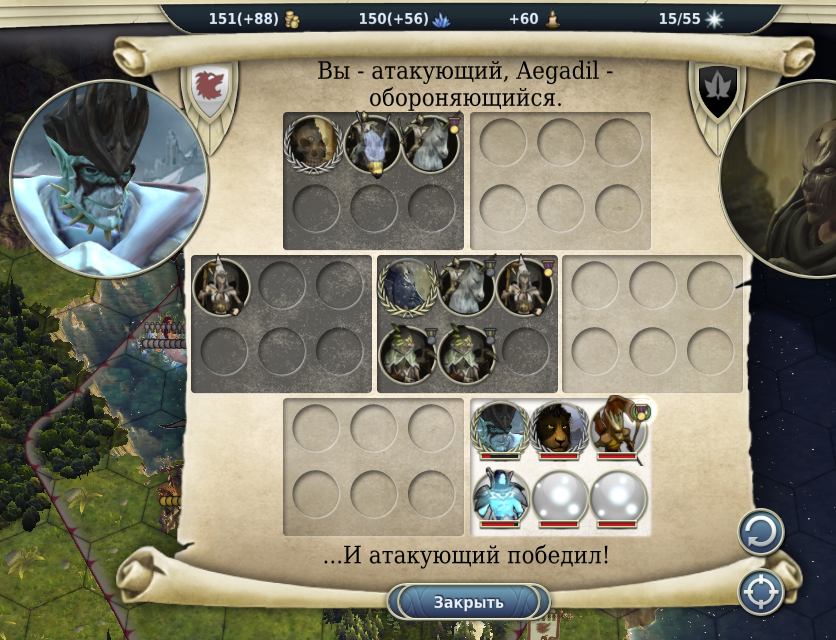 I think even without critical failure on disjunction, I would kill his leader in next two turns. I was expecting that at least one wisp teleport and flank his leader and also get flank hit from my draconian flyer, and also 1-2 hunters killed. His other units still was behind and I had time to finish him.

i have gained a king shock serpent in turn 13, built 7 hunters, 1 turn production, leveled up to two Storm Sisters, got units from a Dungeon, got units from quests... I had a good start in terms of fighting power and leveling up. (I did not convert or befriend a single unit)


But hardly any scouting because there was not enough mana available. I knew Keika would rush and besiege from the water with Scorched Earth since the moment where I saw that he plays Sorcerer. I was checking the map meticulously and expected him to come from the water. He was close to my base in turn 15, clearing a Ziggurat, but i never saw his main stack. I had correct approximate guesses where he was, but that was all. I only knew that he is heading for my throne now and that he could he see which structures I had cleared. Of course he was earlier than me near my throne city, moving on the water. (Although I had built roads, just for this case.) I destroyed some scattered units from him, including a gold medal warrior, using a berry tree. But the throne was exposed for 1 turn. Keika saved his casting points probably, so that he could cast Scorched Earth and in the same turn inscrease the spell defense: 17% chance of success. And I even would need to wait one turn. And the mana income dropped and the gold income was negative the of course. It was useless to wait. I wouldnt have hardly had enough mana for a second try. So my throne was gone, and it was likely that my leader was going to be taken out in combat afterwards even though i still had the stronger army after i had splitted my forces. Summary of the factors: Scorched Earth, failed Disjunction. (apart from: no mana, no Zephyr Bird in spell book, hardly any scouting possible)
Published on Sun, 05 Apr 2020 21:42:53 +0200

yes, it was still possible that my leader would fall before all the units joined the combat, but with a failed "Disjunct", it was unavoidable.

If my leader did not fall in this battle at all, I would have won the battle. And yes, I had to send 1 hero with 5 hunters and a gold medal king shock serpent away, because  I need an army for clearing structures and harvesting enough many to pay a settler to rebuild my throne

My apologies Phiro. It was absolutely undeserved win.
This is just insane 5% unluck in the very important battle. Sorry about that.

Well, yes, I tried to abuse AI. I predicted few AI decisions, but in some others AI actions I was wrong.
Your army was splitted in the battlefield as I planned and I think I still got decent chances to kill your leader because of AI stupidity (even without luck) and it was on purpose to attack your outnumbered army.
Can't say that it was good decision, but you partly incited me to do this by losing your throne and exposing leader.

I can imagine how angry you because of this unluck, so again, please apologize me.
I played too risky this turn and I should not do this in such games. Next time I will be punished for that.
I should just capture another your city, cast scorched earth and flee.

I can't say that I would lose if I lose this battle. Yes, losing 13 lvl hero would be very painful to me, but still manageable. I had good economy, as well as army, but I guess your chances after this would be increased much.

Ok, you're good to go! keika, next time please remember to take the screenshots in windowed mode so that we can see the timestamps.

im in. we can start.

Sorry for delay. Class/race is sent. Game is hosted. 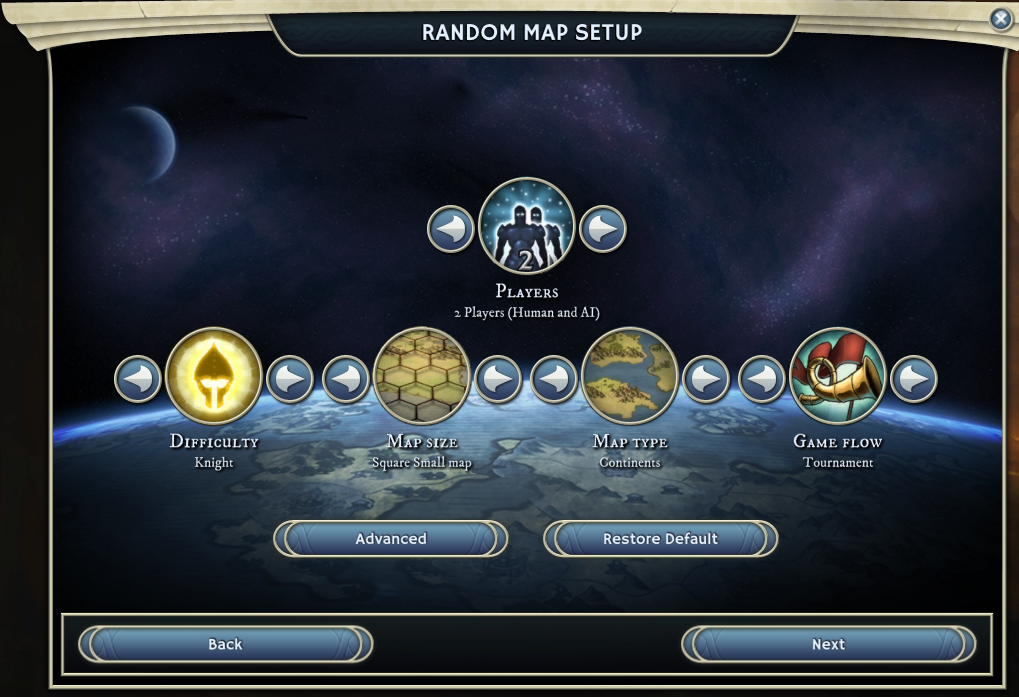 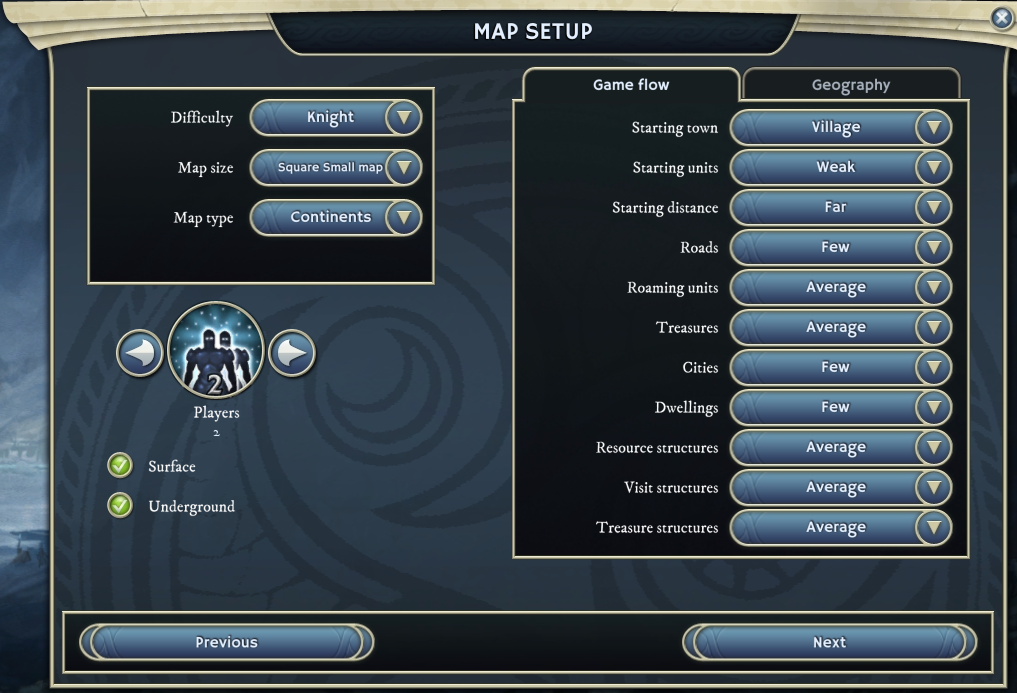 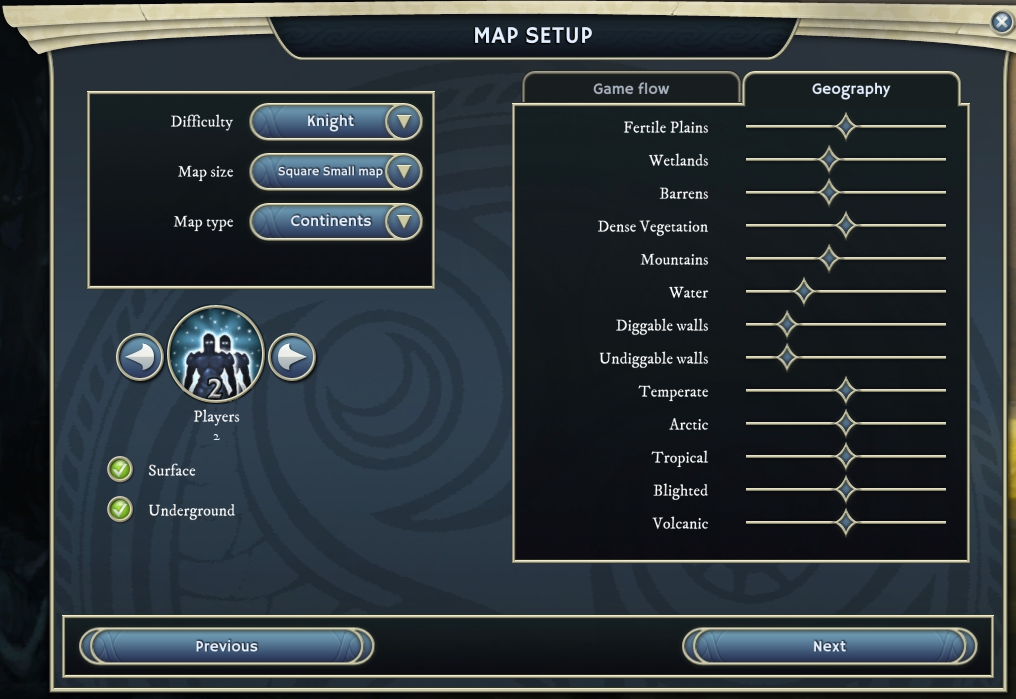 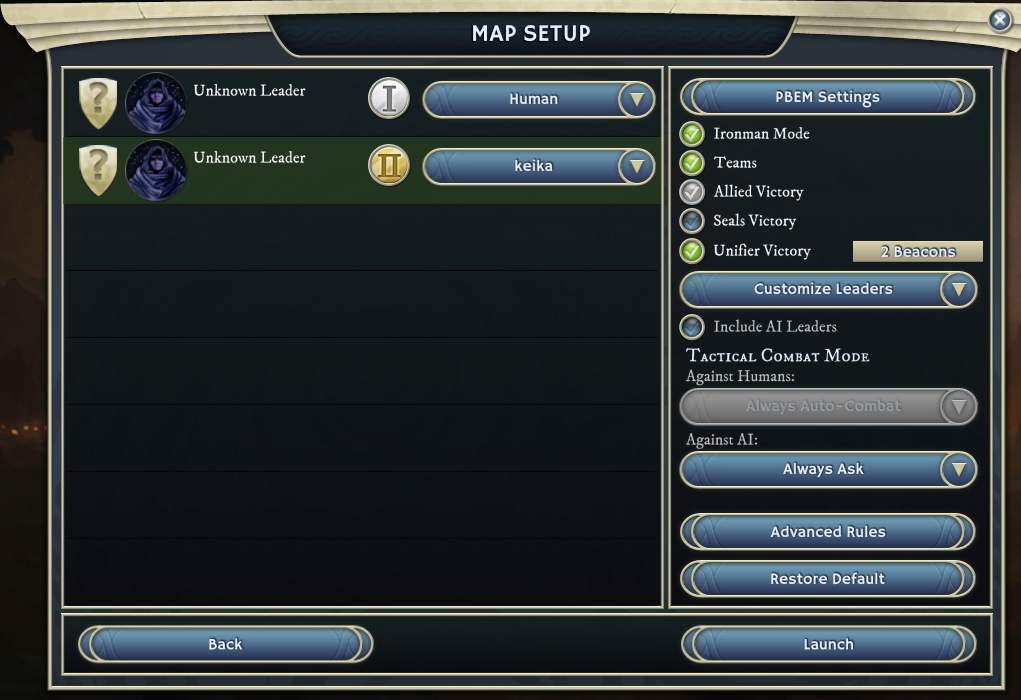 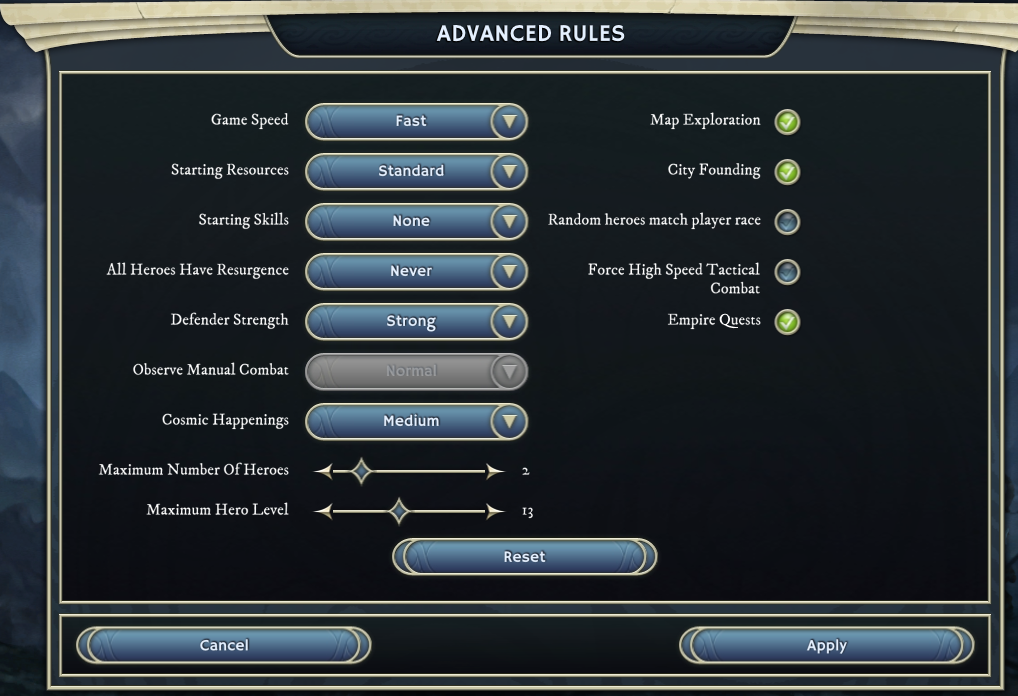 Hi! keika, you're hosting. Please remember to use the Tournament Edition (for this round only): https://steamcommunity.com/sharedfiles/filedetails/?id=1585391987

We have phirpo's class/race. His class/race from previous round does count even if he didn't play the match.

Hello, everyone. When this match can be started? Thank you for reply