Nice reports and good to read about the game from both sides. From my point of view I would agree with Novo that Keika could have won the game with a hit and run tactic and just waiting tht Novo run out of gold. With the happiness malus and the income from the dwellings it sould like Keika would be able to supply a bigger army. Anyways, I hope is was fun for you guys.
Published on Fri, 22 May 2020 01:13:32 +0200

About my side my turn during 10~12 was very good and this made my  map very good till turn 20.

I had socerror with ice glove and there were some luck at stunning so could farm a lot ex without haste berry even.

After that there was 2rich king castle, 2wizard tower,1sanctum, 1dungeon quite close and I could took all till early turn 20's.


And about this part, I should say he had untakeable treasure sites because he was delayed in leveling and the most importantly he spent his main stack to harass me. Still druid suffer with rich king castle but other mystic and regend not that hard with evloved animal and champion hunters.


With gold from those tasty sites, I rushed 5-6 evengelist for every turn, so my situation was really good and it's not that common for theo even.

And near that time keika bought dragon dwell at just my front yard. it was 1day distance from my city and 5~6 day from my throne. This map was very good for keika also indeed still he couldn't noticed it. He had dragon dwell so close and no ground way  to his zone and quite a lot water tile to cross so even can't cross at 1turn. More over there were 3dragon dwell totall and it's definitly not normal. dragon dwell with 1scout to force auto can't be taken even with resurgence main stack and it gives a lot enonomy per turn. need nearly 2stacks and it cost a lot of opportunity cost for me so I even couldn't touch that dragon dwell.


So it was obvious for me if I let his dwells while paying upkeep to protect my cities(and it was obvious I can hold only 2cities include throne because of scorch earth and hasty plunder), I can't win in long run so I decided pay back by rush. And this was totally unpleasant and unnormal for me.


you can see how it goes from keika's post and I will tell only  left.

just after his main stack reach to me, I couldn't produce any units because of upkeep and while rushing I can't fight enough.

And my evengelists forced to stay near throne so no move convert possble there.

maybe I was bloody unlucky with unit sets near because I had 0 floating or flyer from convert.

Anyway you can see even with that huge army how much I lost with his hit and run.

Even after his critical mistake of leader, he still had chance to win if he ran away.

He could force me to rush more or hold dragon dwell to complet plundering just by moving his mobile stacks on water near that dwell.

1turn lose of dwell isn't matter for him but serious matter for me cause of distruction.

If I take his city, he could cancle plundering of dwell and can plunder it

If I hold dwell, he get more 4turns and it gives a lot more to him while I spend much more upkeep.

no matter I decide what, he could plunder his throne and near by city so it gives huge gold and mana to him.


After this stage,keika would have more than 1k gold with little minus income due to his dwells.

For my side, I would have gold from dragon dwell plundering but it would spend on upkeep so I need to take sites for sure.


keika thought in this situation I'm better but I don't think. my walking units can't return to my zone before his mobile stack. I had 1floating stack but they can't win vs 2.5 stacks of him.

And while moiving even he can get his upkeep from clearing thing on path.(there was uncleared zone below my sanctum.)

And after that army reach at me, as he said I can force him some army lose but still can't take my city.

without cities for both player, keika has less units much lower upkeep and some income from dwell, and hugh gold and mana in treasure. For my side, I would have 3stacks and can add more from convert.


In this situation, I must divide my army to pay upkeep. however if I place only 1stack even the strongest, can't win vs his all army except his leader,if he hire some from inn. And cause I don't have throne, it's mean my lose of game no matter how much would left.

only way to solve this problem is being far from his army in underground near lava. And in this case he also can farm some sites.

my army would be more and more while his army not grow except some animal but it's not matter if both has nothing to defend. And both of players single mistake with leader stack, it's lose of game.

Also he said about scouting but I can't win it vs his wyverns and more swiming stack. I can cast cherub for scout but if I have less mobile army it means dead of it and I had so little mana and can't afford that consumption.

For this game if he picked hero instead random and just with partisan+no mistake for his leader, he had more chance to win for sure.

Overall I have bought more than 2 stacks from inns, asked for army tribute from dwellings several times and from some point started producing army non-stop from three cities, but still it was not enough to catch up Novograd's army.

->first of all I should say about this.

Even in normal situation, if druid can have same amount of army with theo it's unbalanced sure because druid has much lower upkeep with more mobility. And even in this game, as he said he spent so much gold at vassal and mercenary even without partisan spec. So it's 100% greed

We were playing this game on medium map as non-ranking, but it was good and quite competitive, so I decided to report it.

Started as AD and picked rogue hero. Cleaned everything except 1-2 sites near my resp in 10 turns and discovered than I am on peninsula with the only one ground way.
My neighbour was on island, gave only one shitty quest and after that I just adsorbed it.

I was not lucky to summon any serpents (among first 10 attempts I believe) and there were nothing to befriend close to me, so I evolved only one spider in whole game.

Produced a few hunters and with my leader and 2 wyverns swim to explore new territory closer to opponent.
At the same time with rest of the ground army I was uselessly walking back and forth cleaning rest of the sites which I able to take.
Adjacent zone was not good for me, because it mainly contained mystical sites which was impossible to take with my army without a risk to lose everything.

I had good economy and with my small army had a lot of gold. Having "slightly good" alingment (and then "good") vassalized 2 dragon dwellings, giant dwelling, orc's outpost and conqured archons and released as vassal.

With my leader's stack I sneaked closer to Novograd's cities and started harassing him. With the help of units bought from nearby inns, I have captured and razed one city, razed 3 forts and approached to the throne.

At the same time I was scouting Novograd's main army and found out that he stopped cleaning sites and went to my cities.
He has captured archon dwelling and swimmed to dragon dwelling with clear intention to capture my cities.

I could not compete with his army, he had more than 3 stacks of good units (many of them converted) and also was summoning spirit elementals.

His heroes was far ahead in levels and items, afair 13 lvl leader, 13 level sorcerer and 11 level theocrat and so 2 stacks with divine justicars.

Even when I quite successfully made a diversion because of Novograd's incaution and killed 3 evangelists (including 2 champions), champion boar rider and troll, losing only one mature serpent (luckily charmed few turns ago), his army still was superior.

The same was near his throne. He had a lot of converted units including couple of shock troopers, assassins, ogre, champion warbreed and some other units.

The game was heating up and then I made fatal mistake. Trying to scout with my leader I moved it one tile further and was not able to retreat to safe position and Novograd punished me for that mistake. I lost my entire stack by embarked army. 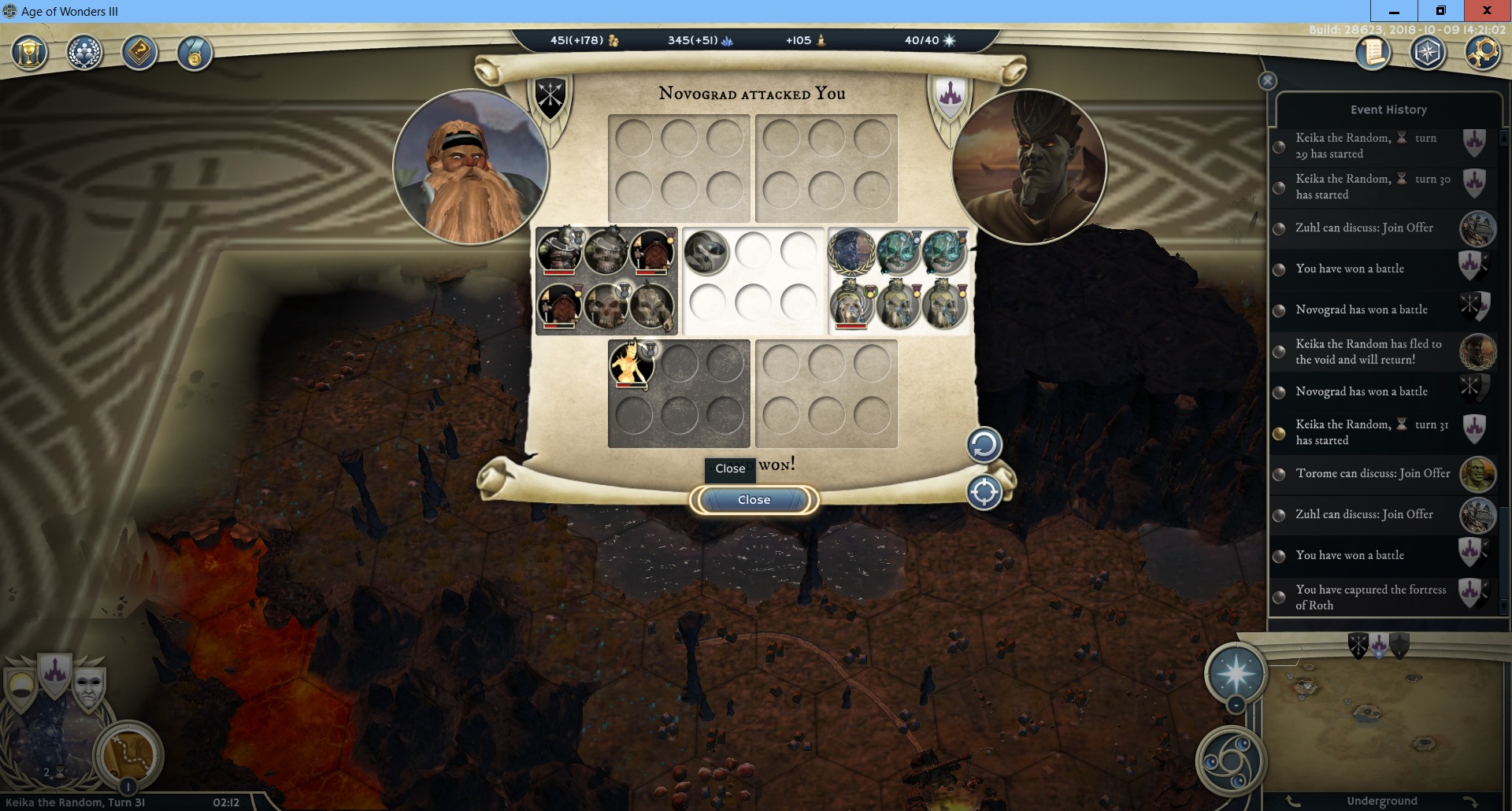 That loss completely ruined my plans and I think it cost me a game.
Next turn I have captured secondary city with some summons and units previously bought from the inns. 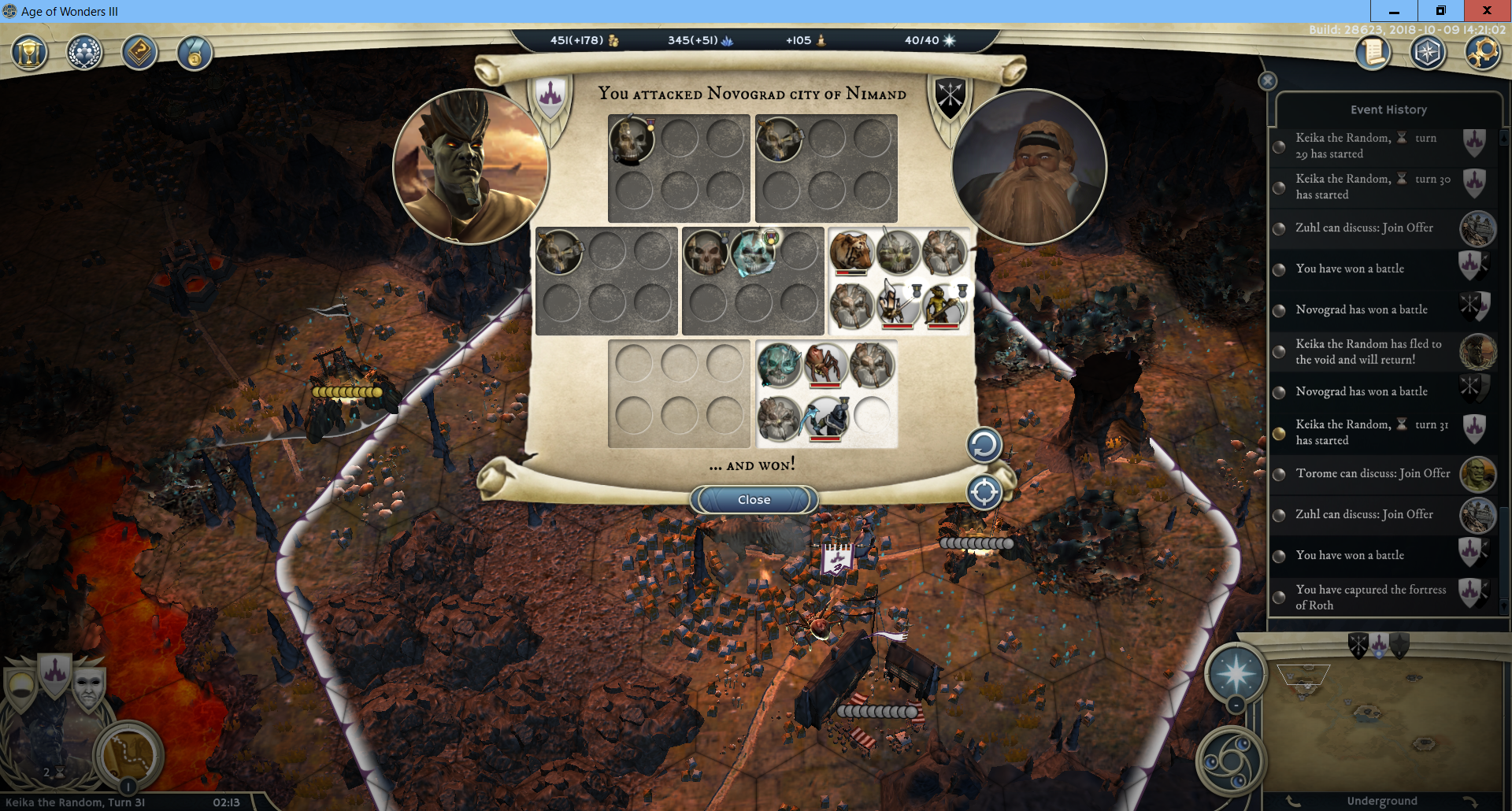 Unfortunately this win didn't matter anymore, because I could not cast scorched earth without leader.

I made serious economic damage to Novograd, conqured his orc's vassal one turn earlier and razed one more fort with +30 mana.
He was short on mana, negative mana income and most likely negative gold income. All of this could turn the game over on my side, but without leader's stack I thought that I will lose.

So I decided to give the last fight and attacked his main army. Obviously I had very low chances to win that battle: 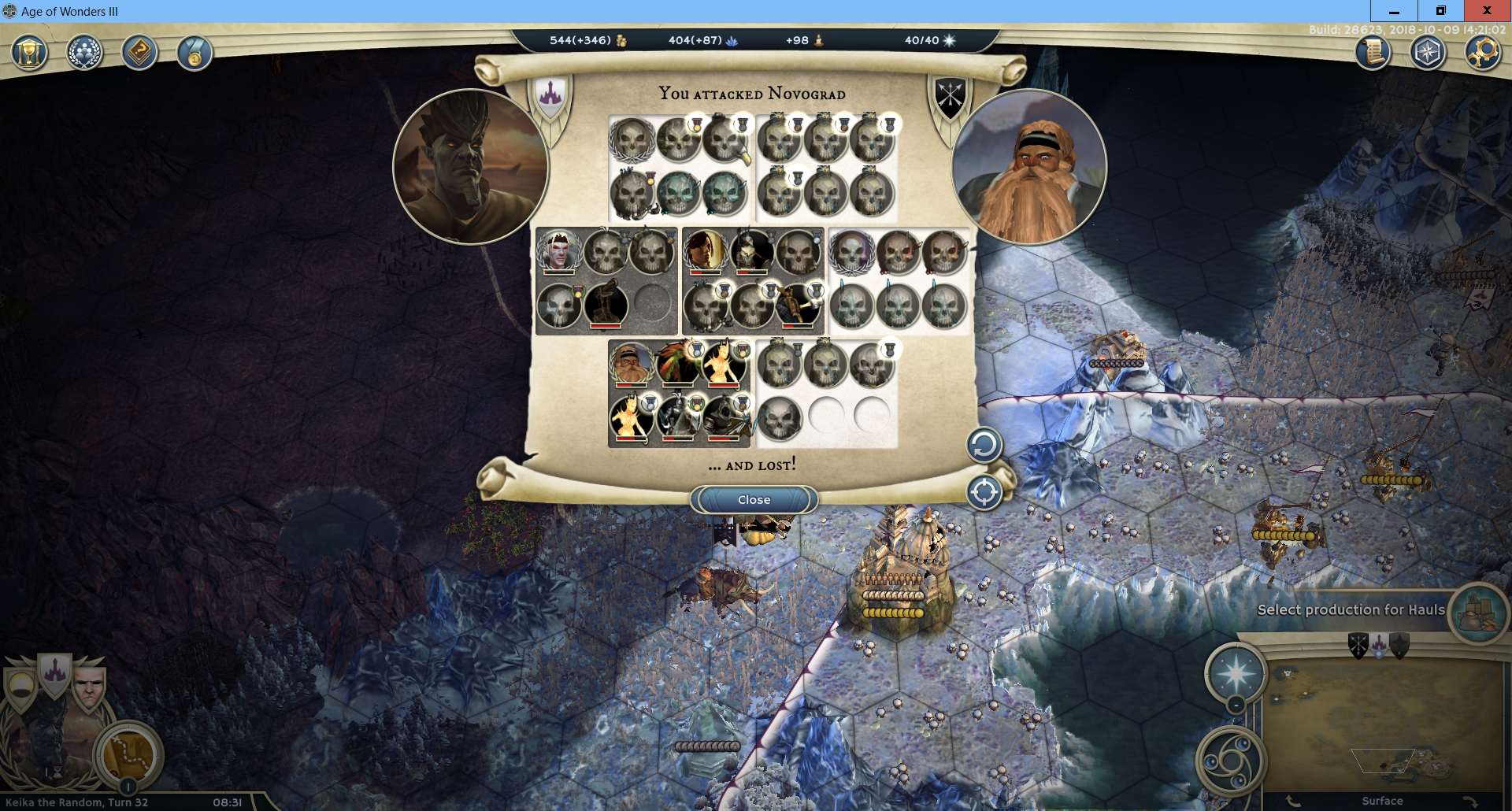 This is the result after resurgence. At the end of the battle there were alive leader, 2 spirit elementals, warbreed and nearly dead hero and serpent. Not so bad considering the quality of my army.

Overall I have bought more than 2 stacks from inns, asked for army tribute from dwellings several times and from some point started producing army non-stop from three cities, but still it was not enough to catch up Novograd's army.
In total I have razed 5 forts, 1 city and captured 1 vassal, but he still had gold to maintain his army.

We were discussing after the game with Novograd and he thinks that I surrendered too early and instead of attacking I should plunder my cities and run away.
Maybe I still had chances to win, but I had dismoral after I lost my leader and didn't believe in my win anymore.