It was very short game ended on turn 15.

Scouted Novograd early, we both were on surface and not so much far from each other.
I didn't plan to rush early, but site's locations and map in general encouraged this.
Bought peace with my nearest independent, but he gave me a quest very far from city and behind mountains or even on island.
At the same time I found that Novograd had very developed city-size independent with stone walls and a lot of useful sites in domain.
I have cancelled his quest razing watchtower myself by crows (there were no guards which is pretty stupid).

I was trying to find opponent's army looking at sites he cleared, but my guess was not really correct.
I thought he went to opposite direction from his independent and probably went underground. It was only partly true, but after he cleared several sites, he turned back. Perhaps I missed him because of arctic concealment from the shrine.

Anyway I decided to capture his independent and raze it or join it and sit there behind walls.
Approaching the city, I discovered that Novograd's army is also close to it.
I decided to stick the same plan and prepared to sieging city. He could took it, but it had quite strong and dangerous defenders, so I thought his army would be seriously wounded after that and I could try to kill it.
Anyway it didn't happen. Next turn I got quest from this city I wanted to attack, completed it and get eagle rider as a reward.
Then I bought 3 units from nearby inn, captured city I just made a peace and sit there. I had almost 3 stacks behind walls, many of them were ranged and I had very high chances to win even my army was wounded.

Next turn his army didn't run far enough and I caught it with outnumbered forces and killed without serious losses. 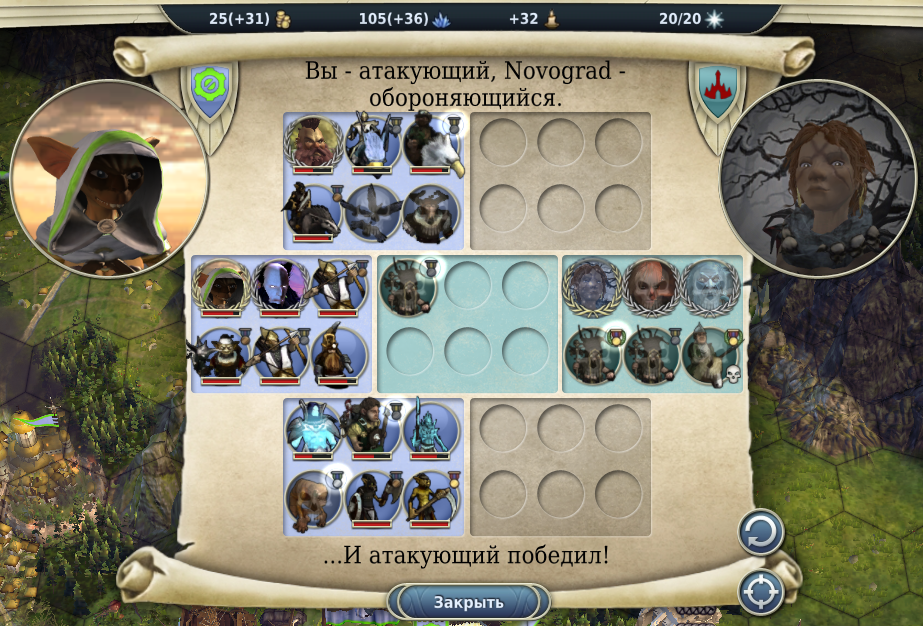 Can't say this win was because of early MC. I have converted only 3 units in this game - gryphon rider, phantasm and draconian scoundrel and I think they didn't impact much on game result.