This was a very good game for me, at last I can finally say I'm somewhat proud of how I played haha...

It was an interesting start for me, my main was in some sort of peninsula with my second vassal/city separated by water, I started nervous because I couldn't see where to move, Marky's territory was very close to me and I couldn't find a way to expand... I started with 2 druids, my 2nd hero was a sorcerer. I sent both my druids far away from my main, to capture structures and level up, I started to build forts to increase my research and mana income, which was very poor during the whole game. Meanwhile, my secondary stack with my sorcerer went to do the vassal missions and eventually I sent it underground where I was able to take some structures, however I was always losing units on this secondary stack and was hard for me to make it stronger.

Thanks to Marky's good mana income he kept me at float for a few turns so I could keep summoning animals. Another interesting about this game is that it took us a long time to find our opponents, it wasn't probably until turn 20 that we saw we were fighting 2 dreadnoughts!!

At some point I was able to get nice gear for all my heroes and leader, and told Marky that we should start scouting and attacking, so I had a couple gryphons that I sent to scout, but we had this fog cosmic event that was making the attack really hard, because like I said, we didn't have very good scouting, so we were moving blind towards Blad and Refineus territory.

The dragon vassal was protected by 2 tier 4 dragons, so like Marky said, we decided to leave it alone and just moved towards their territory, I was very concern on doing this, because then Blad had free pass to my territory without anything to stop him all the way to my main, but then, the luckiest thing happened, and Blad showed his leader with a dragon stack, which I told Marky I had to attack, I also saw the rest of his army getting close, so I believe he was planning to bring all his units together, Marky was like 1 or 2 turns away from that spot, so our plan was to attack him, if it was an ambush, let Marky finish the job. But then Blad went back to his territory and we decided to move forward with the attack. 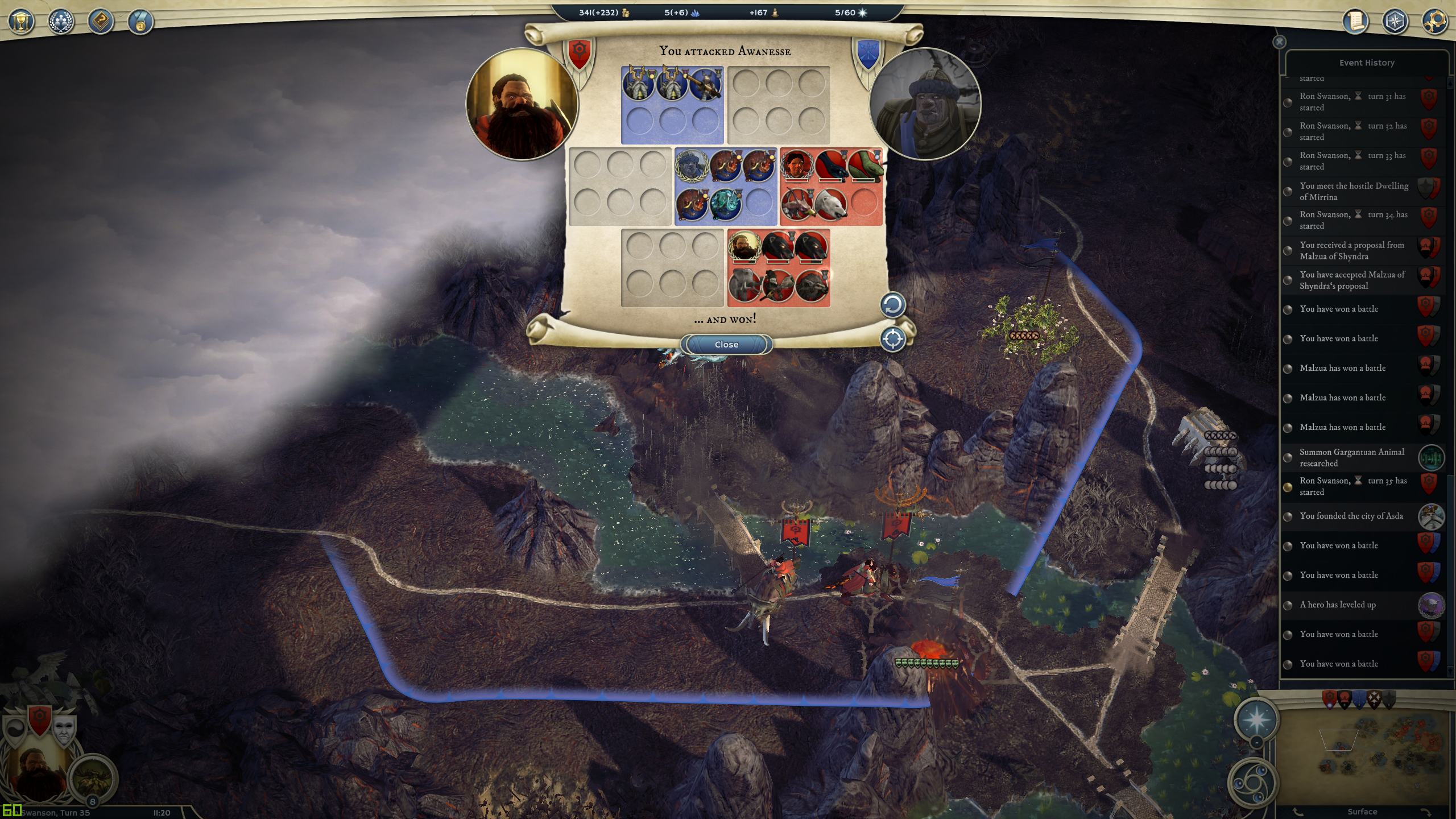 Then it was about that same time when I found refineus UG vassal, then I shit my pants, because I thought he was going to our territory from the UG and my secondary stack was not strong enough to capture his vassal, but it looks like he was more concern about finding a way to Marky's, which he stayed with a fairly strong stack protecting and capturing remaining structures in our territories.

This was a great teamwork with Marky, thanks Blad and Refineus! GG!

Dr.Light played very well in this game. He has develops hin amimals, with him on my side, i played a solid game (not great failures).
My land was weird, a vasall was below of a river, so i was not very fast in developing.

My Missions make me crazy, always very wide, sometimes i got missions from dr. lights dwarfs, but with a runemaster than reward, damn....
.so i checked up the naga, and with missions i got them.

I got some nagas and go to left side of the map, we have found a dragon, but it  was a vasall from another teams. We meet us near the dragons, and had luck because dr.light still alive with a good stack after some battles.

We decided not attacking the dragons (2 t4 units) in a autofight and go now to blad_ua cities....dr. light has raze one of them (or two?) and we meet us in his capital.
Won both battles, see screens before. Naga are very good in autofight. But my wizard was in void, but the battles was over and blad_ua was beaten. After it, refinus surrendered. I had a very good defense and stun abiliies. so i think attacking me maked no sense. Just to get a city razed maybe..but we are too strong now.

I had an ok game. Then when my economy was blooming and I had super city that would produce mechs with enchanted armory and flowrock citadel Dr. Light showed up with his army. I made mistake when I expouse my army that wasn`t consolidated and Dr. Light noticied it and took fight without any major casualties. I couldn`t defend my realm even with Refineus help and game was over. GG.
Published on Fri, 02 Oct 2020 19:32:06 +0200

To make this report fair

I believe initially we had a good start.

I died with my leader at turn 2 or something, but in general, I had a good starting location but struggling quite heavily with chocking fumes..

However, even tho I struggle with clearing sites, these wimps of Goblins die and just dies over and over. But my research was going well and my cities became strong. I even had so much gold that could give Blad enough gold for a dragon dwelling and at the same buy vassal after vassal city.

I made a slight mistake by exploring the cave further I should have returned with the leader to surface when I had built my fort underground. But got greedy and cleared some more sites underground. But distance got very far from my cave entrance. So its was either return for 7 turns of movements or continue. Then Dr light came and harass with his animals. So it was necessary to find an entrance in the middle. But no one where to be found. So I kept on looking. I realized I had a Theo hero hanging around a city so I was ahead of research. Blad died with his leader, unfortunately, he got caught in open with like 3 + 3 units and leader in the weak stack. Was some sort of Ninja strike force I have not seen before.

Then I had to buy some units, especially cannons as its one of Dr lights favourites. Mass produce and just secure Blads cities with units. It was not enough. Even one cannon almost died from a spider.

After awhile this freaking cosmic event with "Falling clouds" came with " all Machines and Armored units have -3 defence and 40 % shock weakness. Crippling exactly everything that I and Blad had in our current forces. So we could not repel the large forces coming. The vision reduction made it very hard to predict and as soon as Marky arrived with his armies it was almost decided.

The thing that could essentially become in my favour is if I could rush to Marky throne withing 3 turns as he actually died in the attack when Blad fell. But my south city of Marky's throne discovered a full stack of phantasm and a couple of other Draconians patrolling. Then my leader was 4 turns away making it very hard to reach his throne to make Marky lose.


I think are initial forces were little too uncoordinated to win, especially since my leader was underground all the time. Then two Dreadnought made it little less predictive to counter us. Perhaps if we both started underground we could have a better outcome, but we may never know. 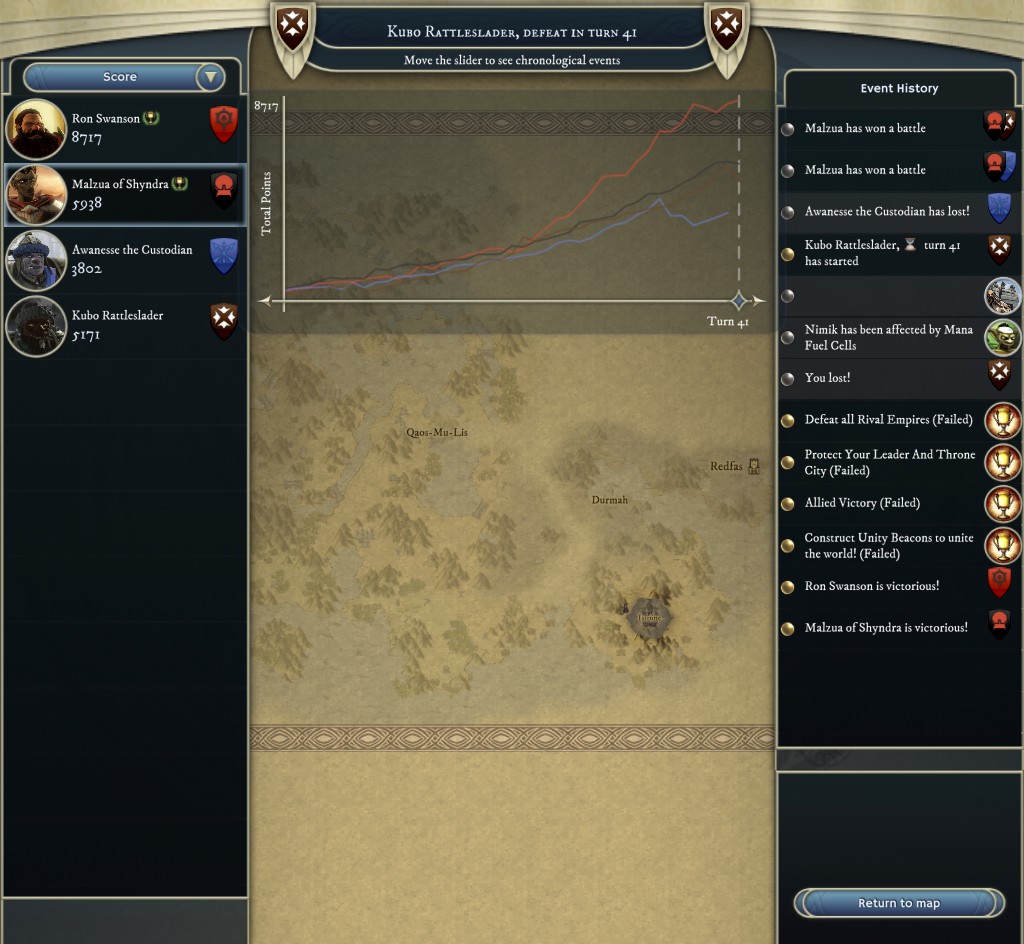 Or on second thought. I cannot reach Markys throne on three turns. Too far away and there was an army over there. Yack.

I say the game rages on. It might not be over just yet.

My naga was unbeatable. 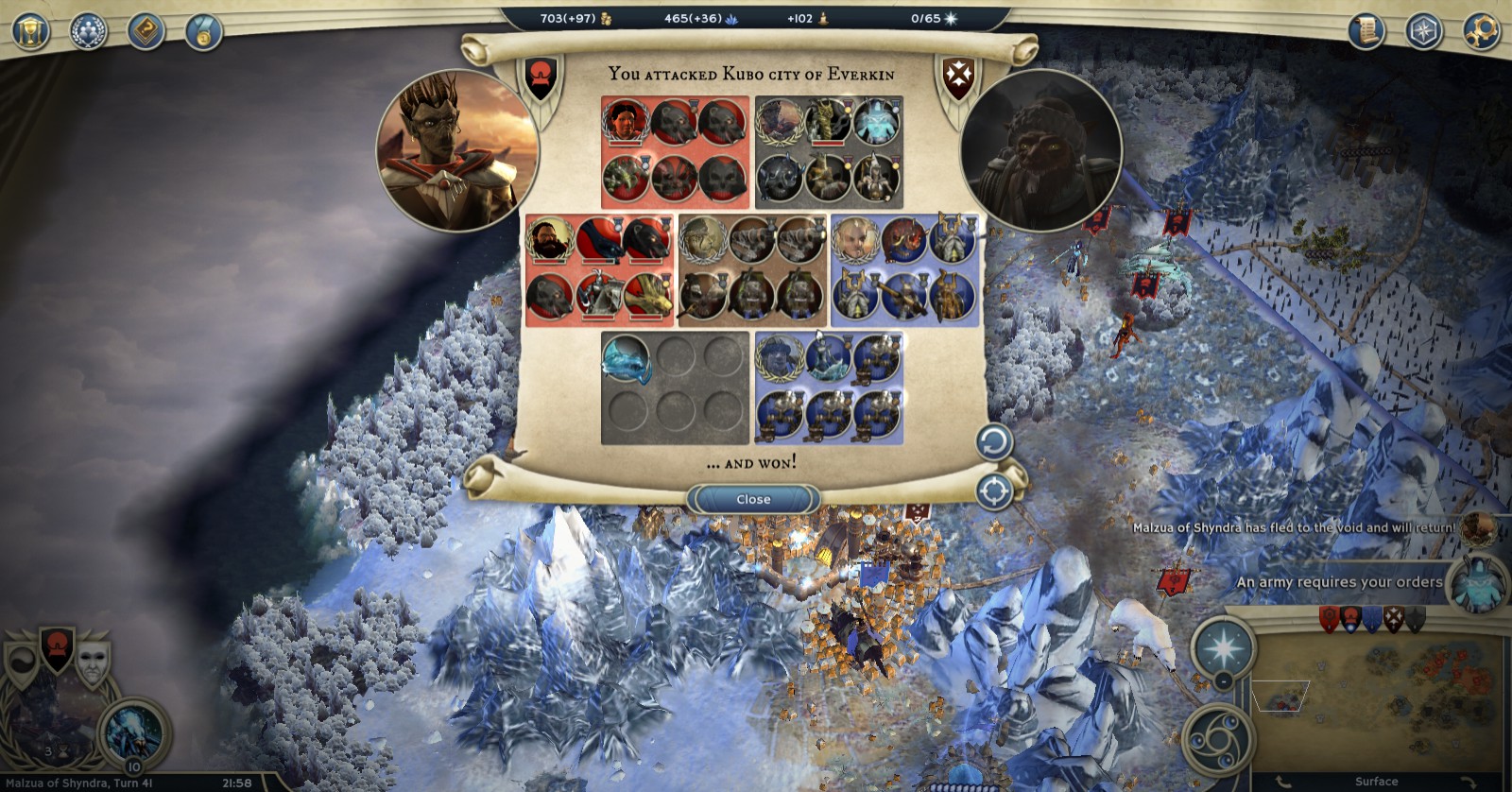 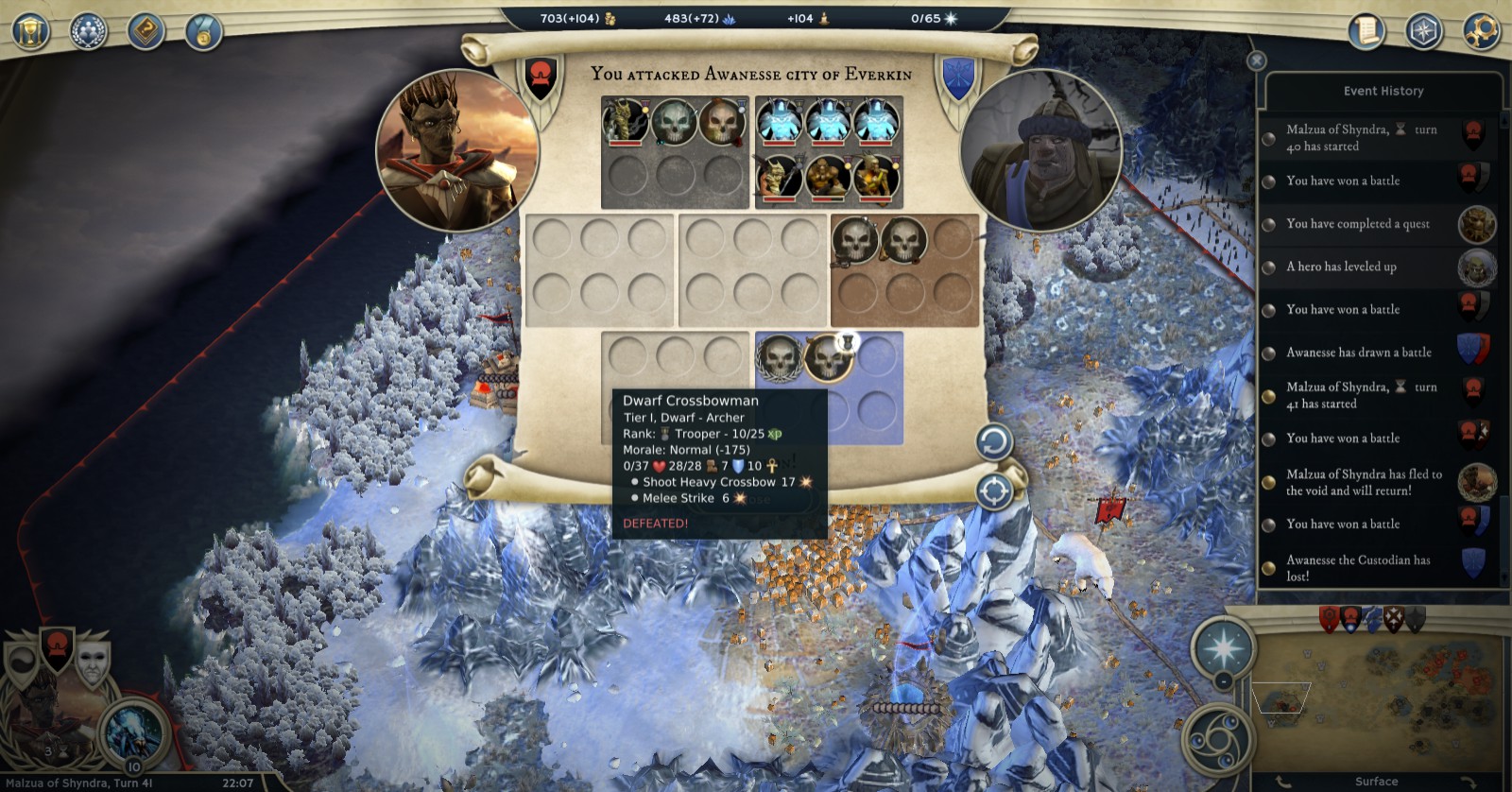 I made huge miss click and declared war on my vassal dragon, so I crashed game. Sorry about that, but such miss click is huge. 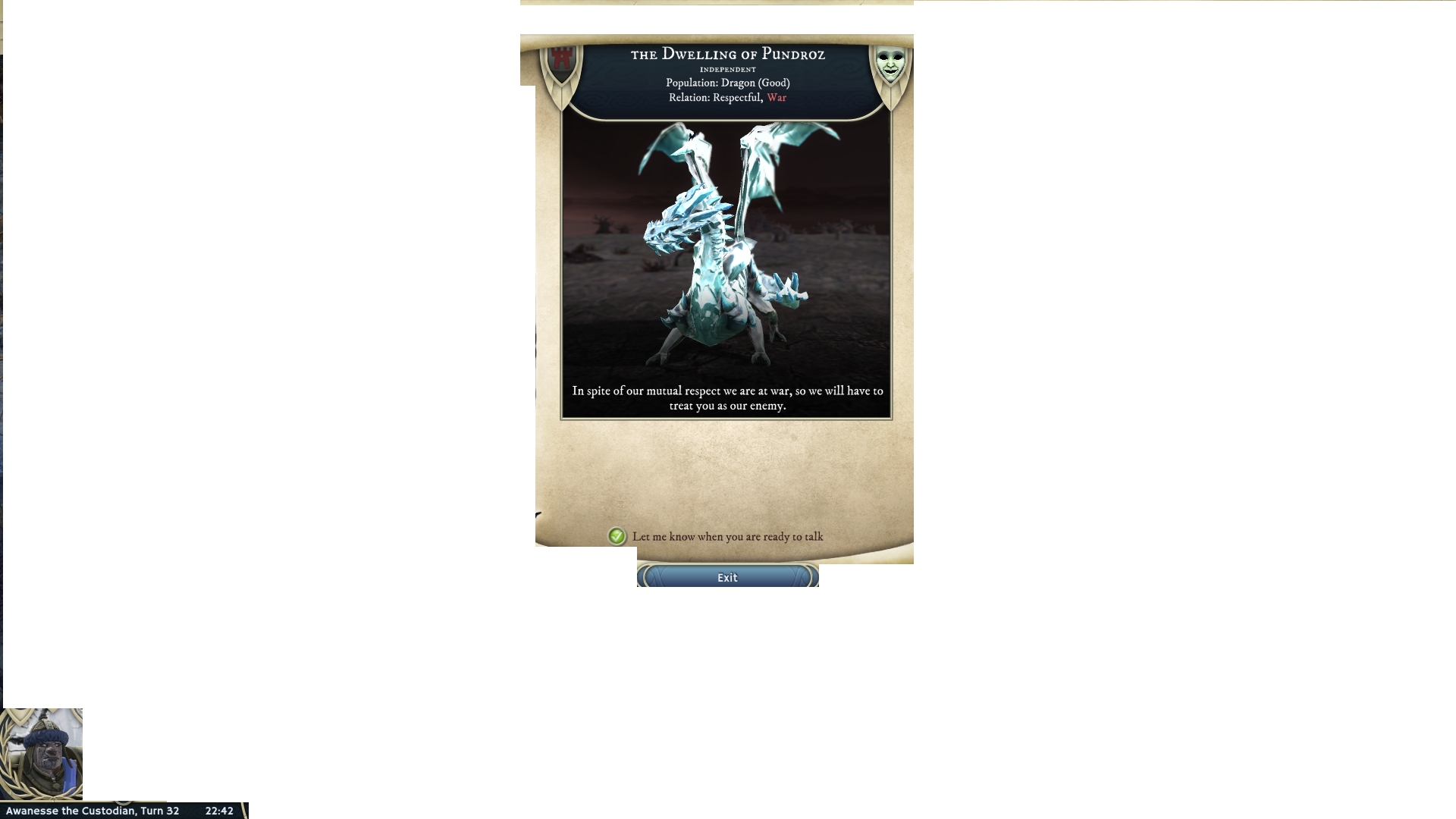 I think it`s ok to do your turn as close as you did first time.

My game crashed again, unfortunately this time I had a fight with a nightwatch that was hidden inside a dungeon and fought that dungeon, I can try to fight the dungeon again with the same units, but It doesn't seem fair... I can just leave it... let me know what you guys think, I will save my turn for now.
Published on Fri, 21 Aug 2020 09:16:07 +0200

I don't know how other people consider leaving their turns for a while with one participant unavailable for almost 4 weeks.


It's unfortunate I started games without some pre ahead planning, occupying a player spot.

I will be offline for 2 days, take care.

I propose teams Marky and myself vs Blad and Refineus.... let me know what you guys think...

Marky, feel free to join in the game when you get a chance.

In team typically me and Dr light is probably on the same skill level. So its equal misplay usually from both parts.

Should I join? I am not sure about the teams so it's your part to make it even. ^^

And one question, do you use the PBEM beta branch? I would recommend that!

Player Jaguer has been removed.

Game is open and the slot can be used again.

Do you want to continue, or do we start over and find another one to do the 2v2?

I think it is almost certain that 2v1 I'm going to lose haha but I can try.

Hello guys, I'm not really inspired to continue our 2 x 2 game, sorry. I didn't like this Strong Defense Mod, I'm also not used to playing with it yet. I don't want to harm anyone's game because of that. That is why I am leaving the game and apologize again, I'll give AoW a break for now.

Hi, I will not be able to play my turn until Tuesday.

Midsummer Holidays have arrived, I will travel to a cabin with no connection with AOW III universe. I will continue my turn Tuesday evening.

I will join later this evening