For my side of this story... I had a decent start, lost some units at the beginning and had some issues to clear some sites to the fact that I started with 2 AD... It wasn't until my 2nd hero that I got a theo...

Right before I took Sin's settlement for the first time I lost my leader to an ogre very stupidly because I thought my leader could take a hit from it, but it didn't... I knew he was starting to scout my territory and I had my main unprotected, so I rushed a hunter and moved the remaining of my army back to my main, so I could only attack him with that single stack that he killed. After that I focused on keeping an eye on a possible scout that could be coming from the south, and as soon as I got the opportunity I killed it with my penguin

After my leader returned, I noticed a tavern that was very close to his main, but before getting there there was an undead boneyard, which I tried to take and killed my leader again... Which was annoying because I couldn't cast eldritch animal for like 6 turns! Then again, I was feeling fear again, so I knew I had to keep control of the front flank and keep him busy so he wouldn't flank me and attack my again defenseless main city...

I sent a new sorcerer to take the bonyeard and then the tavern, while I was assembling my leader army again with the party that fled Sin's territory; I noticed that Sin took a chest that was on a river, so that told me where his main stack was, I was hoping that he wouldn't be able to reach my sorcerer, but even if he did, I was ready to sacrifice it so I could kill the rest of his army with my main stack... and it worked...

I razed that tower so main stacks could sneak unnoticed to his territory, I wasn't sure if I succeeded or not because he had a monster hunter nearby and I wasn't sure how much vision it had.

One thing about the map, that was both an advantage and disadvantage for me is that I had no access to the UG, and I had already explored most of the structures on my side, I was thinking that Sin could've been in the UG expanding his empire because his economy was still good regardless of the harassment that I was trying to give him. I had no more structures to level my units so I was worried about that. But it was also a good thing that I didn't have to worry about being flanked from the UG.

Thanks for the game! I liked playing with Halflings, but I have to be super careful with the happiness, losing the leader is catastrophic for Halflings.

This was one of those games where my initial reaction to my loss was "I don't know what I could have done better!".  But, of course, I could have done certain things better.. if I knew what was coming. Perhaps, leaving out my wounded T3 from a battle so I would have lost a T2 instead. Not returning to take back my new settlement immediately but finish clearing some important sites. Or just realizing from the get go that we were very close on the map, so I should have full on produce units and not "tech".

I started in the bottom right corner, and I thought I was doing decently, aside that I couldn't clear the Forge, which was defended by two T3 versions of the Fire Elemental, next to my throne (It feels like the game is hating on Frostling with that start, which always seem to be the same if there is a Forge nearby.), and my racial independants was across a small lake, more to the east, with a mountain hex in the way on the shorter route. I thought these to be minor nuisances at the time. But, I lvl-ed okeyish, didn't lose anything important, managed to find and befriend (and shortly after vassalize) a Dragon Dwelling underground, and, since I got a Frost Queen as a quest reward from my racial vassal, I thought I could take a Hall of the Forefathers around turn 14. This is considered very early for me to attempt a Legendary site.

However, all of a sudden (for me), the two Ancient Ruins to the west, just at the edge of the fog of war, got cleared, and DrLight took my new settlement north of my throne. I think it was turn 15. I had his racial vassal revealed by a cartographer tent but I had never looked close enough at the distance to realize how close he was and how fast he could come. My army was more to the east, preparing to take one of the Halls, but I turned back to retake my settlement, and then chase after the intruders.

I was confident about my chances. P.s.: I have never played against Halflings. (It isn't true but it was long time ago and my story sounds better this way. 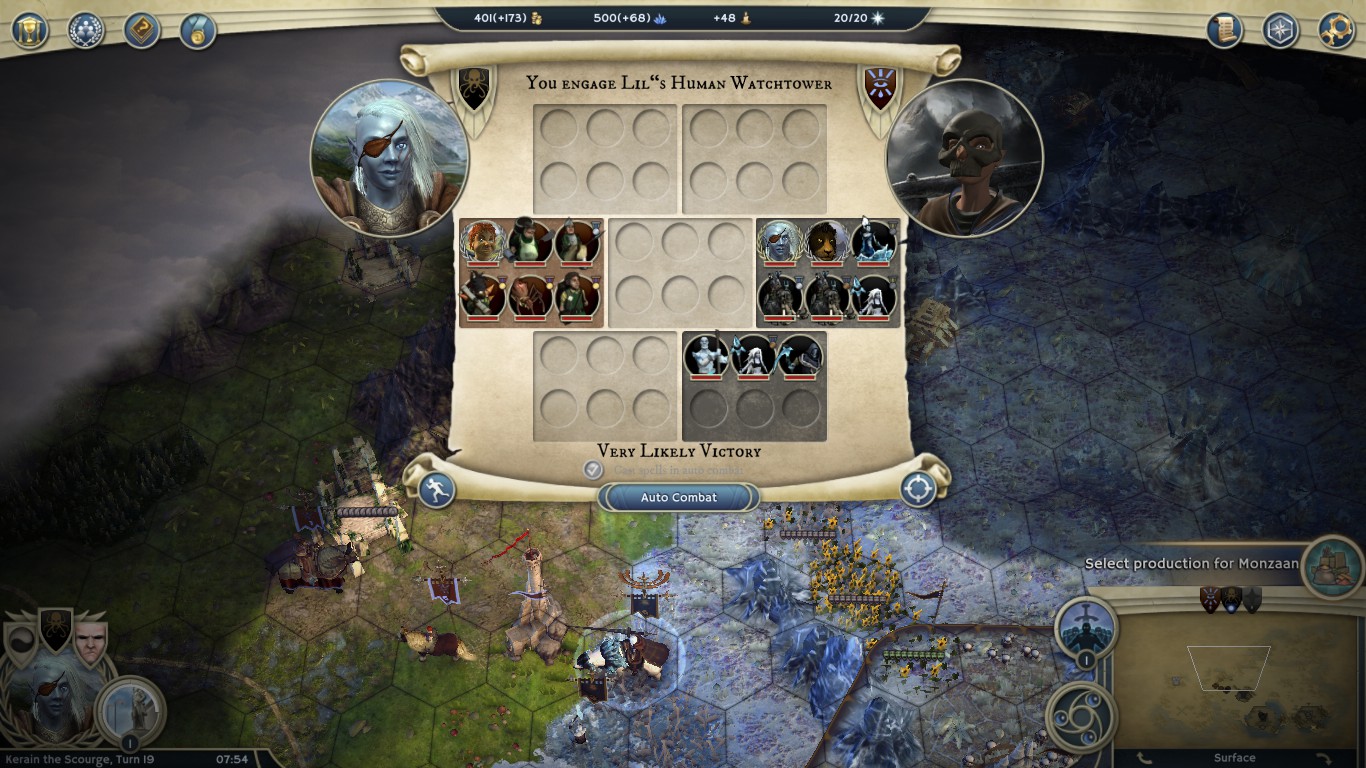 Now I know too why some players hate them. 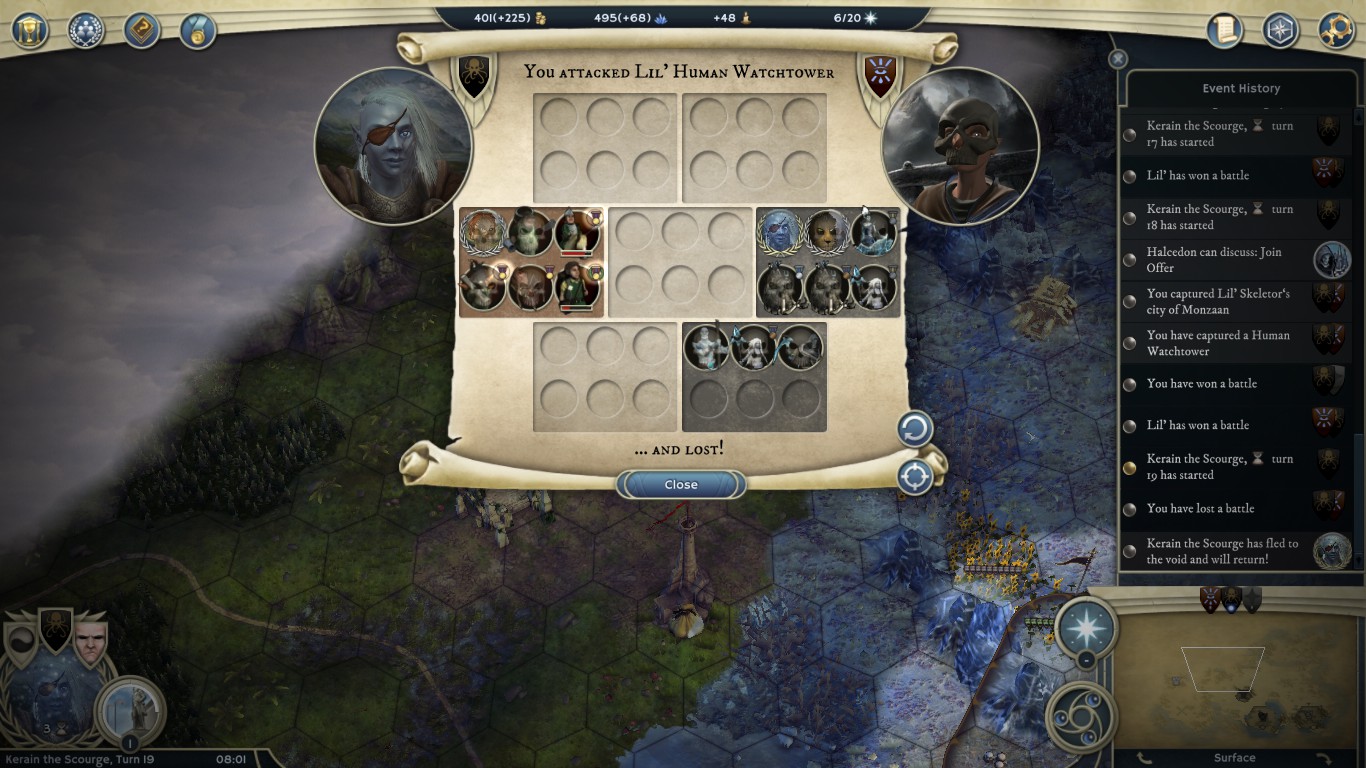 That was more or less all I had. I had to ask for tribute and bought a T3 on turn 21 from a tavern in the domain of my vassal, to have something to defend my throne in case DrLight has more coming soon. As it is seen on the screenshot, gold was hardly ever a problem for me. Producing was. My small settlement was changing hands often, and I could build so many units from one city (my throne). For very long I didn't buy out my racial vassal because I barely had the units to protect my throne and the new settlement.

After one of these owner exchanges I have managed to catch some stragglers but the hero managed to get away. 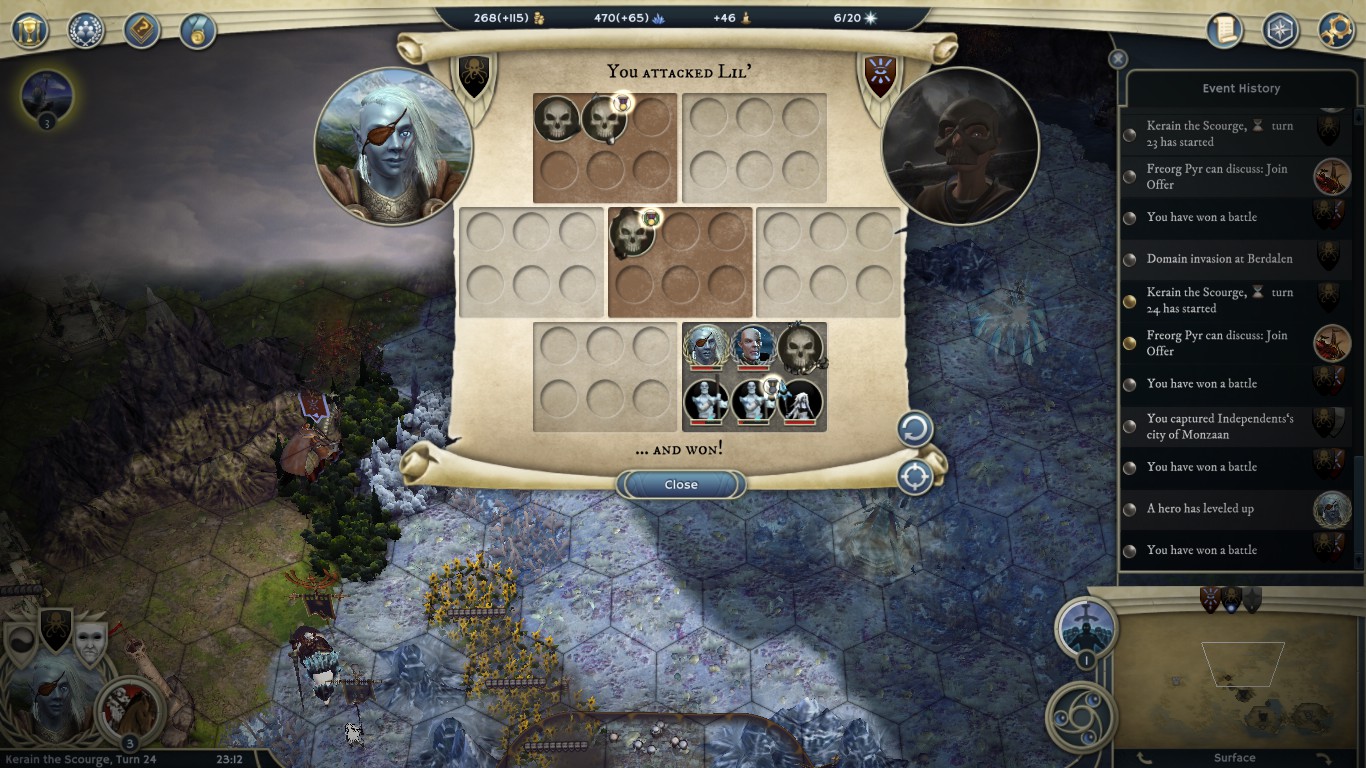 For a few turns my settlement was left alone, however, since DrLight had released it as vassal, I had to reabsorb it. In the meantime I dared to clear a nearby Tomb, managed to fend of some independants, and bought out my vassal at last, and started building producing buildings. Oh, and, DrLight razed the tower. Then he returned and took my settlement, again, before I could have made it mine, killing my two defending Monster Hunters. I managed to retake it with more losses than I hoped. However, I had no vision whether the next turn more was coming. Unfortunately my fear proved to be correct. 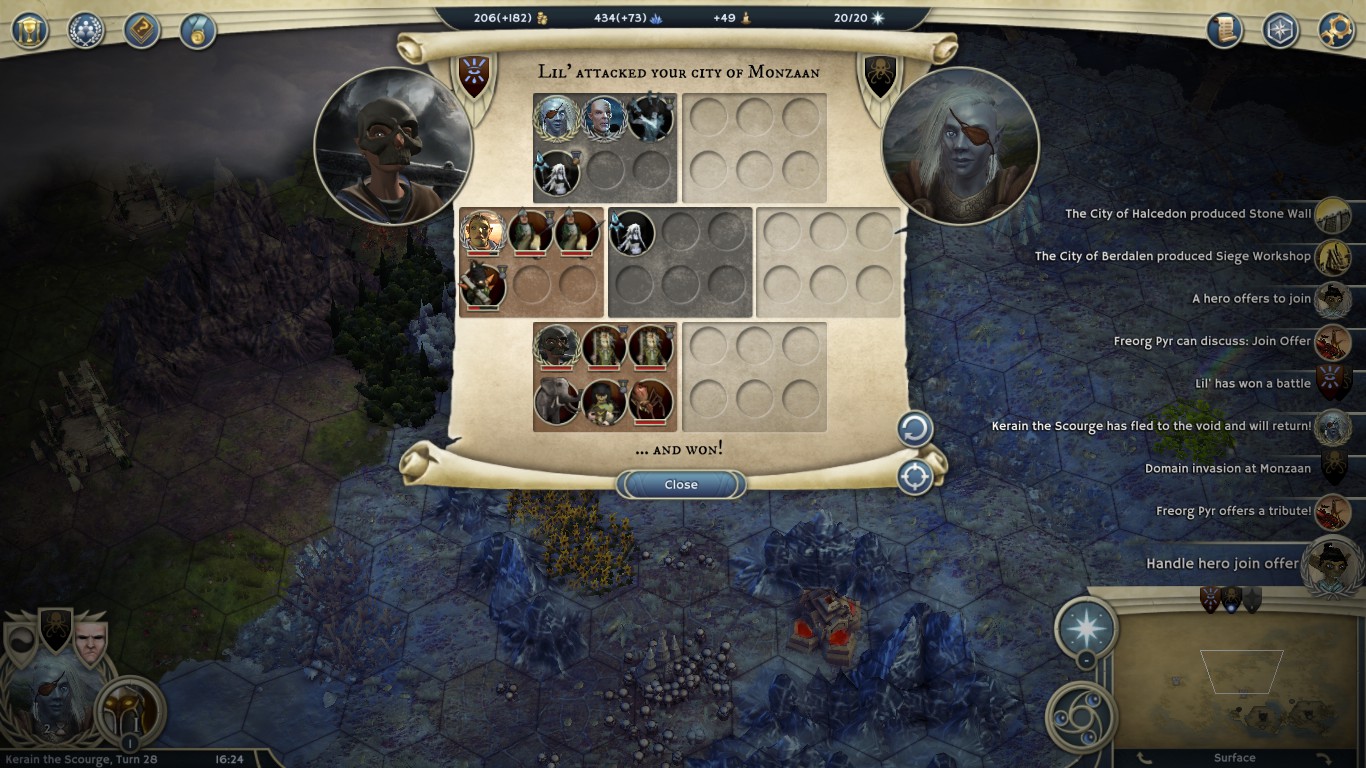 My meager army protecting my throne didn't have a chance, so on turn 30 I lost.

Congratulation, DrLight for defeating me in 1v1 at last. You have lvl-ed up! 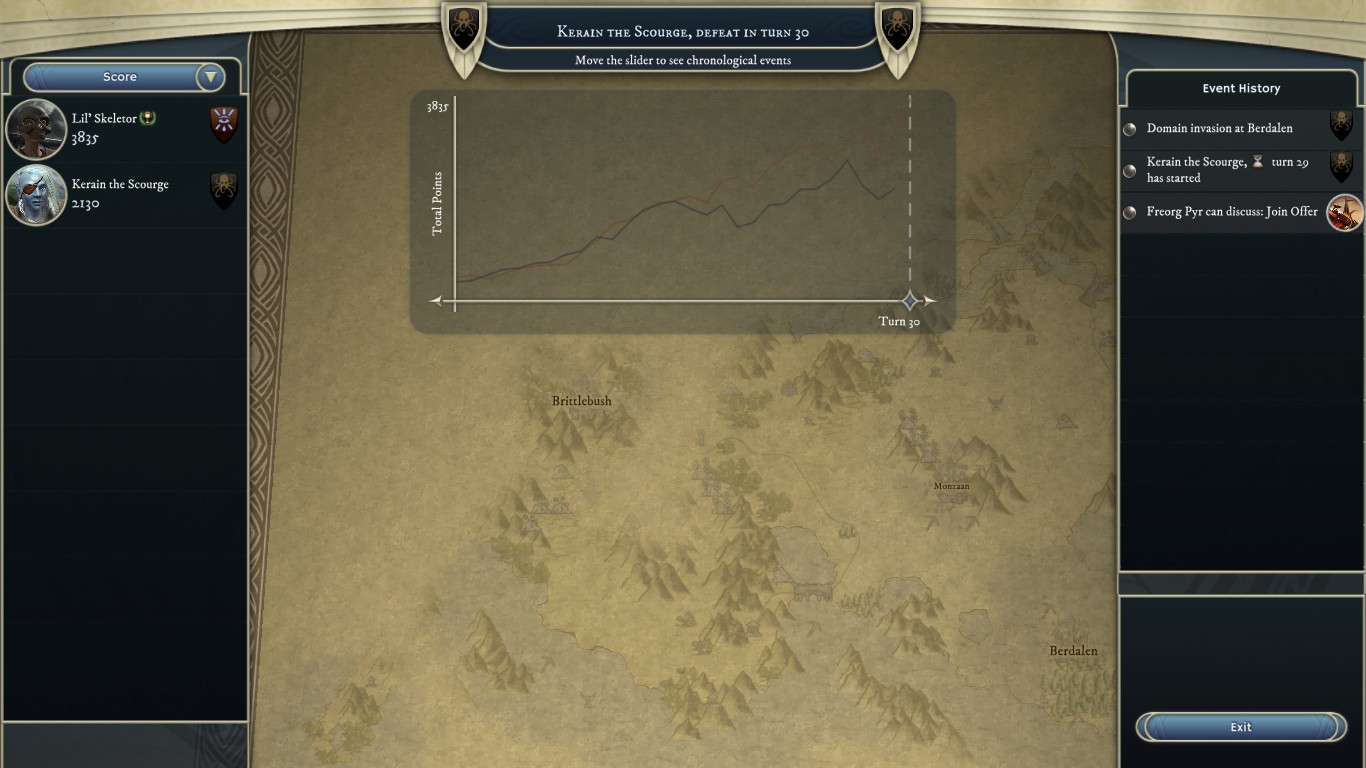 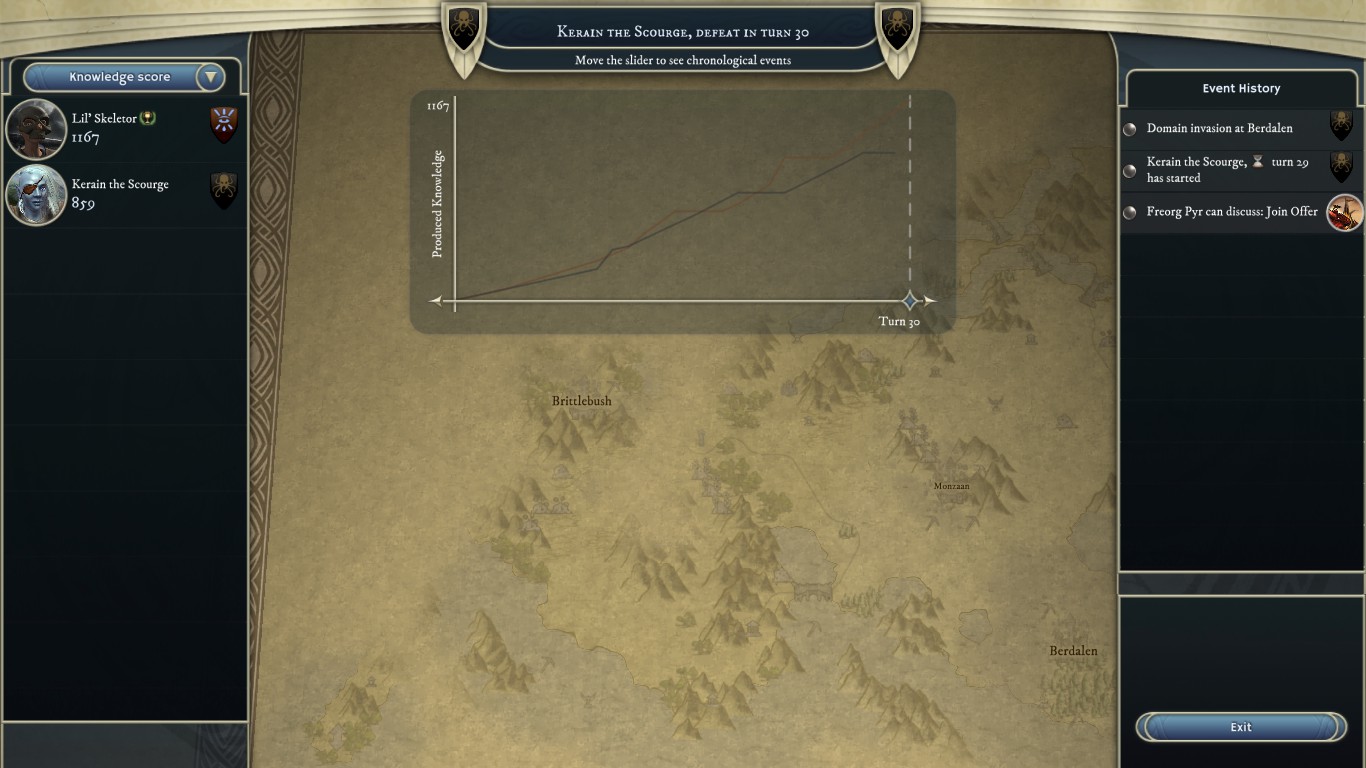 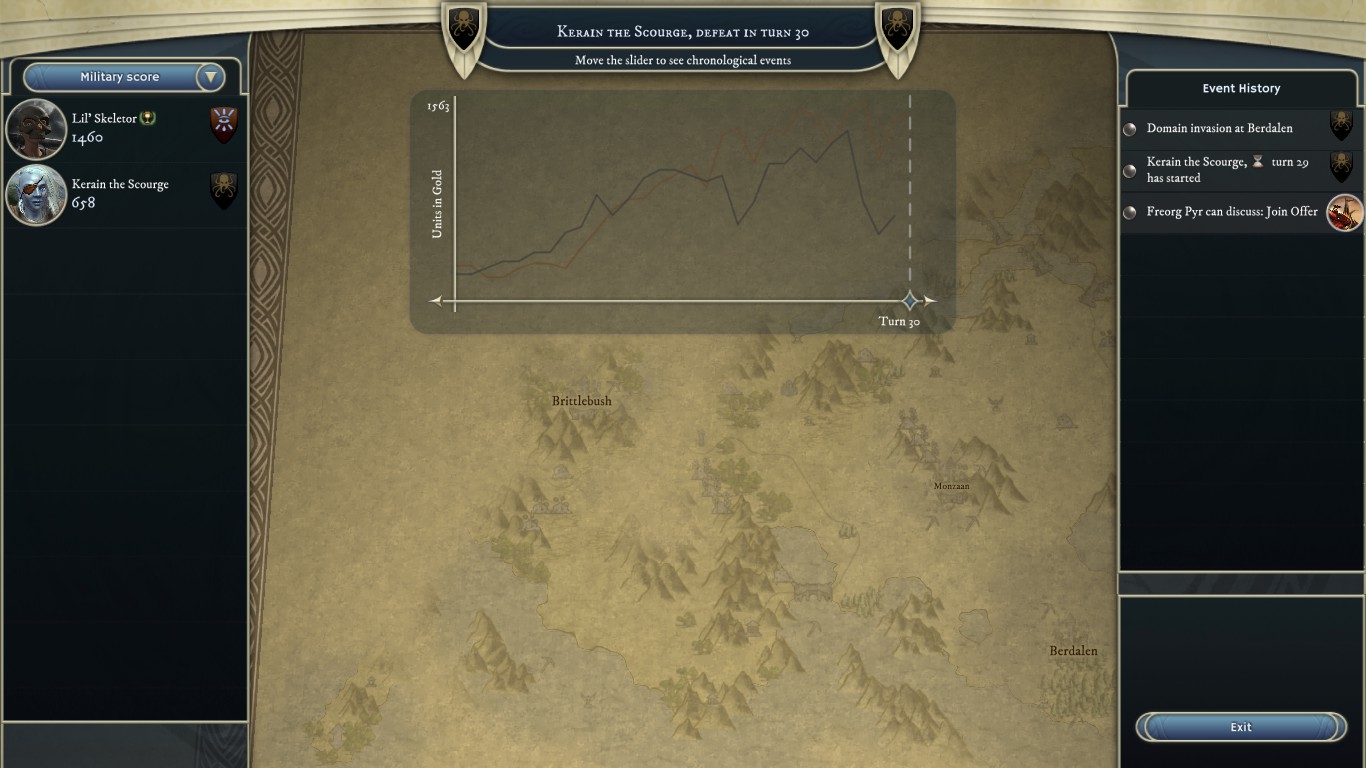 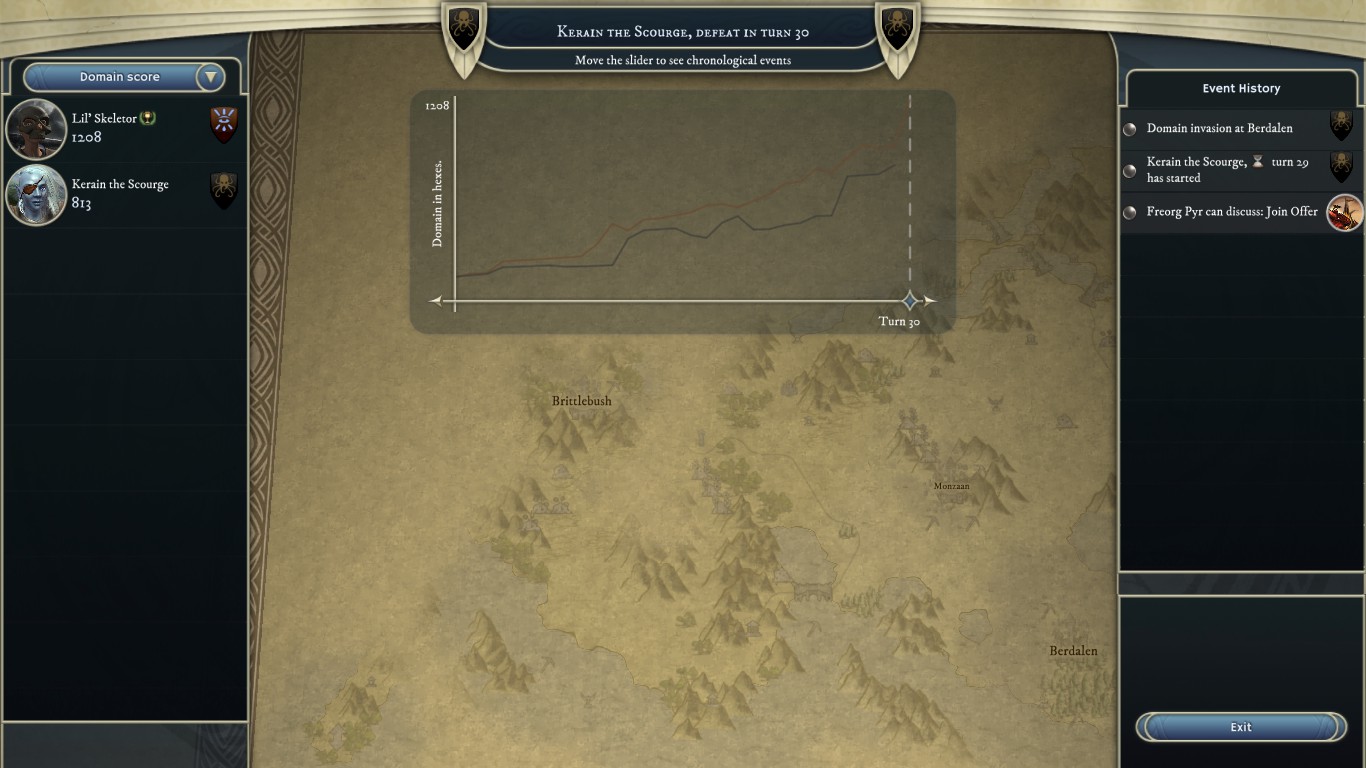 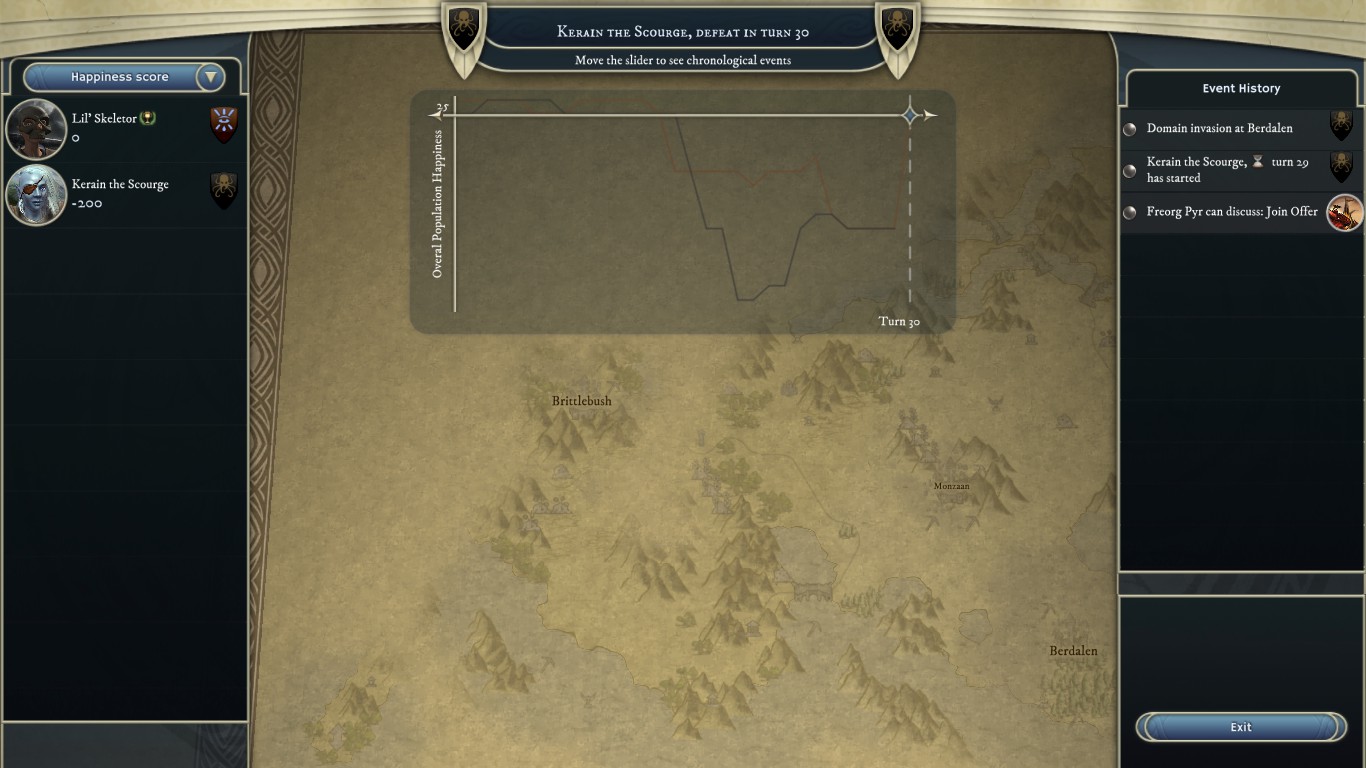 As an extra, behold the explorations of my adventurous Swarm Darter while all those conflicts happened above gound. 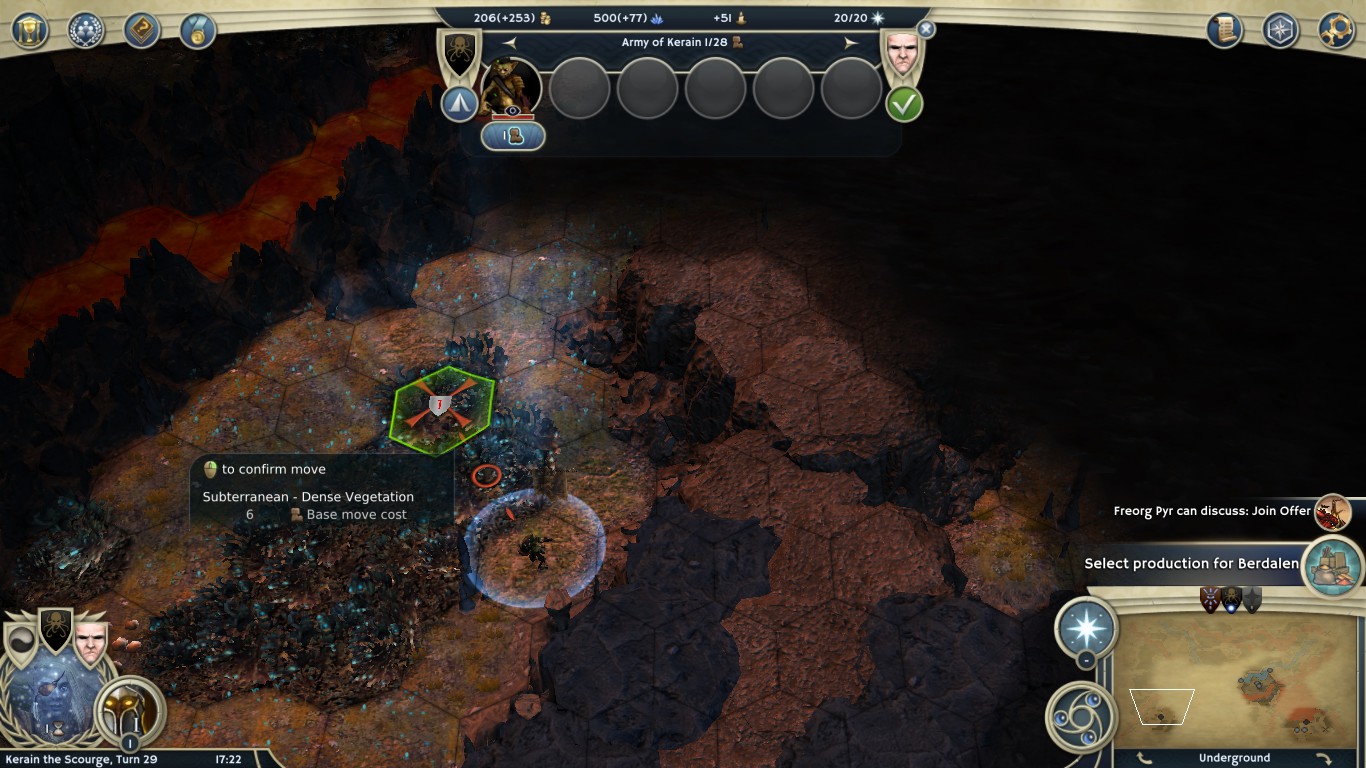