Great match! Congratulations Refineus on this well deserved victory! And thanks for the Screenshots, I couldn't take them...

From my side, as Refineus said, I had a very bad start, I just was not used to play with dreadnought at all, so at the beginning it was very hard to me to clear some of the sites, I ended up loosing all my initial stack, so my first 6 turns were just building my stack again, which now with archers and cavalry made everything much easier. Since Refineus had a very good scouting, by turn 15~, I was very afraid that he would realize that I had nothing to defend myself, at some point, when I lost my leader if he had attacked me full force, I think it would've been an early win for him.

I decided I wasn't going to play too aggressive and wanted to build an economy, so I tried to expand the most I could... I liked the "Jean de Metz tactics" name, yes, that's exactly what I was trying to do, clear sites with my party of cannons, and it worked, but before it did, It didn't, so I lost a party with my most leveled hero trying to clear a dungeon, I wanted to cry... Eventually, I became better at clearing the sites and kept expanding on the surface.

When I started to expand underground to take Refineus dragon vassal, I encountered his main stack, he killed my leader then and started to advance from the ug to my main, I was a little concerned at first, but his army was getting casualties and he was not replenishing them, so I knew it was just matter of time for him to die, so I just waited and continued my crusade to his territory with cannons and tanks and my leader. Until this point, I was feeling confident on my economy, and I liked that I was able to recover any cannons that I was losing from his attacks very quickly. When I arrived to his territory, I thought I could defeat him just with cannons and tanks, and that's where my error lied... He then got his first tier IV unit and his Shrines, and I didn't have any means to get a tier IV unit, even though I cleared many sites, I didn't get a summon that I could use and I didn't have the research to get Juggers.... From this moment on, I knew I couldn't defeat him, he had this unstoppable 2 stack army with phoenixes and shrines and I didn't have any unit to counterattack it, my mass cannons did nothing.

The other problem I had was, that I razed every city I could take, that put me in an evil alignment and I had gray guard, my cannons were dedicated to neutral, and that also made them almost useless.

At the end, I think we both destroyed our empires, I had a city left and 3 of his, but I had no way to defeat his stack, so it was just matter of time,  my leader had some cannons a priest and a tank and they were killed (except for my leadeR) by 3 archon stacks that were on my escaping route =P.  I was just crossing my fingers to be able to kill just his leader or that he would ran out of resources, but that didn't happen.

This is the longest game I've ever played, but very enjoyable, it was fun.

In this particular game I was fortunate with excellent scouting, two good vessels and everything went in my favours.

At turn 25? I had roughly 4 stacks and I caught Dr leader alone with his leader and a settler building a city. I defeated that and I saw a hero coming in with a stack. I then decided to attack a hard-edged strike force of two knights and a strong leader. I then lost my leader and a hero stack.

Then I had my secret weapon enabling me to heal on shrines. "The book of DrLight" this went between my leader and hero to preserve those shrines. Unbeatable at this point. Without the book, I would probably lose. 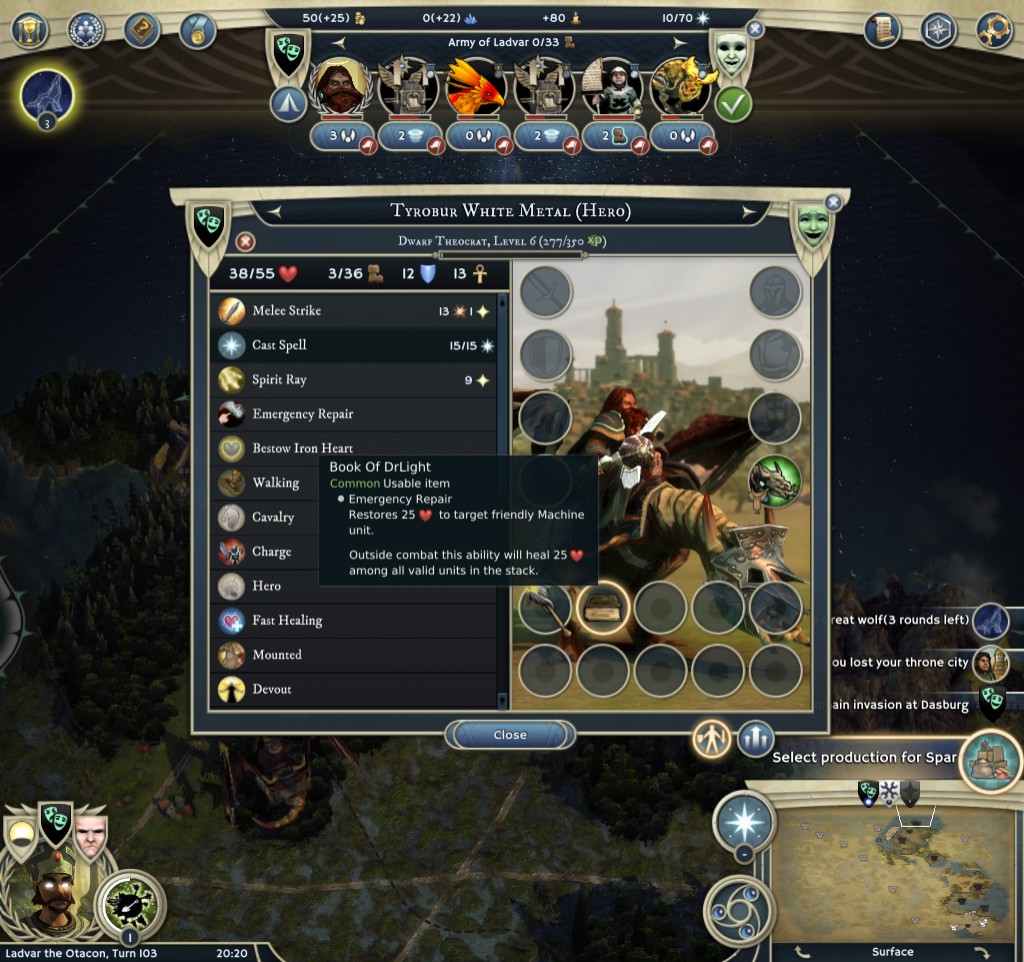 Then my mission was set to destroy Dr Light. He took all my cities and throne. But I started clear his and vessel then. Risky, without a throne. But I was determined. 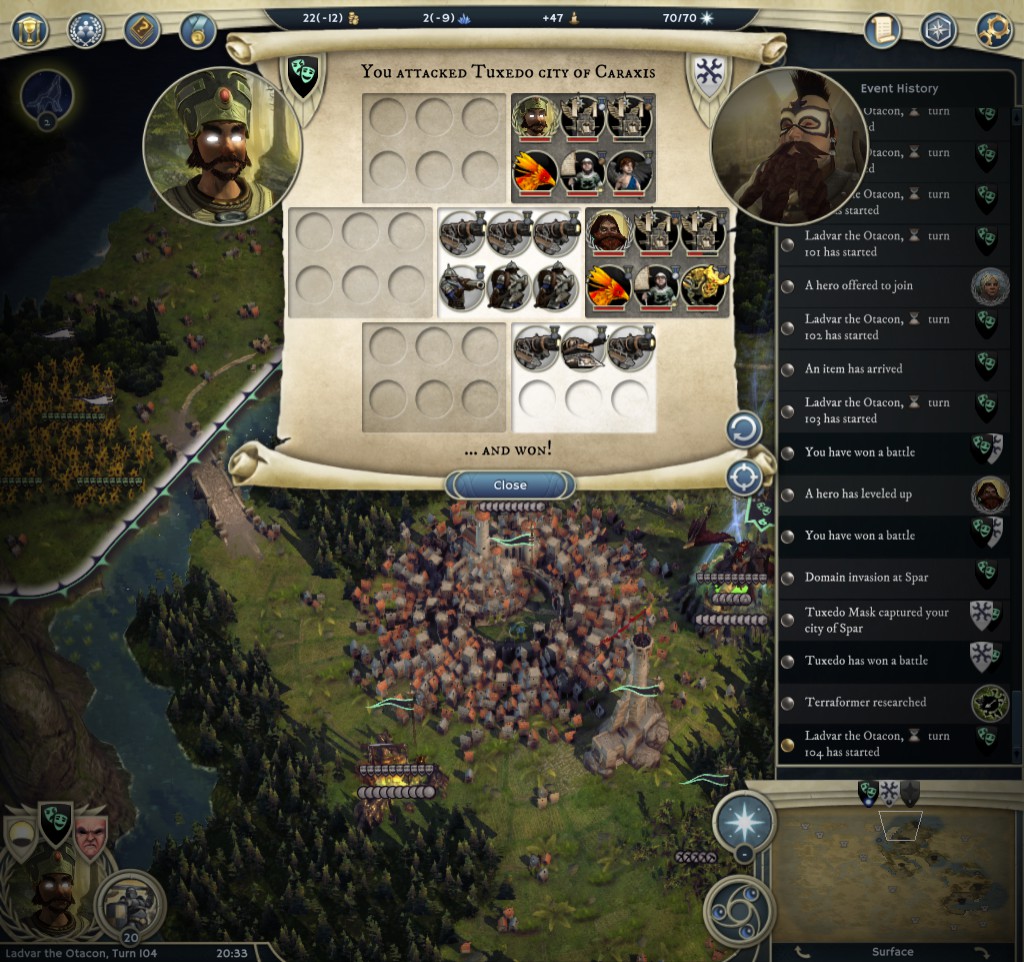 With my two power stacks, I will win. 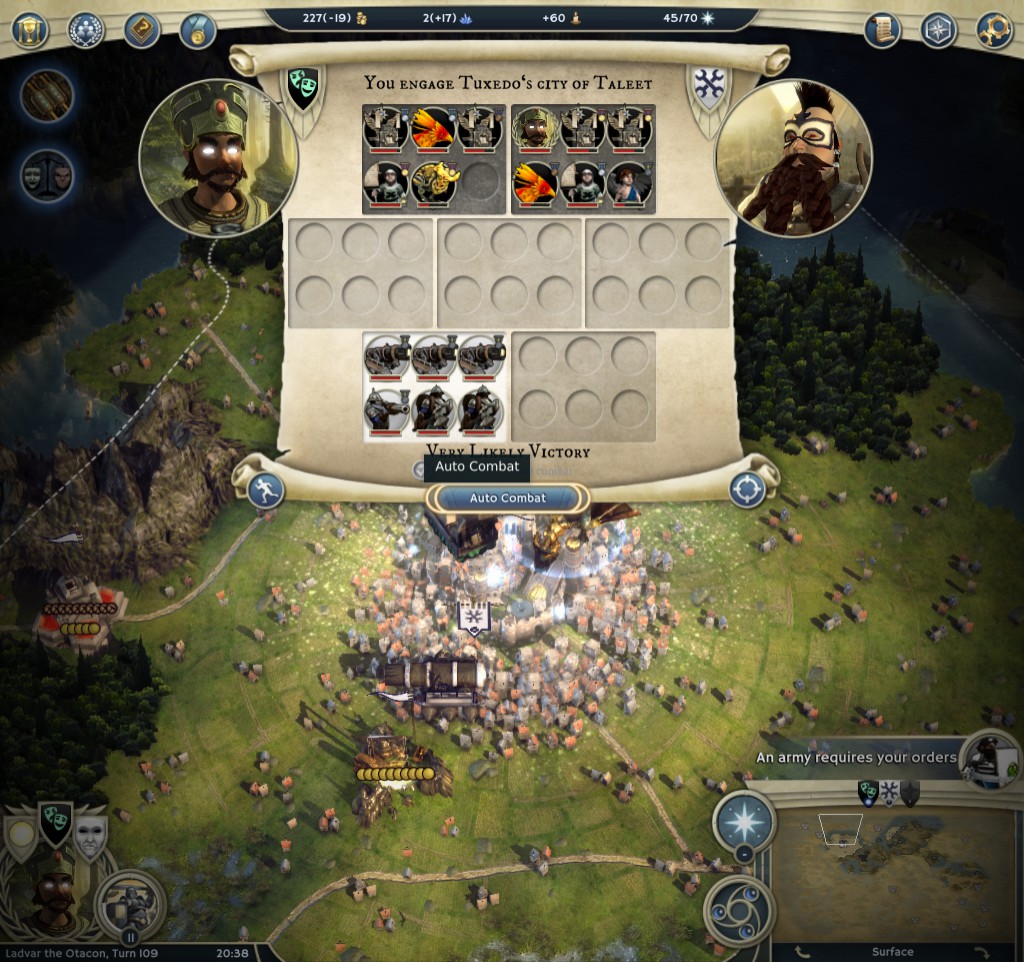 His throne had three stacks and 4th stacks I believe with a builder only inside. Yay for the halflings.


He may have had unluck with global happening spawning animals everywhere taking out everything. So it was merely a time question before I would found him or he got beaten by the animals.


Great game I really enjoyed, very difficult to beat a Dreadnought with spirits, but I were quite clever 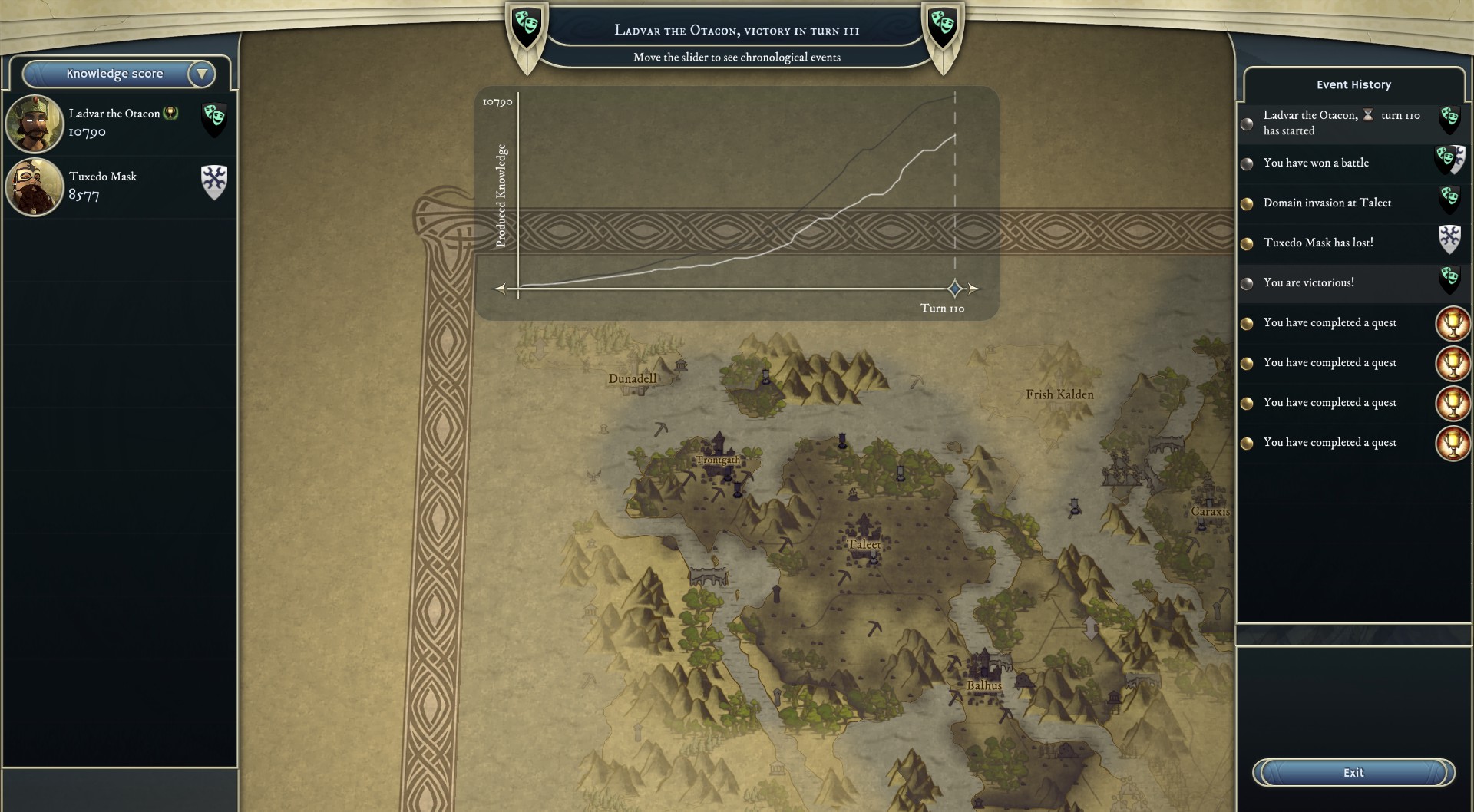 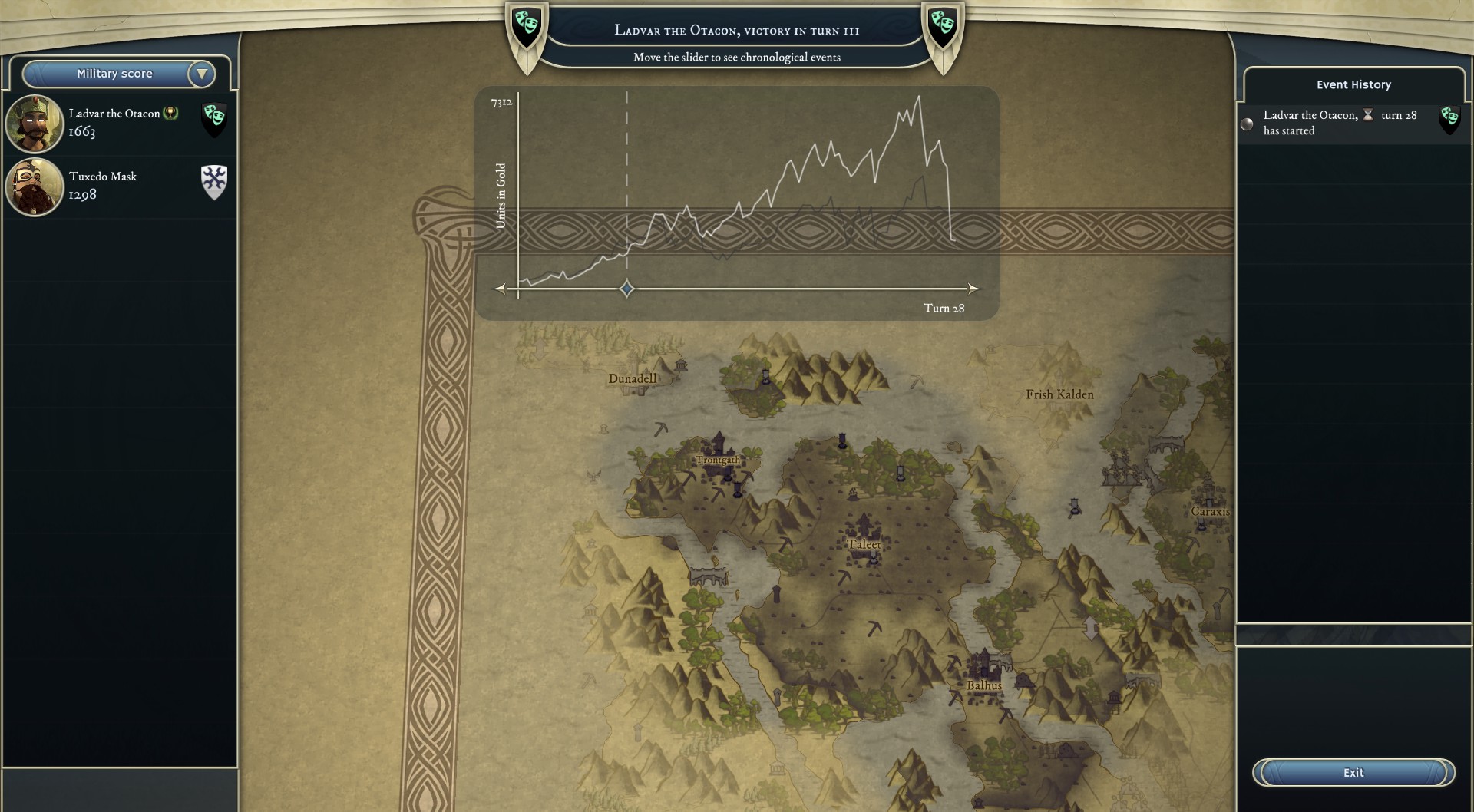 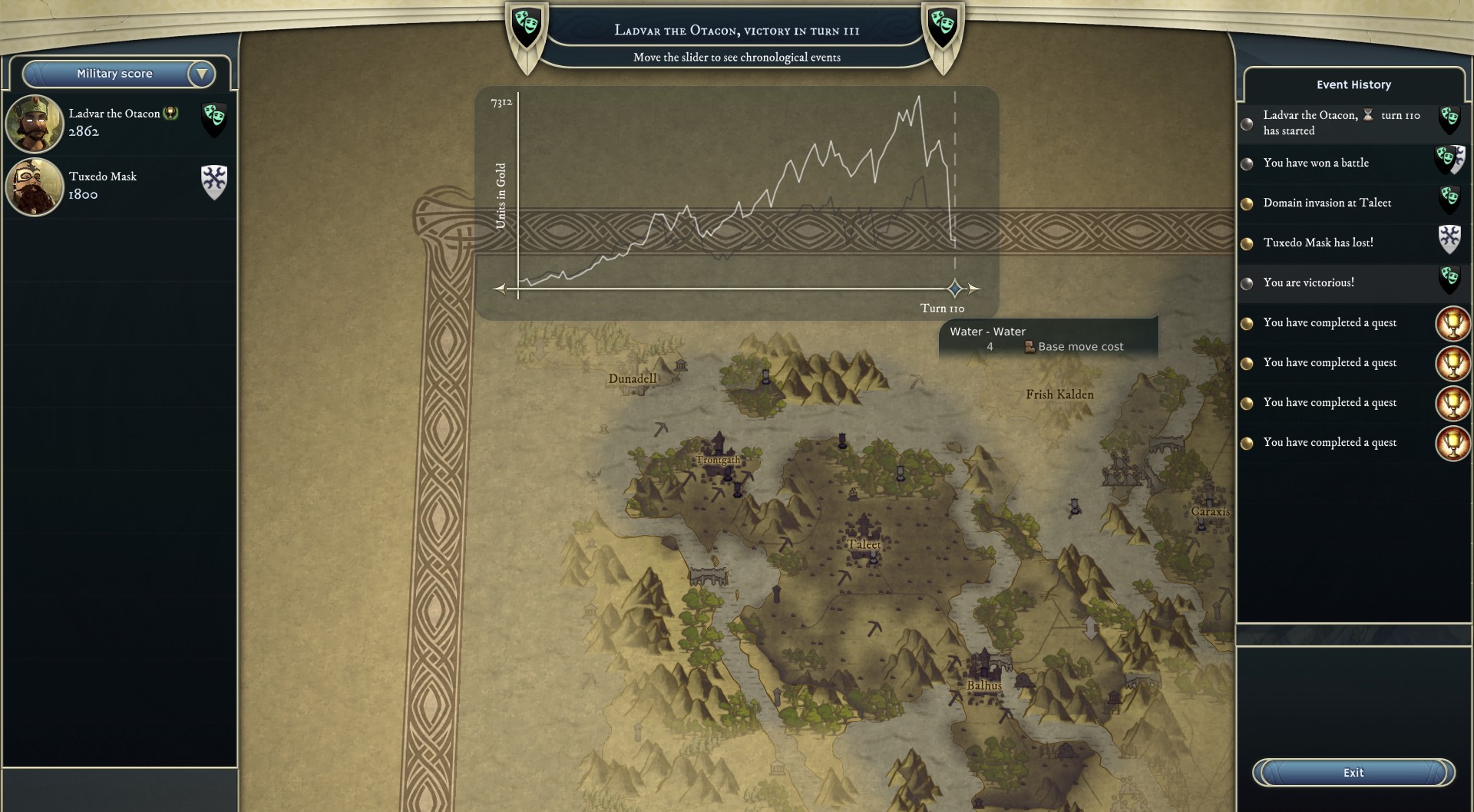 I had hoped to finish this game tonight. But may not be that, just not yet.

The great throne of Dr Light fallen to the Halflings. The avenger stack merciless hunting for Dr Lights leader. They won't stop before his leader is caught. 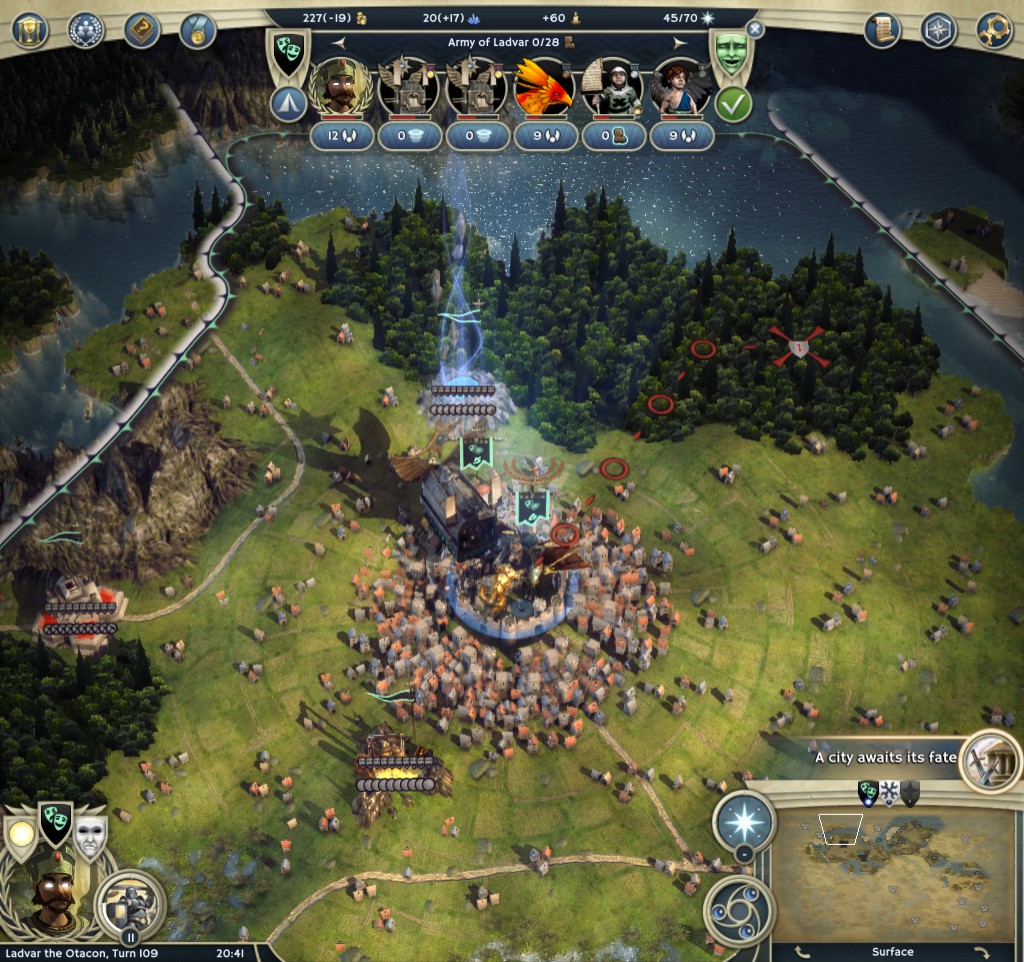