I had quite bad map with dreadnought.

No research at all like keika and could finish evengelist so late.

And I had some turns for just moving.

I really wanted to find where is keika but till the end of game I couldn't.

-> it must be more than turn 15 for sure and it's not super fast and 7/7/5 of keika is definitly some wrong. He level up much faster in normal.

So how about others think? I can say almost 0% chance to win if cherub attack crow and very low chance crow attack cherub.

This game was not impressive, so there is not much to say.
Will tell how it was going from my side and hopefully other guys give some details from their side.

Things were not good from the beginning. I had no mana node in domain, so mana was an issue and I could not summon and maintain much crows.
There were a lot of undiggable walls and terrain itself was not good - I spent a lot of time to understand where it is better to explore.
I think I did small mistake in forge and lost one untouchable and few turns later lost another one vs tigrans trying to keep deadly wounded hero safe from high damage rolls.

With 4 units in stack I fought few dangerous battles, where my units were dangerously wounded and some battles ended up with 5-7 HP on my leader and hero. Luck was definitely not on my side in this game, I remember one battle in necromantic circle, where halfling reanimator got 4/8 luck miss and also 4 critical strikes for other reanimators in the same battle.

Needless to say that I had hostile outpost size neighbour which I conquered quite late.
There were no quests, no units from rewards, no farms and so most of the game I just had starting army with a few produced untouchables.

I cleaned almost everything and left a few sites with good units for converts and waited for bards.
There were no knowledge scrolls nearby, so I researched bards quite late and hurried two of them.

I think I was extremely unlucky with converts in this game. With disgusting stench and noxious vulnerability I was able to convert very few units. With 2 bards and leader and 40-50% convert chance each I was able to convert only knight, orc's black knight and sun guard.
I missed my chance to convert spider queen, monster hunter and node serpent (which I really wanted for wizard tower battle).

Scouted both Skuns and Novograd locations quite early and we all were quite near to each other.
Most of the game I was keeping track of Novograd's main stack and he ran from top left corner to bottom right corner like hurricane killing everything on his path and taking even mystical sites (dungeon, ziggurat, lich king). As always he was leveling super fast and got 11/9/8 heroes while our heroes were like 7/7/5.

At some point we discovered that Skuns approaching to Jean's cities and their armies were close to fight. They had similar army strength, probably combined Jean's army was stronger and Skuns (as we thought) retreat.
We were not good in scouting him (and there were a lot of crows which could easily kill scout) and thought that he went back and so Jean decided to move his main flying/swimming stack to clean some sites on water but next turn we surprisingly discovered, that Skuns fooled us and with all his 3 stacks moved to Jean's throne.
He didn't attack throne immediately and on next turn took Jean's secondary city, but turn later he also attacked throne city with 19 vs 11 and won.
To be honest we expected this battle to be more bloody - Jean had 4 range units behind walls and also few strong t3 units, but Skuns won it easily and didn't lose any important unit. 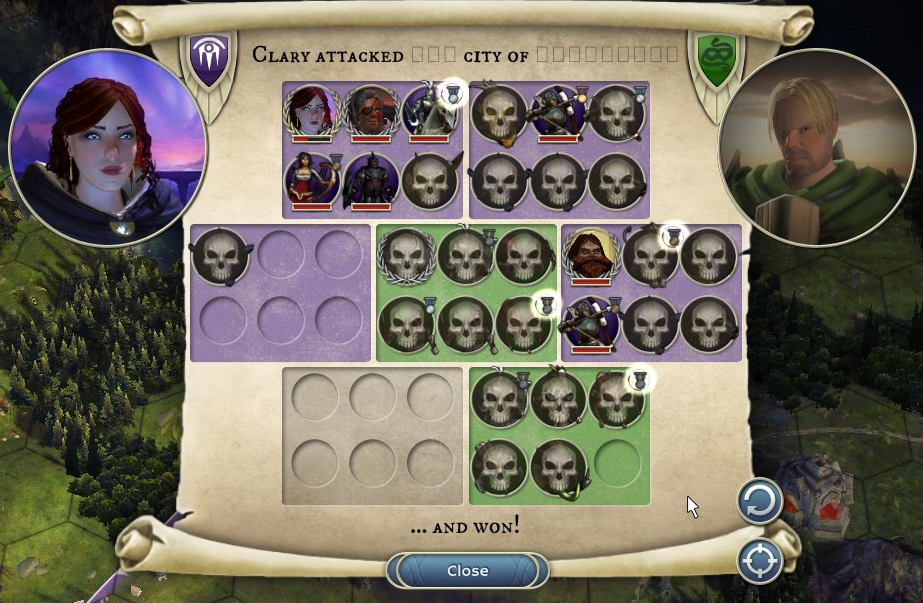 (my personal favourite - veteran monkey with sabotage destro yed wall in one turn and made breach for melee units. I think this fact impacted much on Skuns losses)

It was pretty much gg, but I thought that we still had small chances to do something if Jean captures Skuns cities instead (he still had 1 stack of flying/swimming units) and I plunder my cities and raze Novograd's cities, so we didn't surrender immediately.

I gathered 2.5 my stacks including 5 assassins with 40 move points and went toward to Novograd's cities trying to take wizard tower with regrowth on my way, but failed to split army well and lost elite warg rider and my second theocrat hero. I think it was my fault that I lost them and I could fight better, but there were 2 king shock serpents and 80% of my strikes ended up with stun (even when it was only 20% chance of it).

Also I scouted that Skuns has at least one stack home cleaning sites near his vassal, so most likely there were no chances to capture his cities without losing everything for Jean.

So we decided to surrender, our opponents overplayed us without chances.

It's good to see you back, Skuns! How did the repair works go?

I've had a crash in the game, I think the pc is to blame, I am running too many programs at the same time. The game itself works fine, no lags, etc. I'll try to be more careful to make sure it won't happen again. My apologies, guys.

Hi. We've just started to make repairs in our house. So possibly I can't play my turns for about a week. Sorry for that

When the situation will change I'll notify you

Name: Three russians with Novograd in a boat.

Medium map, far starts, continents, all the settings match the 2018 2-2 tournament ones.

Alright, let's play with standard settings then.  A typical 2-2 game =)

Normal research, far starts, stuff like that. Novograd has suggested a large map but nobody else has responded with "agree" or "no" so let's maybe play this game on a meduim size map? Waiting a bit more time for any responces and then I will host it.

I haven't created the game yet. Gonna do it tonight.

I also haven't thought about any restrictions, should there be some? Like forbidding to take certain classes?

I am not sure the players will like this.

No, you are not late. Mahimka has informed me that he is not interested in this particular game and that he prefers to play a free for all game (quite a good idea for our next game actually) so if Novograd agrees to team with you then we can start.
Published on Sat, 25 Apr 2020 09:40:34 +0200

H-m-m, maybe I'm too late to fill this party? If so, sorry for that

I can leave at any moment

As I have said, I am interested in playing more games with those players who came to the battlefield after I had stopped playing.  One of them is Keika, who is by the way russian like me

He hasn't played many team games while I have got quite a lot of experience in them (not yet forgotten I hope xD) so I might be able to share some experience with him here in my favorite format.

We are searching for 2 players who can form a team and play against us.  Though we are both considered to be quite good players (at least not newbyes anymore) we don't have any experience in playing together so I don't think we will be able to beat a very experienced team. That's why there is no skill requirement of our opponents: they can be either strong players who also haven't tried playing with each other in team or even some medium-skill level guys who have tried team games and therefore possess some team games experience.

To sum up, everyone is welcome XD

I made appointment with mahimka.

And Is it ok for large map?

kill some russian Fur Soldiers ? perhaps jean if you wish to make the game intersting somehow and i get an offer as my ally --> and appreciates a good beer etc....


u should really consider adding some flavour to your brew here.... i don't mean in the 25  mod per game that i truly prefer but perhaps add 2 or 3 in addition to balance mod ?


but if there is no beer i still might consider drinking your straight vodka shoul an intelligent cohort proposition me with some kind of Plan C.... ( open own vineyard plan ) drink wine on the porch with the dogs and laugh about it scenario.


plan D = SeeR sits out and two other players accept the challenge...therfore i will not sit in your Snowmobile Shed in whatever your local russian town is and swipe a barstool without the invite.....unless you have a good TV and Dartboard ...do you ?.

even better yet why dont you two join and take the last 2 barstools in the 4v4 currently hosted with marcuspers and eskild to make the team of 4 with you two Russian Huskies...?