well I think I played very well untill I collected 3stacks on my zone.

Start was lukcy because not hard cites like tomb or legendary, mystic near with can't taken.

But after some points, with 2warlords I couldn't get enough healing for army.

So I had to return for joining priests.

When think about dreadnought, it's definitly weaker than warlord if not use machine.

So can be a little bit stronger till warlord get martical arti and +15 hp research.

but critically absense of MH is so terrible vs like socerror.


About strategic choice after gathering force, I knew that his main army was near.

But as I think his 2nd stack would go some other places and his main stack only will be left to hit and run.

So I I splited army to evolve cavalries to knights.

However he prepared cheap t1 pikes and rushing to me.

Ofcouse I had to scout it but it wasn't possible.

if I send scout, must be killed with his leader invisible stack.

So the best choice was holding 3stacks on my zone as I think.

But with cost of upkeep, it's much painful for me than him....

It was quite tough game vs dreadnought. Novograd has played very solid and I guess if a few little things didn't happen, result could be completely different.

Produced a few shamans and took sphinx temple and lich king castle early, thanks to warlord hero. Lost one important t2 unit because of miscalculation (in heart of the tropics battle) and second one in lich king castle because of first loss and bad luck with maximum damage. It slowed a bit my progress, but not so much.
All others nearest high level sites were impossible to take without good army.

Sent both heroes with main army long way through underground and my leader with the rest of the army to the middle of the surface map.

We met with Novograd in the middle near dragon's dwelling and he had stack of knights. My army was weaker at this moment, but I guess he didn't know for sure and so stealed a few sites and went back.

Then crucial moment of the game has happened. I got quest from dragon's dwelling (which was hostile to me from the start and proposed peace only few turns ago), completed it and made dragons my vassal. I placed my army near dwelling's defenders and Novograd was not able to kill me (he was in few tiles from dwelling).
As Novograd said after the game, he could kill quest's stack but decided don't do it (maybe because after the battle he would have heavily wounded units or even killed, because of dread reaper).

As a sorcerer I wanted to research and summon eldritch horror fast, but after scouting, I saw that opponent are going to focus on producing knights with embrace darkness. I have changed my mind and start building orc's pikemen and summon phantasms. I also had shadow born specialization and even researched embrace darkness, but didn't find time to cast it.

I tried to harass Novograd's cities with invisible floating stack and some scouts. Was able to raze fortress, capture secondary city for one turn and discover the exact location of all cities including throne, but in general it was not really successful.

Novograd was using his favorite trick with mass builders and advanced logistic, so with heroes and knights he could catch me almost everywhere in 18 hexes and I could not proceed further.

In addition he got bone dragon spell (and also obsidian dragon, but I didn't know that) and in perspective he could summon few of them and counter attack me.

Guessing that he has splitted army at some point, I decided to try to attack cities from two different ways and started researching advanced logistic myself.
I continued to harass and killed few horsemen and builders and at some point prepared a bait with phantasm.
It was not actually a "bait", I preferred to keep him, but it didn't have enough move points to retreat after "diversion" and I decided to give it a try.
My "pikemen" army was close to it (as well as leader's flying stack) and bait worked.
I guess Novograd has never seen this army approaching, but one turn ago he was very close to it. 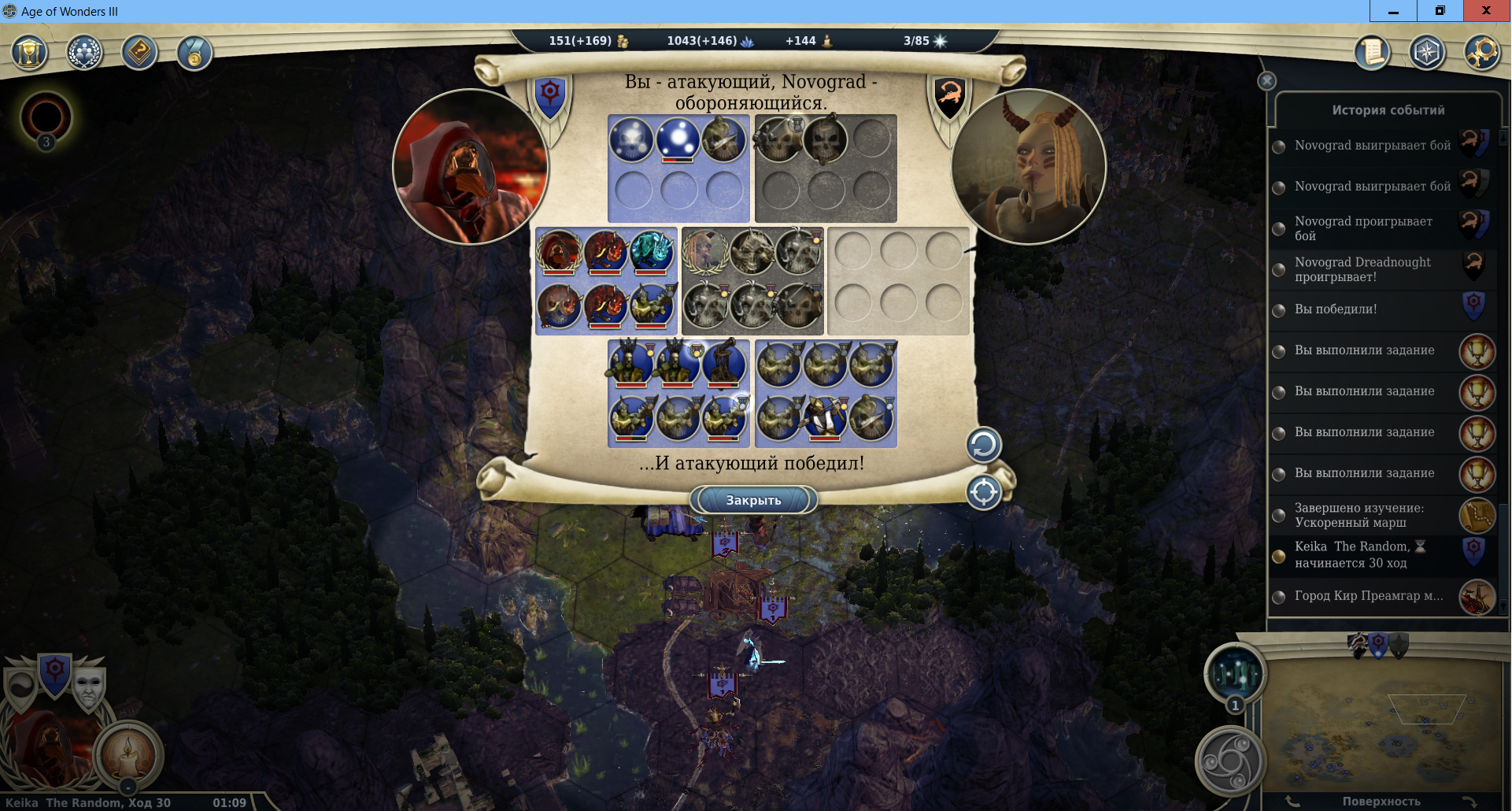 I planned to capture two cities next turn and join army from both ways, but Novograd suprisingly attacked my second army.
I thought that I took quite safe position to prevent attacking by multiple stacks, but I was wrong - he attacked from th e boats.
Anyway I won this battle as well even if he outnumbered me and it was a gg. 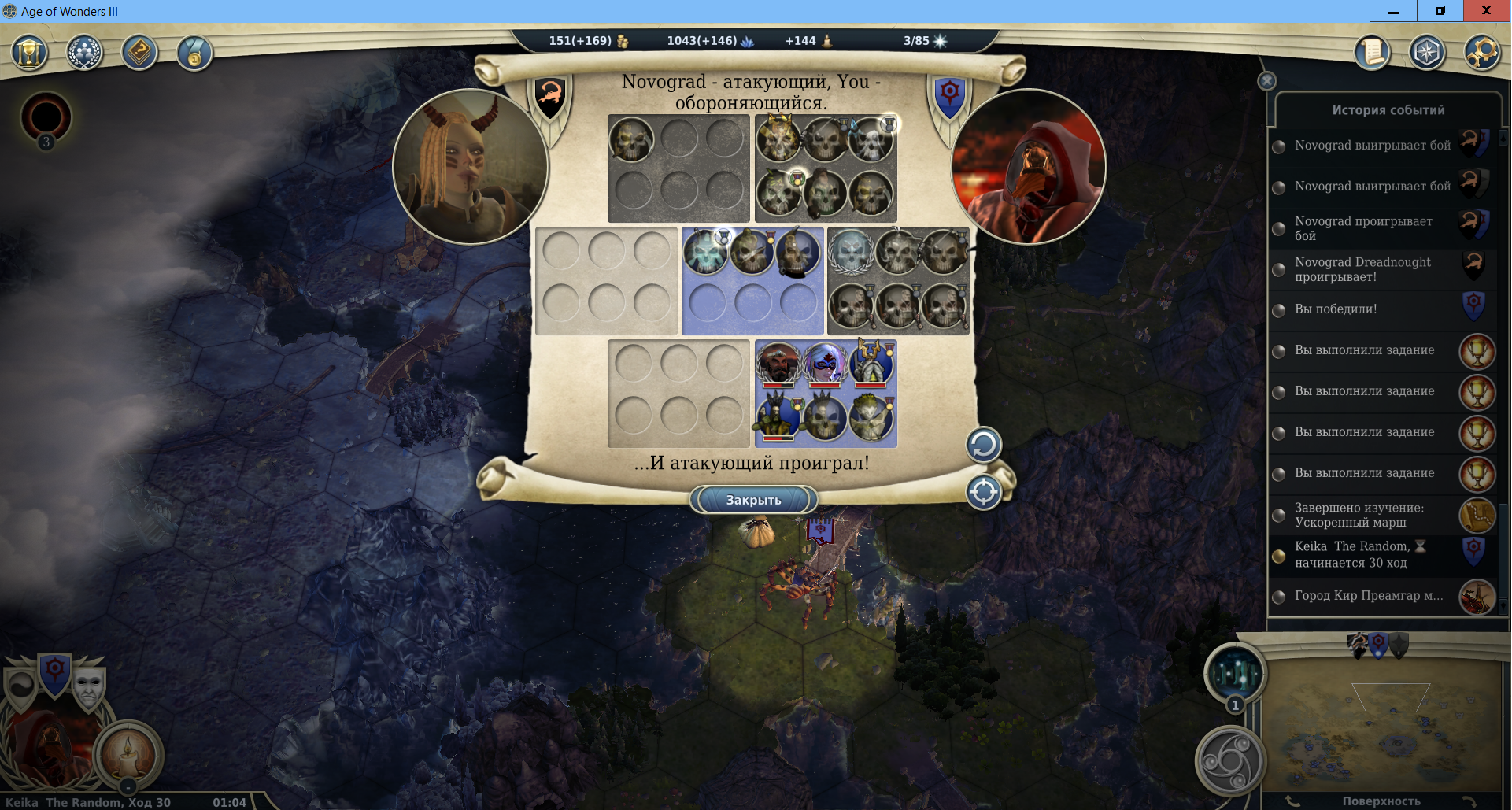 P.S. Everyone knows that AI is stupid. Sometimes you can predict how it will behave and mitigate it somehow, but he never stops surprising you.

I tried to capture throne with draconian flyer defending by halbedier and lost the battle. I had a lot of casting points and good combat spells, but AI didn't cast them.
But at the same turn AI casted combat spells three times in another battle "phantasm vs horseman", it was unnecessary but... he casted them on fucking builder. Even in main battle my leader casted suffocate on builder.
This is so stupid and I think spell's target priority should be fixed if possible.

One more noticeable moment happened in easy battle where my leader casted thunderstorm but it was critically disjuncted and I lost my 85 spell points. Super annoying