The map was very close both underground and ground(specially).
I could reach throne to throne in 5days with 28movement I think.(logistic)
Moreover all my cities were more than 10tile distances from gate
so it was very hard to hit and run compare to last game.
keika said he lost all army in beginning so not usual for me, I planed to rush.
I had about 7stack but I thought that he can'tÂ defend his zone and run away.
so I left 2stack, 2stack to zigurat and wizard tower, 3stack to his throne.
that stack arrangement decided byÂ location not army set.
However he placed 3stack of muskets in his throne.
I'm notÂ sure how he feels about that attack...
For my side, it's better to takeÂ that throne fast and remove any possibility is better than wait 2day for 1more stack.
and about theo stack, it was totally luck. I never expected he enter there because there was dark moon and almost no sight for halfling in underground.
And about leader stack, it was predicted and I saw it 1day before and even made road.

for last giant dwell was really helpful.
it was in just middle of us and gave me 4quests 5~6 ogres.

Was awful game from my side.
Lost all of my starting army in first turns trying to clean sites aggressively because of miscalculation and massive unluck.
Lost a few more units in next battles fighting versus numerous guards, trying to stay in game.

Map was ruthless to me and gave only one ground path and 1/3 of map for me and 2/3 to novograd. No dwellings nor independent cities on my side

As a result, I have built 2 independent stacks of robots/engineers leading by leader and secondary hero and cleaned surface part of my side.

Sent my first theo hero to clean underground with rest of my army (two t1 units) to try to convert units, but failed. There were a lot of moments where enemy survive with 1-2 hp or do maximum possible damage and it costs me a death of my unit.
Game decided that I didn't suffer enough and blocked my way with animal spawn + roaming army (which didn't move for some reason for 2 turns). Could not win 4 vs 8, so I had to search for another way, caught by opponent's main stack and lost 12 lvl hero for nothing.

Realizing that I can't win in direct battle, I started preparing to partisan war and tried to sell my throne with high price as possible, but it was not successful enough.

Battle for the throne:

I still had one invisible stack clearing unexplored part of opponent map and with leader stack I planned to counterattack and raze cities, but when I took one city, I was caught by 2 secondary stacks and lost. 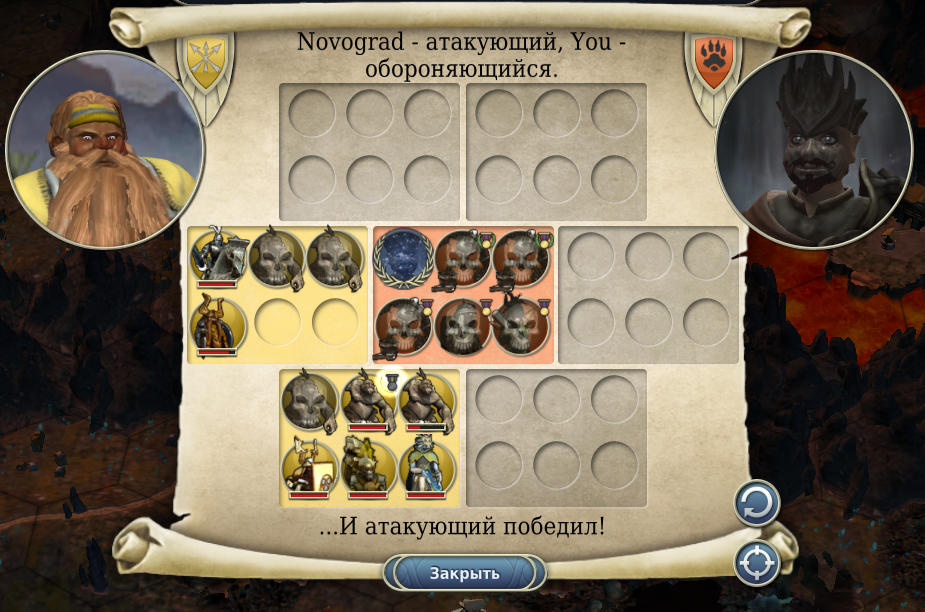