- Change dungeon damage enchantment so that only incorporeal are immune, normal undead still get hit.

- Dread reaper & khthonic guardian show up as site defenders. Why not arch angels? Added bonus, having to fight some arch angels would buff dreadnought as well.

I don't know if you understood what I meant. I am not talking about a hard cap by turn 20 of 5000 army points, it's impossible to implement anyway.

I don't think you are against balance, and I hope you do realize there is an issue with the kind of game you pulled off. It's almost impossible to win against what you did.

So could you please tell us what do you think needs to be changed to prevent this?....

Don't just repeat Dungeons and map. It's not the first time you pull very large armies very early. Actually you almost do it all the time. So it is not map specific.

Regarding site rewards, just help balance them and maybe your butt will be burning less often.

It is your opinion and I don't support it. I don't like artificial restrictions. Why do you even capped yourself with turn 20 and 5k points?
If you can reach it and even more - it is totally fine.
(if you still don't want to live without restrictions, change it to turn 25 and 10k and everything would be fine for you)

Army depends on the map. This particular map was rich and there were no opportunity for early attacks, so the only one thing to do is to expand.
Just for understanding, I took 4 dungeons before turn 20 and also got T4 as a reward.
In very few maps you can repeat this, simply because you don't have such sites. This fact also can explain higher score.

> Am I seeing that right, 3x Lord of the deep

Yep. 3 sunken cities - 3 lords of the deep. And some people want even more randomness in the game, lol.
What is really frustrating for me is that defenders quite often are not correlating to the reward.
Sometimes you really break your balls trying to take sunken cities defending by lord of the deep, three sirens and two mermaids which damage you on the first turn and then... get some weak spell.
In this game all three sunken cities were defended by undeads.
3 wraiths (one king) and two banshees... 5 average units for T4.

The same with ziggurats... very challenging defenders 2 phoenixes, 4 tigran warbreeds and sell price is 270 gold.
For legendary sphinx temple you can get like 380RP or 500 gold. My butt is burning every time when I see this.

>am i correct in understanding that it doesn't just give research but also lets keika know precisely which sites I'm clearing??
It gives additional research for owner battles. And yes, it shows battles "result window" for those which are close enough (16 hexes?) to cities or forts.
Published on Fri, 09 Apr 2021 23:13:38 +0200

Regarding necro balance, they have far more going for them than other leaders. If the goal is to get them balanced...I think that's a tall order.

- Necro heroes have multiple forms of conversion, starting with lvl 5 control undead.
- Reanimator debuffs make ghoulifying units even easier. Other classes don't have curse + inflict spirit weakness.
- Raise corpse is a strong ability
- Corpses are strong T1s, having intrinsic healing w/ devour corpse and getting resurgence at elite
- Whispers of the fallen seems strong, also am i correct in understanding that it doesn't just give research but also lets keika know precisely which sites I'm clearing??
- Other strong necromancer hero abilities: throw curse, undying, reanimate undead
- Undead are able to clear high lvl sites much easier than any other leader due to unit attributes:
blight immune, high cold resist, immunity to fear/mind control/touch of death/swallow whole (tho not sure if this immunity is working for all undead or just incorporeal). As far as balance goes, I think this could be the hardest part to address...

My early game was normal enough, didn't lose any heroes, biggest mistake was probably losing my starting T2 around turn 7. Somewhat unlucky in battles and conversion attempts, also felt significant pressure from Keika rather early in the game, lost some efficiency on running away or playing defense. I did get a decent economy going, at the game end started producing trebuchets 1/turn in main production city, as the city had flowrock quarry & i felt they could be quite useful vs. the blight & spirit damage of necro troops.

Kieka had a great view of said city from the magma, nothing i could do early game to keep out the prying eyes. I had a fun plan for it though: fairies. Took the fairy dwelling...and the game ended before i could produce a single fairy.

At the end of the game, my leader stack was mostly T3 spiders and had great mobility underground. Even if any of Keika's nearby armies were in range, would have great difficulty dealing with any of them between being outnumbered, 150hp warbreed (or that troll in the other), and the centurion lvlup boosting Keika got on T22.

Well done attacking the baby druid stack at the end. Would have been able to evolve some baby animals with the column of champions, thought Keika would have some troops in range of the berries to attack me there but I didn't expect him to already have a second stack in range. gg.

What do you think should be changed to prevent that?

Researching reanimator, leveling and evolving as usual. Scouted column of champions not so far from the starting position and got key level 9 on both leader and hero and also two elite reanimators early.
Was crazy lucky in early conversions and got reanimator, knight, warbreed and two draconian flyers.
With a few more produced reanimators I opened multiple fronts quite early.

Searching for the whispers of the fallen and casted it on turn 10 or so. That gave me a huge boost in researching. Next goal was healers of the dead, but I had to research all necro empire upgrades available before I realized that it is blocked by lower level upgrades from specs (for some reason I thought that they are treated separately).

Turns 10-15 were very hard. Each turn started questioning, can I survive one more turn without disbanding the army or not, but after taking a couple of high level sites and forming separate death squads I started banking gold.

Fighting everywhere, trying to convert in every battle, raising tons of cadavers, non-stop producing units, buying from the inns and getting as a reward, I dominated on the map.

At turn 20 I had 10 separate cleaning squads all over the map and my armies approaching the opponent from different sides.
I found opponent’s two secondary stacks by scouts and whispers of the fallen revealed two more main stacks.
With whispers of the fallen and master cartographer which I researched on turn 20, it became even easier to plan my moves.

At turn 22 I completed centurion and paragon empire quests summoning bone dragon and angrynarwhal started suspecting that something is not ok.

At turn 25 the map was explored by 90% and I think we could finish it in the next 4-5 turns, so I started consolidating my stacks together preparing for battles.

We were dancing with secondary stacks a couple of turns and finally I catched one group with the help of whispers and berries. 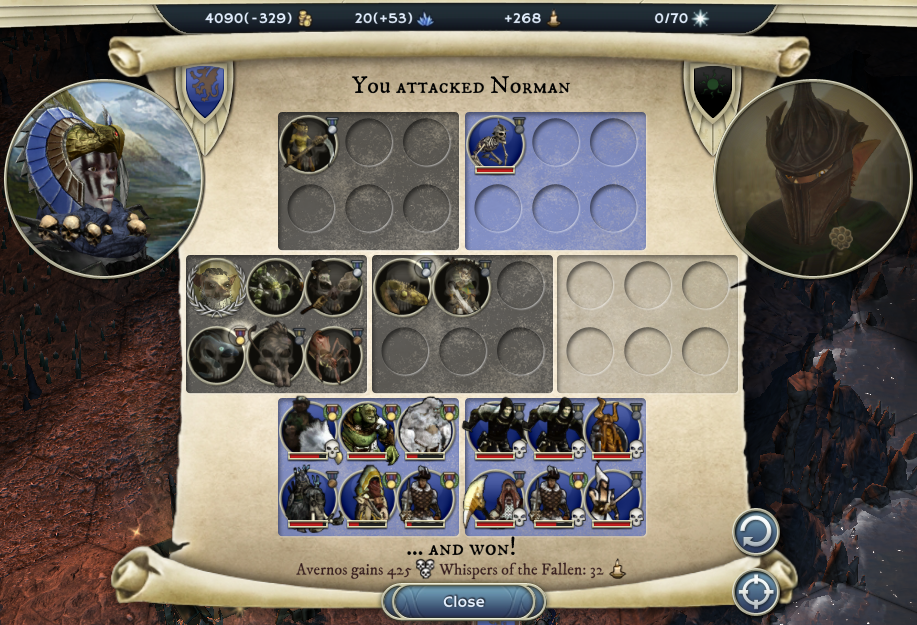 It was the only one major battle in the game, but after it angrynarwhal surrendered next turn.

Did you ever see crying cadavers? They tried so hard and they WANTED a great battle to be a hero.
I cared so much for my cadavers... 9 elites, 6 champions. Their brothers who were chilling in the throne the entire game are laughing at them now.

It was an insane game as a necromancer and I had 972 gold and 157 mana army upkeep per turn in the end. 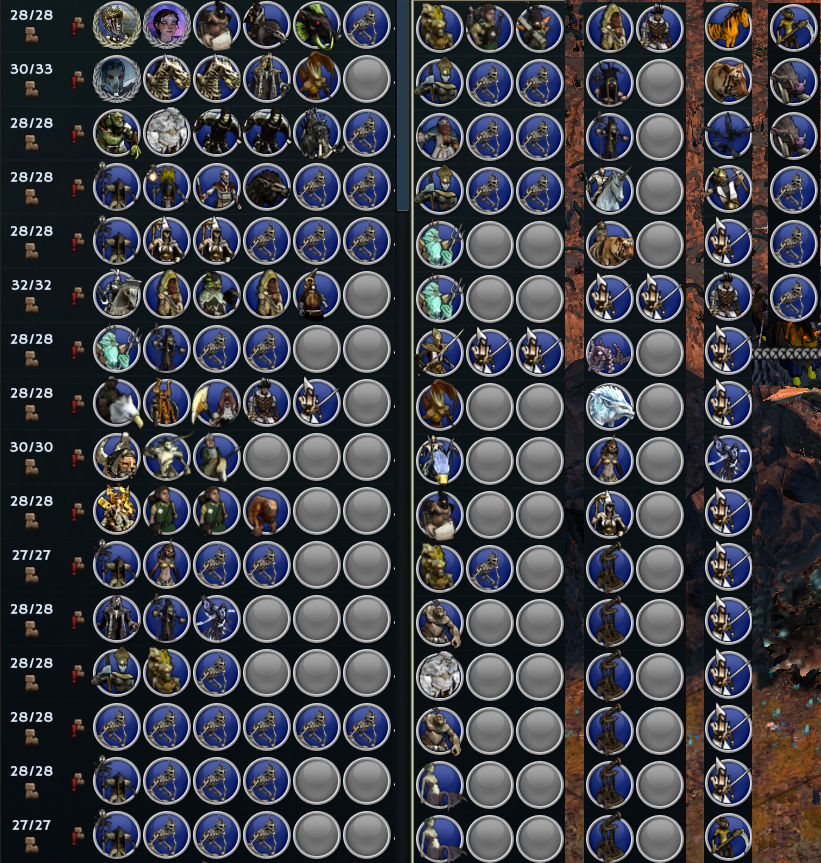