https://age-of-wonders-3.fandom.com/wiki/Template:Guild_of_Shadow_Thieves seems pretty clear to me that it's 5% of the caster's income. What didn't work in your opinion?

Got the rogue second hero and picked him. Leveled up both heroes to level 7 early to convert as many units as I can to split the army. Evolved 4 storm sisters at turn 10 or so and with all converted units decided to open multiple fronts at the same time.
Each stack had a storm sister to stun and conversion ability (from bard or leader/hero) and could clear even strong sites successfully.

Playing vs warlord, I thought that I have to attack my opponent as fast as I can, having more army early and try to raze some cities and slow him down. In late game it would be hard to stay in game versus mass cheap 40MP monster hunters.

After researching bards I was thinking, should I rush stalkers or search strategic spells and focus on them, but another lost library made the choice for me - after getting some strategic skill, treasure raiding skill has appeared in the book and corpse looting skill just right after it.

It was really useful, with both spells active I got a lot of gold from 5 different sweep teams in the middle of the game.

I was slowly but surely moving to Novo's cities and gathered almost 3 stacks of good units. I scouted his main stack presence and also found a secondary stack leading by hero. Both armies were quite far from the cities and I decided to join my leader's and second hero forces and attack the cities.

Initially I considered it as an option to sneak with my swimming/floating leader’s stack, capture the throne and cast scorched earth, but then I abandoned this plan, because it was risky. My army was much slower than his MH and irregulars in the arctic and I didn’t know how much army he had there.

I have found his vassal and moved 3 my main stacks closer to it and attacked. Surprisingly it was very easy battle and I didn’t lose anything: 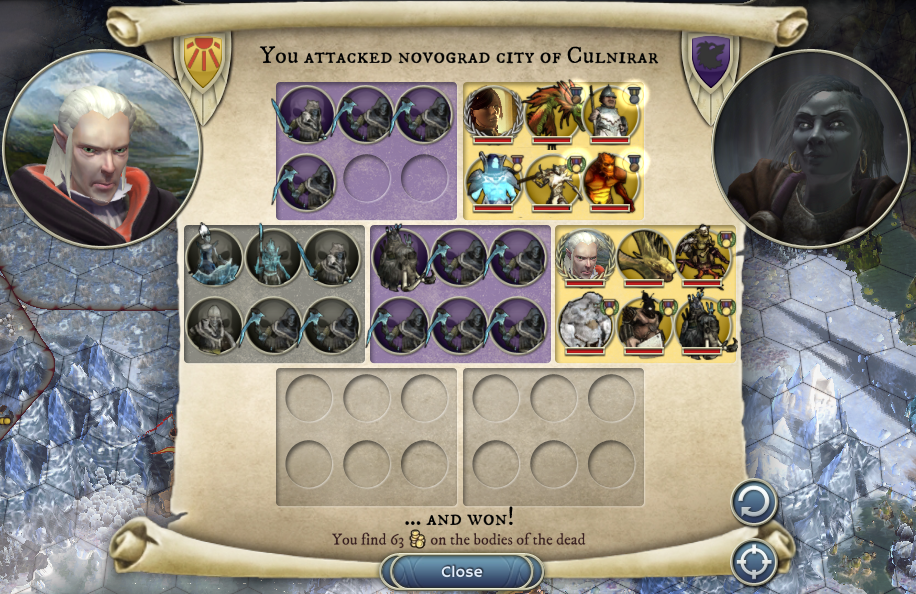 At the same time I was trying to catch his secondary stack with my secondary stacks. I was tracing his stack for a long time and finally was able to set up a trap.
He went underground, cleared a few sites and I was sure that he will take the column of champions next turn.
He had halfling nightwatch recon there and it could reveal my trap and so I decided to make a simple trick and surprisingly it worked perfectly.
I placed my crows in a bit of a different direction not so far from the nightwatch, but in his vision range to distract him.
So my trap worked and I attacked his secondary stack on the same turn as I captured his vassal.
Actually I was not sure who caught whom, but luck was on my side and AI didn’t screw the battle. 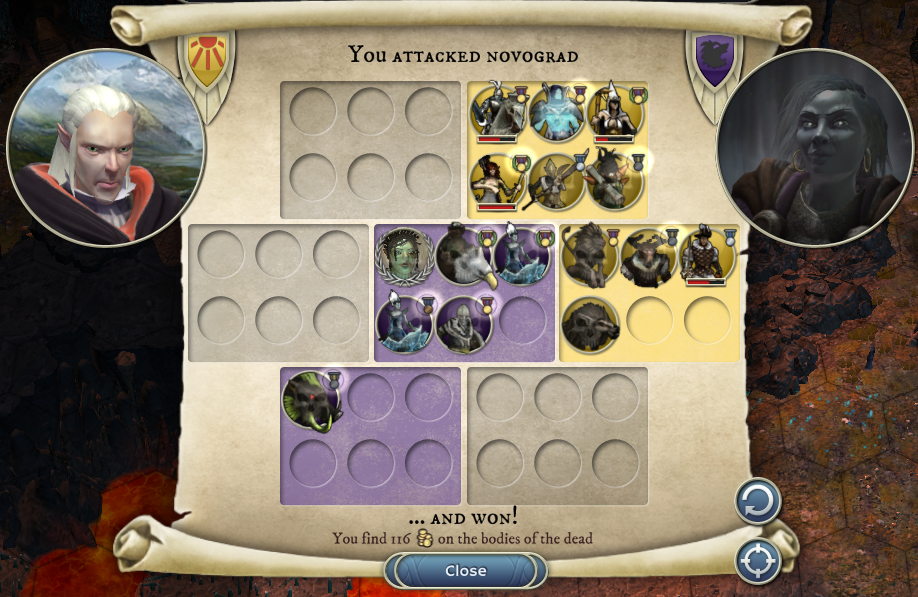 Novo surrendered on the next turn and I didn’t even see his main army.

I tried to use the “Guild of Shadow Thieves” spell and casted it twice on vassal and Novo’s city, but it looks like it was not that effective. It also works in a strange way giving 5% income calculated from my own total income, not the affected city income which is weird to be honest.

Also I can say that clearing sites with trash units is quite challenging, but at the same time rewarding. And also it is very painful and tedious to manage HP and fight with deadly wounded units. I started to value every single unit, don’t send them as “scouts” to be killed by independents and even boar could be very helpful in battles.
Published on Mon, 30 Nov 2020 20:13:10 +0100